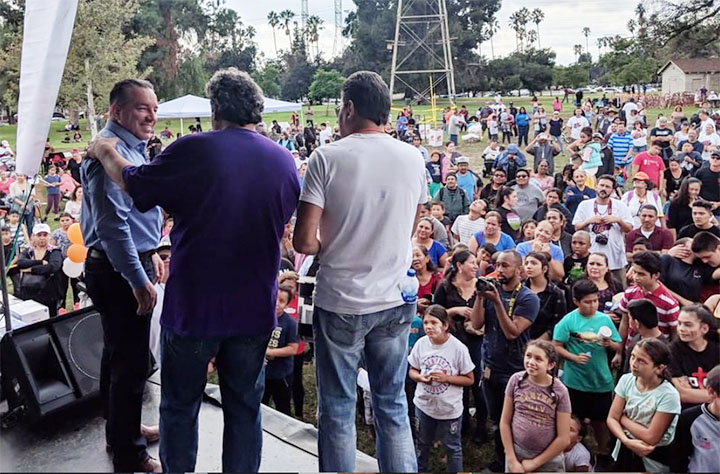 “If I’m elected, on day one, we’re going to set an entirely new course for the organization,” Alex Villanueva told WitnessLA in an interview way back in July 2017, before the primary election for Los Angeles County Sheriff began to heat up.

“It’s going to be one that is built on public service, not self-service. The decisions we make are going to be driven by facts, not by agendas. That’s what this department needs.”

So what has new Sheriff Villanueva been doing about keeping that and other campaign promises since he was sworn in on December 3.

Quite a lot, as it turns out. And, although some of his moves have been controversial, other steps—like his meeting with members of the Civilian Oversight Commission last week about pushing ahead almost immediately to get much-delayed body cams for deputies— are heartening.

Bring on the body cams

Not all of the checklist of reforms that Villanueva talked about during his campaign equally appealing to the broad range of voters who put the new sheriff into office.

But one reform that is likely to please the department’s rank and file, and their union, the Association for Los Angeles Deputy Sheriffs (ALADS) which backed him with substantial cash, while also pleasing the members of the 36 or more progressive voter clubs that endorsed Villanueva, was the guarantee to break through the perplexing barriers—both fiscal and bureaucratic—that have somehow kept the LASD from acquiring body cameras.

It didn’t seem to matter that most every other major law enforcement agency in the nation—including the Los Angeles Police Department—has managed to get the things.

Last week, however,  the new sheriff met with a cluster of representatives of the department’s Civilian Oversight Commission (COC) and told them that he wanted to move ahead quickly with the much stalled body cams, and was aiming for aiming for the first quarter of 2019—instead of the three or so years that McDonnell was predicting.

Moreover, said Villanueva, he believed he could do the program for many millions less that the original $84 million, which department sources suggested had been “inflated.”

(If you’ll remember, when we last checked in on the body cam issue in August of this year, then Sheriff McDonnell and the board of supervisors were still dithering over whether to implement an October 2017 report from the County CEO and the sheriff which priced getting the body cams for the LASD at $84 million, with the hiring of 304 people, and a jaw-dropping four-year-long phase in—even though the department had already done an extensive and very successful model program at four LASD stations—Carson, Century, Lancaster, and Temple. The program tested four brands and five models of body-cam systems, deploying a total of 96 cameras, from September 2014 to April 2015, and it was a rousing and informative success.

Yet, Sheriff Villanueva says he can break through all of the roadblocks before the first quarter is out.

Of course, getting the cameras will require the approval of the supervisors, who must allocate the necessary money. But if his budget is as lean as dollar amount he quoted to the COC representatives, we presume approval will not be too difficult a hurdle to clear.

ICE out of jails

During his campaign Villanueva told WitnessLA, and such supporters as the Chicano Latino Caucus, which bills itself as the largest Latino Democratic party organization in the nation, that he planned to keep ICE representatives out of the county’s jails.

“There’s so much inaccuracy going around about immigration policy,” Villanueva said at that time. “For instance, people don’t know that SB 54 [known officially as the Values Act] allows for the transfer of dangerous felons to ICE custody, which it does.”

But, while he will follow the law, and transfer inmates to ICE whose convictions qualify, he said, he will remove ICE agents from “all jail facilities,” he said.

On Tuesday, December 18, the sheriff appeared at the LA County Board of Supervisors meeting and reiterated his stands on immigration issues.

“We’re going to physically remove ICE from the county jails,” he told the supervisors and those in the audience.

Neither Lee Baca, nor Jim McDonnell took that step. Under McDonnell, the names and fingerprints of people booked into the county’s jails, plus lists of inmates who were coming up for release, were sent automatically to ICE.

The new LASD will do neither, according to Assistant Sheriff Robert Olmsted, and Commander Elie Morejon, the two members of Villanueva’s command staff who stayed behind after the sheriff left to fill in the details.

Morejon and Olmsted noted that since inmates’ release dates are posted publicly in the Inmate Information section of the LASD’s website, for the use of friends and family who need the information, nothing prevents ICE from finding that same information, and scooping up inmates the minute they step off county property. Consequently, Morejon said, the department was going to “re-valuate” that element of the website to see if its usefulness still outweighs potential harm it could produce for undocumented inmates.

In November of this year, just before the final vote count arrived, Villanueva announced his intention of getting rid of the two Constitutional Policing Advisors, Diana Teran, and Sergio Perez, who had been hired by Sheriff Jim McDonnell.

In an interview with Frank Stoltze for LAist, the soon to be new sheriff declared the attorney/advisors “a dog and pony show,” that focused too much “on misconduct of deputies,” while ignoring misconduct by command staff, and “systemic issues” including “racial profiling.

“You had a lot of issues of deputies involved in criminal misconduct that was concealed for a long time.”

Villanueva said he planned instead to launch a “truth and reconciliation commission” that would review potential wrongful convictions and possible wrongful terminations of deputies.”

The deputies’ union expressed delight at the new sheriff’s intent to dump the civilian Constitutional advisors.  But reform advocates, like Peter Eliasberg, of the Southern California ACLU, and a long list of others, were alarmed.

Now, however, Sheriff Villanueva has reportedly retooled his position, and says he will hire Constitutional policing advisors of his own, in addition to the truth and reconciliation commission.

Brass and other accessories

Another early move the new sheriff made, that he seems to have retooled slightly afterward, occurred on Tuesday, December 4, the day after his swearing in.  Villanueva spent his first day on the job leading what he would describe in a follow-up email as “a unique training day that involved the entire brass of the Department, from the rank of lieutenant and above.”

At this “training,” Villanueva showed a video by legendary football coach, Lou Holtz, in which Holtz delivers his three rules for reaching “your true potential.”  For the record, they are: