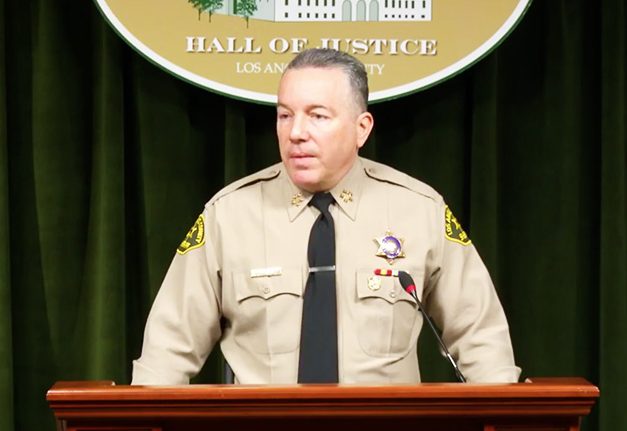 On Friday, the California Attorney General’s Office announced an investigation into whether the Los Angeles Sheriff’s Department has engaged in unconstitutional policing. Attorney General Xavier Becerra’s announcement comes, his office said, “on the heels of allegations of excessive force, retaliation, and other misconduct” involving members of the department.

AG Becerra also launched the civil investigation of the sheriff’s department’s patterns and practices in response to a lack of “sustained and comprehensive oversight of LASD’s operations.”

Sheriff Alex Villanueva — a controversial leader who has spent much of his time in office fighting against the oversight efforts of Inspector General Max Huntsman and the Civilian Oversight Commission (COC), as well as the LA County Board of Supervisors — said his department was “eager” for the “non-criminal ‘pattern and practice'” investigation to begin, “in the interest of transparency and accountability.”

“Our Department may finally have an impartial, objective assessment of our operations, and recommendations on any areas we can improve our service to the community,” the sheriff said. “During my administration, we have routinely requested the State Office of the Attorney General to monitor our investigations, and we will provide immediate access to all information in our possession.”

The sheriff has a history of blocking IG Huntsman and the COC from accessing department information, according to the civilian overseers, even after Huntsman and the commissioners gained subpoena power.

On October 15, a fed-up civilian commission approved a resolution expressing “no confidence” in the sheriff and calling on Villanueva to resign. A month later, in a 3-2 vote, the county supervisors passed a motion triggering an investigation into the question of how the board could best go about removing an elected sheriff — including via changing the county charter or county code.

In response to the new civil rights investigation, the commissioners issued a statement saying they welcomed “this important inquiry as a step toward realizing our collective goal of a department that is transparent, accountable and one which operates in a manner consistent with our constitution.”

Throughout the investigation, the AG’s Office says it will consider information from community members and local organizations, officials, the oversight bodies, sheriff’s officials and members of the department, and others.

Last month, a report from Inspector General Max Huntsman addressed the issue of “unlawful conduct” within the sheriff’s department. The report focused predominantly on the sheriff, and pointed to a number of instances in which Villanueva did appear to have acted unlawfully.

Huntsman pointed to several rulings by judges who took issue with the department’s view that it is not beholden to laws that limit its power. In one of those rulings, a judge found unlawful Villanueva’s attempt to reinstate former deputy Caren Carl Mandoyan, who had been justly fired based on allegations of domestic abuse, stalking, and spying on his ex-girlfriend, who was, at the time, also a deputy also working at the department.

Also explored at length in the report was the sheriff’s general disregard for the COC and OIG’s subpoena power, granted first by the LA County Board of Supervisors, then affirmed via voter-approved Measure R, before being triply guaranteed when CA Governor Gavin Newsom signed AB 1185.

“There are serious concerns and reports that accountability and adherence to legitimate policing practices have lapsed at the Los Angeles County Sheriff’s Department,” said Becerra, whom President Joe Biden recently nominated to serve as U.S. Secretary of Health and Human Services.  “We are undertaking this investigation to determine if LASD has violated the law or the rights of the people of Los Angeles County.”

“Those of us in positions of public trust,” Becerra said, “know that the job comes with the solemn obligation to be accountable to the people we serve.”