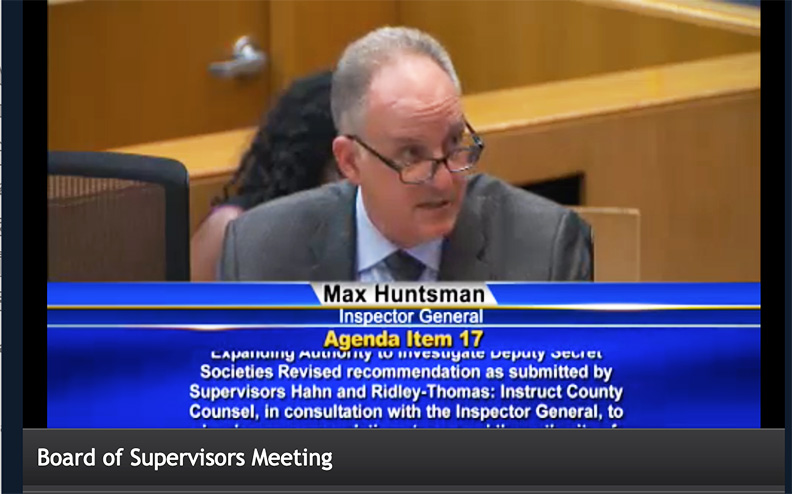 On Tuesday, July 23, the Los Angeles County Board of Supervisors voted unanimously in favor of a motion, co-authored by Supervisors Janice Hahn and Mark Ridley-Thomas, to direct County Counsel to develop recommendations within the next 30 days to expand the authority of the Office of the Inspector General to include subpoena power, in order to look into the issue of deputy cliques in the LA County Sheriff’s Department, and also to enable the OIG’s “ongoing review of matters involving” the LASD in general.

In truth, the unanimous vote was nearly a foregone conclusion. 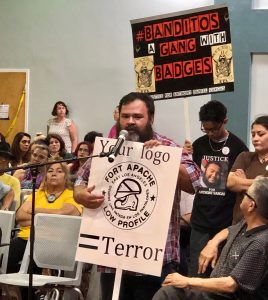 Community members speak out against the Bandito’s clique, and the reinstatement of the ELA station’s logo, at East LA town hall meeting/WLA

Regarding the motion, both authors Hahn and Ridley-Thomas, among others, made strong statements about the need for the motion, and why the time may have come for subpoena power.

Yet, the true drama at the meeting was not the vote or the array of statements by the motion’s proponents and opponents.

The true drama was in the remarks made by Inspector General Max Huntsman.

Huntsman is generally known for his calm, straight-shooting approach.  Yet, he is not prone to any kind of scorched earth oratory.  This time, however, while Huntsman’s tone was still even, there was a visible underpinning of urgent ferocity.

Huntsman first thanked the supervisors for bringing the motion, because, he said, “we’re at a crossroads now where this is critical”

He described how for 50 years the management of the Los Angeles Sheriff’s Department had gone out of their respective ways not to investigate the LASD’s deputy gangs.  Then he laid out briefly the way that each sheriff, from Sherman Block, to Lee Baca, to interim Sheriff  John Scott, and finally Jim McDonnell, all found their individual ways of ducking, covering, and head-in-the-sand behavior when it came to investigating and rooting out the department’s deputy cliques.

Lee Baca, was of course, the most notorious for his denial.

“The public finally learned that his number two was a Viking,” Huntsman said dryly, when Baca and his undersheriff were convicted of multiple felonies “in federal court.”

The current sheriff ran as a progressive reformer, Huntsman continued.

“But instead of reforming, he has advocated a Fort Apache bunker mentality for the whole department, not just East LA.”

(For those unfamiliar, the Fort Apache reference pointed, in this case, to the less-than-community-friendly logo of the department’s East Los Angeles station that, in a controversial move, Sheriff Alex Villanueva recently reinstituted.

When the new administration came in, Huntsman said, he wrote Sheriff Villanueva a letter welcoming him and inviting him” to work together on secret societies “and the monitoring of the new sheriff’s proposed Truth and Reconciliation strategy.

“I received no response,” Huntsman told the board and those observing the meeting.

He then detailed how the response from the upper reaches of the LASD went precipitously downhill after that.  According to Huntsman, the department’s upper management went so far as to circulate an email telling department members “not to cooperate with our office,” then claimed that the OIG was” conducting nonexistant investigations” of a nature that was in violation of county regulations,  but declined to show any evidence of the supposed wrongful probes.

At the same time, Huntsman said, the LASD has denied the Office of the Inspector General access and documents that county ordinance says the OIG must have.

Huntsman also ticked off a list of other behaviors he found concerning.

“Background checks for incoming deputies appear to have been radically scaled back,” he said, “and the administration has refused to allow us to monitor the hiring process and ignored our document requests.”

Plus after his office began reporting on the administration shutting down internal investigations “in violation of the department’s own policies,” and at a rate that exceeded even that of the era of  Paul Tanaka, “a man who was famously hostile to evidence of misconduct.”

The response to his office’s report, said the Inspector General, “was not to correct the violations, but to throttle back” the OIG’s “computer access to those records.”

Then, at the very end of his presentation, Huntsman delivered the meeting’s truly head-snapping message, and he did it calmly and quietly.

“I was hired in part to tell you if we ever faced a Tanaka-level crisis again,” he said his gaze turned on the board members.

If the county doesn’t want to simply “stand by and watch,” Huntsman concluded, we’ll need a stronger ordinance, one that rejects secrecy and has strong mechanisms for enforcement.”

Again, the purpose of the just-passed motion is to direct the County Counsel, in consultation with Huntsman and his office, to report back in 30 days on the idea of granting to grant subpoena power to the Office of the Inspector General, in order to aid the OIG in effectively investigating the deputy gangs that appear to still be running rife through the Los Angeles Sheriff’s Department, if recent filings of deputy gang-related civil rights lawsuits and recent settlements of other deputy-gang-related civil rights lawsuits are any indication of the matter.

According to the motion, Huntsman had requested expanded authority in order to have the ability to help the board “better understand of these secret societies,” as well as the ability “to issue subpoenas should the Sheriff’s Department continue to deny access to information and refuse efforts by the public to hold them accountable.”

Los Angeles County Sheriff’s Department command staff member, Assistant Sheriff Maria Gutierrez, has abruptly resigned from her position. Gutierrez was among the first to be named by Sheriff Alex Villanueva when he was announcing his picks for the department’s top tier staff members after his swearing-in last December. Her sudden retirement was reportedly a surprise for many.