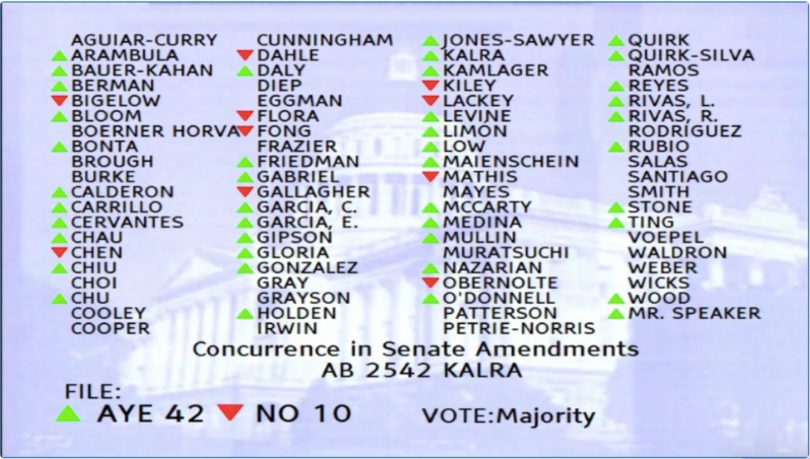 Monday was the final day of the legislative session, and thus the final day for California lawmakers to shuttle bills off the house floors and onto Governor Gavin Newsom’s desk. This was made more difficult by coronavirus-related delays that first eliminated two months, then a handful of the very last workdays before the legislative cutoff for passing bills.

And while the Senate and Assembly sent approximately 200 bills to Newsom on Monday, many bills, including important criminal justice reforms proposed in response to protests over police killings, were abandoned when the clock struck midnight.

One of the missed legislative opportunities that troubled justice reform advocates the most, was Senator Steven Bradford’s SB 731, a bill to allow CA justice officials decertification of law enforcement officers fired for misconduct or convicted of certain crimes “against public justice,” including falsification of records, bribery, or perjury. In this way, the bill would stop those officers from being able to jump to a new city and a new job in law enforcement.

Because lawmakers left SB 731 — which was heavily opposed by police unions lobbyists — so far down the list of bills on the agenda, they were unable to get to it before the legislative shot clock ran out.

S.B. 731 is dead for now. Tonight, #CA Democrats FAILED communities impacted by police violence. They failed to take one basic step to decertify abusive police officers that 45 other states have already implemented. We tried doing it their way. We got next. #SB731 #NAH

We will continue to insist on reform & hope that @CAgovernor signs the modest proposals in his possession.#WatchWednesday pic.twitter.com/aHWm4sBm8Z

When asked during his September 2 COVID-19 public update, whether he would call legislators back into a special session to take up some of the bills they failed to address on the house floors, Gov. Newsom indicated it was a possibility. “If necessary, I’m open to that,” said Newsom, adding that he had been looking forward to having some of the discarded legislation land on his desk. Reopening the legislature for limited business, he said, would have to occur in response to a very specific set of circumstances.

There were other controversial bills, also opposed by law enforcement lobbies, that were ultimately abandoned, including Sen. Nancy Skinner’s SB 776, which aimed to build off of 2018’s police transparency bill, SB 1421, by further increasing public access to long-hidden police records. (Read more about this bill here.)

Also left out of the stack of bills awaiting Gov. Newsom’s signature was Assemblymember Lorena Gonzalez’s AB 66, which would have banned law enforcement from using “less lethal” weapons — including tear gas, pepper balls and spray, rubber bullets, and beanbag rounds — on peaceful protesters, in response to a verbal threat, in response to individuals’ failure to follow police directives, or to enforce curfews.

A handful of protest-focused and police use-of-force bills did make it out of the final, COVID-abbreviated gauntlet, however.

Grantees will receive a minimum of $250,000 per year to administer their programs.

Under AB 2054, an 11-member advisory committee, selected by Governor Gavin Newsom, the Chair of the Senate Rules Committee, and the Speaker of the Assembly would first develop criteria for grant applications, then review resulting proposals, determine which organizations will take on the responsibility of emergency response, and oversee those grants. To be eligible, organizations must already be operating in at least 10 counties. (Read more about the bill here.)

AB 1185, a bill that would establish — reaffirm, really — that county supervisors have the authority to create civilian oversight commissions and inspector generals. The bill, by Asm. Kevin McCarty, would further clarify in the state law that those oversight bodies have the power to subpoena documents from sheriff’s departments.

Not surprisingly, this bill is opposed by the California State Sheriffs’ Association.

“Specifying this authority in statute will create undue pressure within county governments to create an adversarial relationship with another county office,” the association said. “AB 1185 also potentially codifies language that creates constitutional separation of powers issues.” (This adversarial relationship between sheriff and oversight certainly exists in LA County.)

Another bill introduced in response to protests over fatal police encounters, AB 1506, would increase oversight of law enforcement across the state by establishing the Statewide Officer Deadly Force Investigation Division within the Department of Justice. This division would “upon request of a law enforcement agency or District Attorney, conduct an investigation into an officer-involved deadly-force incident, provide written findings, and if applicable, conduct the prosecution of the officer(s) involved.” The bill by Asm. McCarty, would also create a Police Practices Division to review “patterns and practices” of law enforcement agencies that request a review and recommendations for improvement.

One of those surviving bills, SB 629, by Sen. Mike McGuire (D-Healdsburg), would guard journalists covering protests and other demonstrations from being “intentionally assaulted, interfered with, or obstructed” from reporting by law enforcement officers. The bill comes after a number of alarming stories of journalists getting pepper-sprayed and taking painful hits from rubber bullets in the head, and neck, and even being blinded by direct shots to eyes, despite identifying themselves as members of the press.

Also approved by both houses was AB 1196, introduced by Assemblyman Mike Gipson (D-Carson) to bar law enforcement agencies from using carotid restraints, chokeholds, and “other techniques or transport methods that involve a substantial risk of positional asphyxia.”

SB 480, by Sen. Bob Archuleta (D-Pico Rivera), would bar law enforcement officers from wearing camouflage or uniforms substantially similar to the uniforms worn by members of the U.S. Armed Forces.

Other Proposed Justice Reforms of Note

Fighting Racism in the Courtroom

One of the most noteworthy of the approved bills, AB 2542, titled the “California Racial Justice Act” by Assemblymember Ash Kalra (D-San Jose), will “prohibit the use of race, ethnicity or national origin to seek or obtain convictions or sentences.” In 1987, a U.S. Supreme Court decision in McCleskey v. Kemp established that defendants must prove that the prosecution was “intentionally” discriminatory when challenging racial bias in their legal process. This decision set a nearly impossible-to-meet standard of proof. In addition to prohibiting the use of race in convictions and sentencing, the CA Racial Justice Act also seeks to create a system for defendants to challenge alleged racial bias at trial or after a conviction.

Housing Incarcerated Transgender People According to Their Gender Identity

A two-year bill from Senator Scott Wiener (D-San Francisco) seeks to ensure that transgender individuals in state prisons are housed according to their gender identity, “unless the incarcerated individual’s perception of their own health and safety needs requires a different placement, in which case the person shall be housed in accordance with their stated health and safety needs.”

The bill, SB 132, also requires prison staff to place a person in housing (single cell, double cell, dorm, protective custody, or general population) based on the incarcerated individual’s perception of their health and safety.

Incorrect housing “puts these individuals at great risk of physical assault and sexual victimization, and reduces access to programming that creates a successful transition from prison back to their community,” said Sen. Wiener. “The risk of violence often leads to incarcerated transgender people being placed in isolation ‘for their own protection,’ resulting in loss of access to medical and rehabilitation services and leads to increased recidivism rates.”

AB 1950, by Asm. Kamlager, would reduce the maximum probation term for a misdemeanor (currently 3 years for most crimes), to one year in most cases, and would set a limit of two years of probation for most felony convictions. The bill is expected to save the state hundreds of millions of dollars, if passed into law.

“The purpose of the bill,” according to Drug Policy Alliance, “is to end wasteful spending, to focus limited rehabilitative and supervisory resources on persons in their first 12 to 24 months of probation, and reduce the length of time that a person might be subject to arbitrary or technical violations that result in re-incarceration.”

Another bill to address over-incarceration, AB 3234 would lower the age limit for elderly parole from 60 to 50, as long as an individual has served at least 20 years in prison. The bill by Asm. Phil Ting would also create a misdemeanor diversion program that would allow judges to divert a person from jail over the objection of a prosecuting attorney.

State legislators are also hoping to reduce commissary prices and phone call costs and eliminate some service fees for jailed adults and kids in probation camps — and their family members, who often bear the financial burden of communicating with locked-up loved ones.

A 2018 Prison Policy Initiative report found that 75 percent of commissary purchases in prisons and jails were for food and drinks (followed by hygiene products), indicating “a widespread need to supplement the food” that carceral facilities serve. Commissary items are often sold at markups far higher than what it would cost to purchase the goods from a regular store.

Generally, families are picking up the outsized tabs for commissary purchases, phone calls, money transfer fees, and other charges that can add up to hundreds of dollars a month. (At the same time, the husbands, wives, and children of incarcerated people often suffer the loss of their incarcerated loved one’s income.)

Under SB 555, by Sen. Holly Mitchell (D-Los Angeles), local sheriffs and probation departments would not be allowed to sell commissary items for more than 10 percent above the cost paid to the vendor.

The bill also aims to cap jail phone call and video call rates at $.05 and $.25 per minute respectively. Certain fees for money transfers and other financial transactions would also be eliminated by SB 555.

If signed by Gov. Newsom, SB 369 by Sen. Bob Hertzberg, would create a reentry commission at the state level. This advisory commission would be tasked with creating a grant program for community-based reentry services, as well as building a health and safety agenda for people returning to their communities from prisons and jails. The commission would also conduct a review of thousands of barriers to successful reentry that formerly incarcerated people face, write a reentry guidebook, and set up a clearinghouse of reentry resources online.

The first bill, AB 2992 by Assemblymember Shirley Weber (D-San Diego) would protect survivors of violent crime and family members of homicide victims from being fired. Under the bill, these individuals would be allowed to take unpaid time off work in the wake of the crime without fear of losing their jobs.

The second bill, Sen. Durazo’s SB 1190, would allow victims of violent crime to break lease without penalty within the first six months of a crime occurring. Current law only allows a crime survivor to break lease within 14 days after a crime. This bill would also expand the list of crimes that qualify a person for penalty-free relocation.

In an effort to reduce racist 911 calls, Asm. Reggie Jones-Sawyer (D-Los Angeles) introduced AB 1775, a bill that, if signed by Newsom, will make it a hate crime to make a bogus 911 call based on a person’s actual or perceived race, ethnicity, gender, immigration status, disability, or other characteristic listed in the Ralph Civil Rights Act of 1976.

Another bill addressing the 911 system, which would have created space for changes to the 911 system with the goal of “reimagining policing,” failed to progress earlier in the summer. Sen. Skinner’s SB 773 would have made it possible for California’s 911 Advisory Board to recommend revisions to 911 systems at the local level that would allow dispatchers to divert non-violent calls related to mental health, homelessness, and other needs better met by social services, away from an armed police response.