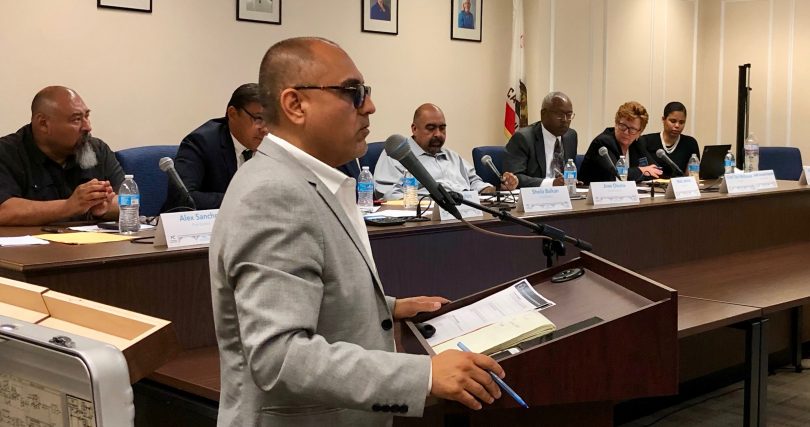 After 14 public listening sessions held all around Los Angeles County—some of the meetings drawing as many as 200 people—the temporary blue-ribbon panel, known as the Probation Reform and Implementation Team, or PRIT, delivered its plan late last week for the creation of the nation’s first civilian oversight commission for a local probation department.

Before it was made public, WitnessLA gave readers an early look at the proposed strategy, focusing on one of the most important, and most controversial elements in the new plan—namely subpoena power.

But there are other significant elements to the ambitious plan that the proposal’s authors, along with youth advocates, community members, probation staff, and others consider to be make-or-break issues.

Here are five of the key takeaways from the report.

The pressing need for civilian oversight

On Thursday, June 13, when the proposed plan for the Probation Oversight Commission (POC) was officially presented to the public, executive director, Saul Sarabia made a point of praising the help and cooperation by LA County Probation Chief, Terri McDonald, and Chief Deputy Sheila Mitchell, as did several others on the panel.

Yet, in the 28-page  proposal, the authors delivered a far more urgent message, writing of a department in “dire need of oversight.”   In the course of eleven months of public meetings, the panel found “a sharp public mistrust” of LA’s Probation Department in most quarters—including both community members and probation staff.

The PRIT panel members, and their subject matter consultants,  also found such problems as “a failure in the stewardship of public funds….dysfunctional relationships between the unions, management and the populations they are paid to serve”….and more after that.

The report’s recommendations, the proposal’s authors wrote, “reflect the PRIT’s assessment of the complexity of the oversight problems and the failures of the status quo model” to effectively guide the department successfully “into the new century.”

In other words, things cannot and should not go on as they are. Civilian oversight is necessary.

“I don’t think it can be overstated how important this is to the quality of life of these young people” who are in this system, “and for the communities of which they are a part,” Supervisor Mark Ridley-Thomas told us the day before the report was released. “So to get this right is important.”

It has already been pretty much established that the new POC’s principal reasons for being will be to “advise the Board of Supervisors and the Probation Department” and to “monitor the department’s progress on systemic reform on behalf of the board.”

But, judging by the past,  to be able to track the progress—or lack thereof—of “systemic reform,” the new POC will need to have some kind of firmly delineated authority in order to do said tracking, according to the report, and according to various subject matter experts.

As WitnessLA reported previously, the PRIT authors made it clear in their proposal that, in order to ensure that the new POC will be able to acquire the documents, data, and testimony required for effective oversight, it needs the “power to compel,” mainly subpoena power.

“The Probation Department has exhibited a longstanding and incomprehensible resistance to the adoption of practices that are working in other jurisdictions,” former Superior Court Judge Jan Levine wrote in a June 13 op-ed for the Daily Journal.

“While paying lip service to rehabilitative versus punitive models, it has nevertheless fought to preserve an opacity in its operations, thereby concealing the full extent of its resistance to incorporating better practices,” wrote Levine, who is a member of the present—and powerless—Probation Commission. “The turmoil we see now is the inevitable consequence of that course of action.”

Unless the Board of Supervisors is willing to give the new commission “certain recommended powers and authorities,” Levine said, “nothing will change.”

The other two powers that the proposal deems absolutely essential are the power to do “unfettered inspections” of probation facilities and the like. The other is the power to investigate.

“The Probation Department has the grave responsibility of the physical safety and welfare of youth and adults in its custody,” the report says of investigations, “so it is vital that the POC closely monitors the conditions of confinement and the quality of treatment and programming offered probationers.”

The existing commission is able to make unscheduled visits to the halls and camps, so the power to do inspections presents little problem.

“A hallmark of effective oversight is the authority to conduct robust, independent investigations of matters deemed material to the POC,” wrote the report’s authors.  The Supes can’t carry out investigations themselves. And periodic audits by the Auditor/Controller “lack regularity, consistency and subject matter expertise.”

So, the report suggests that the POC should have the power to do some investigations, and then they should be able to partner with the Office of the Inspector General in other situations where information pertaining to an investigation can’t be made public, thus, by definition, those investigations “are not suitable for a Brown Act body to consider.”

Yet, both kinds of investigations arguably circle back to the necessity for subpoena power.

However, whether the supervisors will agree with this assessment is an open question.

Composition of the POC

The composition of the new oversight commission, as described in the report,   will be similar to that of the Civilian Oversight Commission (COC) that is watchdogging the Los Angeles County Sheriff’s Department.

Like the COC, the POC will consist of nine members.

The first five of those members will be appointed by the board of supervisors, with one member nominated to represent each of the five supervisorial districts.

Once those initial five are appointed, they will, in turn, appoint four more members.  Yet there are limitations placed on who those four “at large” members can be.

At least one member must be a working lawyer, in particular, a member of “the criminal defense or civil rights bar.”

That leaves one more “at large” member to be selected.  According to the PRIT proposal, there are a lot of people who may not be considered for that last spot.

For instance, no one who works for a  foundation that provides money or assistance to any facet of LA County’s criminal or juvenile justice system may be chosen. Also, no employees or subcontractors of community-based organizations that provide “rehabilitative services to adults or youth” in the county can be on the list.

And there can be no working members of law enforcement, probation or otherwise on the new POC.

Yet, “those who’ve worked for probation in the past” would be ideal, said PRIT member, and juvenile defense attorney, Cyn Yamashiro—who, like Jan Levine is on the present probation commission.

(Are you listening probation unions, and retired probation officers or custody officers?  Candidates may be nominated by others or may nominate themselves.)

The composition of the new commission should reflect “subject matter expertise and lived wisdom,” wrote the proposal’s authors.

Plus, potential POC members also have to “really care” about doing this job, added several of the PRIT panelists last Thursday.

The crucial topic of staffing

Another of the problems experienced by the existing probation commission is that the body has no staff other than one part-time person who puts out agendas and the like.

The PRIT report authors would have liked 25 staff members for the new POC, but cut the number down to 20 in the final proposal, out of concern that the board of supervisors would balk at the cost of even that number, however well justified.

“See, LA is a country,” said Sandra McBrayer, who has been consulting with the PRIT since its inception.

The necessity of including rigorous community involvement as part of the reform process is something that was emphasized over and over in each of the public meetings the PRIT held.

“Transformation and meaningful oversight must reflect the expertise of the communities who have suffered most and longest under a failing Department,” wrote the ACLU’s Ian Kysel, in a joint letter to the board of supervisors, which was signed by thirty local activist organizations, including the ACLU of Southern California, Homeboy Industries, the Youth Justice Coalition, Arts for Incarcerated Youth, the Children’s Defense Fund and 25 more.

Supervisor Ridley-Thomas, while he would not commit to a concrete number of staff, was firm that proper staffing was an essential element.

“If an oversight commission has no staff how can it do its work?” he said.

The need for an independent grievance system has been a contentious issue for several years now.  The report’s authors believed that the new POC and its staff can and should fill that role for both kids and adults who are under probation’s supervision.

The existing probation commission saw the matter as especially urgent after former LA County probation officer, Oscar David Calderon Jr. was charged and sentenced for making sexual overtures to some of the teenage girls at Camp Scudder,  assaulting two of them—one of them horrifically.

In a lawsuit brought by one of the girls, her attorneys described how she and her godfather had tried to report the ongoing overtures and eventual assaults to various staff members with no result at all.

Subsequent investigations by WLA and by the commission found that many kids felt they could not safely report serious abuse in county lock-ups.

“What we heard in the public meetings was that it wasn’t just the community who wanted a place to bring grievances, ” she said.  “Staff wanted a place. They wanted to be able to say, ‘nobody seems to be able to hear me, but maybe you can.’ That’s equally important,” said McBrayer.

“The POC needs to build trust within the community, but also within the department.”

So when will we know what the members of Los Angeles County Board of Supervisors think of the proposal?

“Oh, within the next 30 days at the outside,” said Ridley-Thomas.