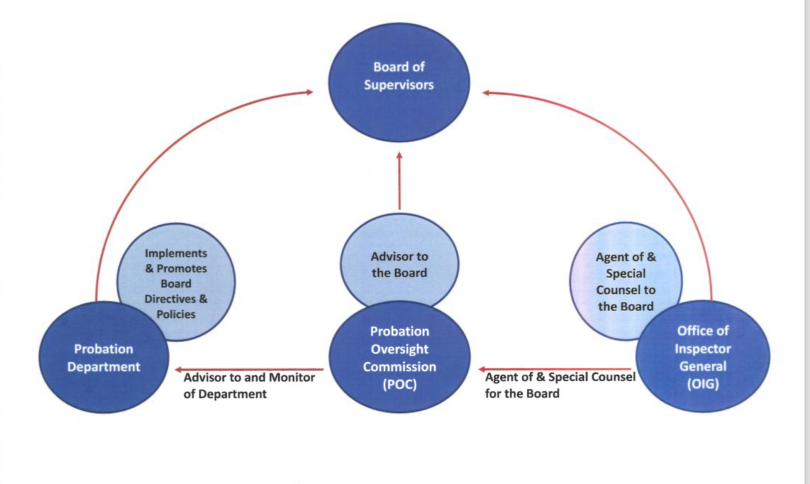 Will Los Angeles County soon get a new oversight commission to monitor the LA County Probation Department in much the same way that the LA County Sheriff’s Department’s Civilian Oversight Commission now keeps an eye on the LASD?

There has long been talk of some form of oversight for the nation’s largest probation department. But a big step in the direction of such an oversight body occurred on Monday, April 9, when LA County Chief Executive Officer Sachi Hamai delivered a report to LA’s Board of Supervisors outlining a plan to establish an independent commission to “monitor the Probation Department’s reform efforts” and to “drive better outcomes” for the youth and adults who are under the county’s supervision.

If the board chooses to accept the plan outlined in the report, the new oversight commission would indeed be very similar in nature and function to the Civilian Oversight Commission that was voted into being by the Supes in January 2016 to keep tabs on the LA County Sheriff’s Department. In fact, according to the new report, the proposed Probation oversight body would directly mirror the “design, structure, and staffing” of the LASD’s oversight commission.

Interestingly, the report strongly recommends that the commission have the ability to conduct investigations, whenever necessary. But we’ll get back to that part of the plan in a minute.

It is also important to point out here that LA’s Probation Department already has a commission. But the present Probation Commission, created in 1903 to advise the then Chief Probation Officer, is hampered by the fact that it has no real power. It can make recommendations to department higher-ups, but that’s about it. It also primarily focuses on the juvenile side of probation, not the side dealing with adults. And it certainly has no real investigative powers.

Monday’s report takes all that into consideration.

The report was researched and written in response to several motions passed by the Supes, the most recent being a motion passed on October 17, 2017, proposed by Supervisors Mark Ridley-Thomas and Janice Hahn, with an amendment by Supervisor Sheila Kuehl. The motion directed the CEO to “engage community-based stakeholders” and others in order to develop recommendations for the creation of an independent entity.

The result is Monday’s 11-page document.

But, rather than starting from scratch in creating this “independent entity”, the report—which you can read for yourself here—proposes that it would be advantageous for a newly created probation oversight commission (POC) to use the existing commission’s structure, as a foundation, from which it can build and expand.

One of the primary jobs of the proposed new commission will be to “monitor” and “support” the reform of the probation department.

The department, notes the report, has been asked to implement—and in some cases, continue to implement— “multiple large-scale, and complex changes.”

A main function of the proposed POC would be to make keep an eye on reform efforts in order to make sure that they don’t stall, and also to ensure that relevant reforms are “institutionalized” throughout the department, not just created in model form, but not expanded department-wide.

To help accomplish these goals, the new commission would periodically produce oral and written reports “detailing the status of departmental reform efforts.”

Right now, the existing probation commission only reports to the leadership of the probation department, however, the POC would also report to the Supes, who would be the commissioners’ ultimate bosses, which by definition would give the POC more heft.

Probation has greatly improved since the bad old days of ten plus years ago when certain groups of probation officers were videotaping gladiator fights they’d instigated between kids in the juvenile camps, and the department, no kidding, “misplaced” somewhere between 1500 and 2000 of its employees, and could not figure out what it had done with $79 million that it was supposed to have spent improving the condition of its juvenile camps to avoid a looming federal lawsuit.

Yet, there have been times in the past when it appeared that the department had made significant progress, discouraging backsliding often seemed to occur. For instance, in February 2015, when the Department of Justice signed off after nearly nine years of federal oversight of probation’s juvenile camps, less than two months later, the LA County Auditor-Controller’s office put out their own report about the matter of probation’s DOJ compliance, and found that the department wasn’t in compliance with the DOJ’s requirements at all.

Under Probation Chief Terri McDonald, who took over the reins of the department in January 2017, Probation has made important strides, including the opening of the much-praised Campus Kilpatrick in the summer of that same year. But large agencies are notoriously difficult to transform, so to help differentiate real progress in the department from the illusion of progress, Monday’s report strongly suggests the creation of a “tool” to assess the department’s efforts at reform.

This tool would contain such elements as timelines, desired outcomes, metrics, and key performance indicators—all components that, according to the report, would also serve as a guide to define the work of the POC itself.

Creating a new civilian oversight body that has the knowledge and experience necessary to advise both probation’s command staff and the supervisors on departmental reform is one thing. But should that same group to also do its own investigations when they become necessary?

The report answered that question by suggesting that LA County’s Office of the Inspector General act as the “vehicle” to do investigations as needed by the new POC.

Yet the report is clear about its contention that the oversight commission “must also have the ability to conduct thorough investigations” in some fashion—via the OIG or by other means.

Failure to provide this access, it states, “would stunt the desired effectiveness of the newly established POC.”

Similarly, the report emphasizes that the POC must have access to information “related to, impacting, and resulting from, the policies, processes, conditions and activities” for which it will have oversight.

The last two critical responsibilities of the new commission, according to the report, is engage in plenty of community interaction, and to “enhance transparency” of the Probation Department.

To do so, the POC would, among other activities and duties, host periodic community forums or town halls to address issues, concerns, and incidents that are of interest and importance to residents and “stakeholder organizations.”

The POC would also operate as Brown Act body, meaning all its meetings would be open to the public.

Finally, the CEO’s report recommends that a temporary entity called the Reform and Implementation Team, be created to do all that is necessary to convert today’s Probation Commission into the larger and more powerful Probation Oversight Commission.

But for this to occur, the board of supervisors must pass a motion accepting the report, and expressing the desire for the Reform and Implementation Team to be created, which would then start the ball rolling—with some steps along the way subject to approval by the board.

“Well, there has been a series of motions over the last three years calling for reform and accountability of the Los Angeles County Probation Department,” Supervisor Ridley-Thomas told us when we asked about the new commission’s chances. “These motions have been authored or co-authored by the majority of the board members, with varying degrees of emphasis. And this report is the culmination of those efforts.

“It’s been a long haul,” he said. “But, we’re finally getting close to where we need to be.”