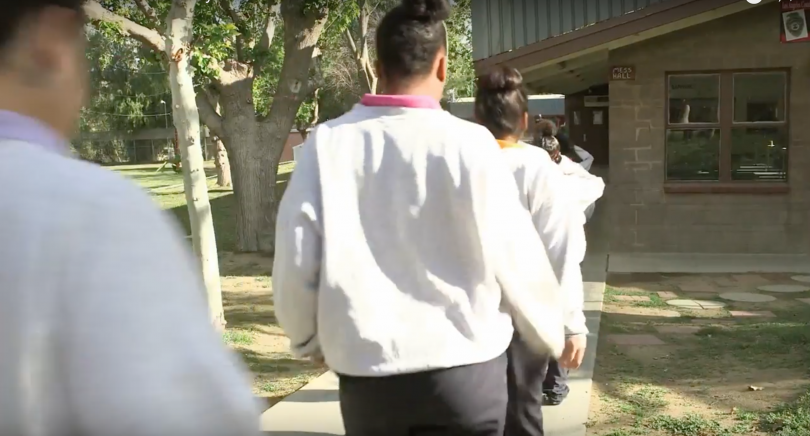 Former Los Angeles County probation officer, Oscar David Calderon Jr., 33, was sentenced Wednesday to one year in jail after pleading guilty to two felony counts of assault under the color of authority, for “inappropriately touching” two girls at one of the county’s juvenile probation camps, according to the Los Angeles County District Attorney’s Office. Calderon will not be required to register as a sex offender.

In a statement, the DA’s office said that Calderon—who worked as a deputy probation officer for approximately nine years, and worked at Camp Scudder, an all-girls juvenile facility located in Santa Clarita, since 2014—made sexual overtures to some of the teenage girls at the camp, and assaulted two of them.

When Calderon was originally arrested in January of this year, he was charged with inappropriately touching, not two, but four teens inside Camp Scudder. According to the LA Times, prosecutors said that the probationer victims ranged in age from 15 to 18-years-old.

Moreover, a civil lawsuit filed in federal court on July 14, 2017, by one of the female victims alleges that a supervisor, and a therapist, knew about Calderon’s behavior, and did nothing to intervene, while multiple other co-workers allegedly observed at least some of the officer’s inappropriate actions, which should have been perceived as red flags.

According to an amended complaint filed on September 6, 2017, by the victim’s attorneys, Erin Darling and Justin E. Sterling, during the time their client was in Camp Scudder she was under the direct supervision of then-Officer Calderon, who allegedly used his power to threaten her into compliance.

“On at least two occasions,” the attorney’s wrote, “Officer Calderon told Plaintiff that if she refused to obey him, ‘I will fuck up your court reports.'”

Calderon was reportedly also in charge of where the victim worked in the camp, what personal items could be sent to her by her family, and how many phone calls she could make to family members.

The complaint describes an escalating pattern of inappropriate attention from Calderon toward the victim, Calderon is described as being approximately 6’1″ in height, compared to the probationer victim, who is reportedly 5’2″. At first, the complaint states, Calderon was “flirtatious,” bringing the victim food, that she hadn’t requested.

The attention, which reportedly embarrassed and worried her, graduated to odder forms of behavior, such as rousting the victim out of her bed after lights out to sit with him in the darkened cafeteria. Soon the incidents allegedly escalated to incidents of inappropriate touching, kissing, and in one alleged incident, choking.

Finally, from April 2015 through June 2015, according to the harrowing narrative laid out in the complaint, Officer Calderon sexually assaulted the victim, who was by then, 18, once a week, “on approximately ten occasions.” The alleged acts described included sexual fondling, groping, and digital penetration, among other assaultive actions, which occurred during her weekly work shift at the camp’s snack shop, where the officer could reportedly grab her out of sight of others.

The snack shop was reportedly located in “a remote part of Camp Scudder, behind
the athletic track and away from any other structure.” According to the victim, during her shift, the snack shop was not visited by other officers to whom “she could cry for help,” but only by probationers who came to acquire snacks, which she would distribute standing at a window, while Officer Calderon sat, unseen, behind her.

Officer Calderon reportedly sat with the victim when she called home, so she did not feel she could confide her situation to her family. According to the complaint, when matters began to escalate, she did, however, write her godfather, who then reportedly contacted Calderon’s direct superior, a female supervising deputy probation officer, and told her of his concerns for his goddaughter’s safety in person. The supervisor reportedly said she could take his complaint but that she trusted Calderon “100 percent.”

Reportedly, nothing changed after the godfather lodged the complaint anyway.

Not knowing what else to do, the victim reportedly told her therapist. Again, according to the complaint, nothing changed. No one came to interview the victim. Instead, Calderon’s actions got worse.

The complaint alleges that she was further discouraged from filing a complaint by the general remarks from certain staff members to her, and to other probationers, about “snitching.”

“Don’t be a snitch,” they allegedly said, “snitches get stitches,” and “you don’t want a snitch jacket on you.” So, she didn’t “snitch.”

Later, after the alleged sexual assaults had begun, Calderon’s supervising officer, the one that he godfather had contacted, reportedly remarked to the victim, “you’re brainwashing Calderon.”

The victim took this to mean that the supervisor “was aware of it, blamed Plaintiff for the  unwanted attention, but did nothing to prevent Officer Calderon’s abuse.”

The victim’s sense of isolation was reportedly made worse by the fact that Officer Calderon was “still responsible for Plaintiff’s court reports and Plaintiff did not want a negative review of her to extend her time at Camp Scudder.”

The victim/plaintiff was released from Camp Scudder on July 17, 2015.

In WitnessLA’s award-winning investigative series “Beating Children,” we reported on three alleged incidents of probation staff physically assaulting teenage probationers, all males. In one April 2016 incident, that was caught on video, four probation staff members appear to punch and kick an unresisting 17-year-old boy while a supervisor looks on. In March 2017, three of the officers allegedly involved were criminally charged.