After ten months of public meetings, which were often intensely emotional, the special panel created to come up with a plan for a new Probation Oversight Commission is about to release its report to the board of supervisors on Thursday morning at 10 a.m.

Since early August 2018, the Probation Reform and Implementation Team—or PRIT—as the temporary nine-member panel appointed by the board is known—has been working to create a detailed plan for the formation of the Probation Oversight Commission—or POC—a new county body that will act as a watchdog and advisor for the nation’s largest local probation agency. 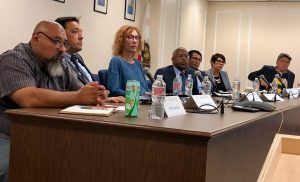 The PRIT, if you remember,  was formed after the board unanimously passed a motion by Supervisors Mark Ridley-Thomas and Hilda Solis  in May 2018, ordering the development of a “path for instituting a Probation Oversight Commission.”

Now that the report is about to be released,  there is much anticipation about what the PRIT will advise about the make-up of the commission, its duties, and its powers.

We’ll have much more on the innovative proposal later this week.

But, in the meantime, WitnessLA has obtained an early draft of the report.  So,  while we wait for the final, final draft, we thought you’d like a window into what is arguably the most important section of the proposal—and also likely the document’s most controversial section.

The section is titled: Power to Compel.  And it explains why the new POC must have subpoena power.

The summary of the proposal’s argument as to why a new county body needs subpoena power is, very briefly, as follows:

“In order to effectively meet the mandates articulated in the Board Motion [to create the POC] and effectuate the authorities and duties outlined….the POC must have: 1) broad access to discover an expansive scope of documents, data, real evidence and direct testimony-subject to any existing laws; and 2) subpoena power as the only swift, fair and reliable mechanism to ensure the department complies with information requests in a timely and good faith manner.”

But will the new POC get that power? 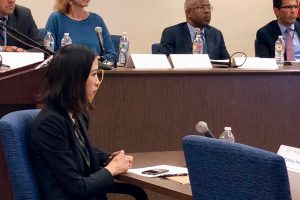 When the topic first came up in the various public meetings that the PRIT has been hosting this year,  members of the existing LA County Probation Commission, which the POC will replace,  pointed out that they often have trouble getting any kind of serious data and/or documents out of the department they are  supposed to be overseeing and advising, even when the information requested was something any journalist can acquire, at least in theory, through a California Public Records Act request.

Overall, the probation commission the county has now, created in 1903 to advise the then Chief Probation Officer, is significantly hampered by the fact that it has no real power. It can make recommendations to the probation chief, but that’s about it.

When the motion to create the POC was passed last spring,  it was specified that the new entity would report straight to the board of supervisors and would be somewhat modeled on the Civilian Oversight Commission or (COC), the body that is presently engaged in attempting to oversee the LA County Sheriff’s Department.

The COC, however, does not have subpoena power. In fact, during the formation of the COC, in 2015, the biggest disagreements those working on its formation had with the LA County Board of Supervisors was whether the COC needed the illusive subpoena power.  The board of supes ultimately said no, although justice advocates and community groups argued long and strenuously that the COC needed it. 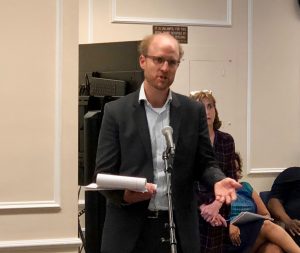 In recent months, if anything, those voices have grown louder.

Now, as it turns out, the COC may get subpoena power after all courtesy of a local initiative that will be on the 2020 ballot.

So what about the POC?

Off the table or not?

When the topic of such legal powers first came up at the PRIT public meetings, it appeared that the S-word—subpoena—was pretty much off the table for the new commission.

But then at an October 2018 public meeting where the matter was discussed more extensively, the idea that subpoena power for the POC was impossible did an unexpected 180.

At the beginning of that meeting, a representative of the Los Angeles County Counsel’s explained what had long been the prevailing opinion on the matter, which was that certain provisions of the California Welfare and Institution’s Code (WIC) would not endow any local Probation Oversight Commission with the ability to compel the attendance of witnesses or the production of documents or evidence.  Period.  End of story. (There was more to it, but that was the bottom line.)

If the POC ever needed something investigated, it was suggested, the County’s Office of the Inspector General could do the investigating—nevermind that the OIG didn’t have subpoena power either.

But, then later in the October meeting, two other attorneys presented a very different historical and statutory analysis of what California state law said on the topic.

The two attorneys were Patricia Soung, the director of youth justice at the Children’s Defense Fund, where she is also the staff attorney, and Ian Kysel, an ACLU staff attorney, whose work focuses on criminal justice, juvenile justice, and police practices.

“In our analysis,” said Soung, who did the actual presenting, “the governing law dictates that the oversight commission should have robust, expansive powers,”—including powers like “investigative power and subpoena power.”  And then she explained why—in extensive detail.

Two months later, in December 2018, the ACLU, Children’s Defense Fund, Public Counsel, and a list of other organizations,  put out an expanded version of the argument Soung had presented at the October PRIT meeting, which in essence stated that the POC didn’t need to ask for subpoena and related powers.  When the new commission came into being, it would already have those powers, statutorily speaking.

Okay, so does the POC really need such powers?

“Yes,” said Soung, unequivocally, when we asked her about the issue a couple of days ago. “Subpoena power is about reform implementation. And implementation of reform needs strong, robust oversight.”

Overseeing the implementation of a specific roadmap for reform will be one of the POC’s main reasons for being, according to the new report, and also according to the original motion by Ridley-Thomas and Solis that the board approved.

“It will take time to move toward a strong youth development, youth services model. And we need reform on the adult side too,” Soung said. And subpoena power, she said, is necessary to effect “these transitions.”

Leap has been a subject matter advisor for the PRIT, and she was one of the main researcher/authors for the 500-page  L.A. County Probation Governance Study delivered to the supervisors in February 2018, by the by Oakland-based consultant group, Resource Development Associates (RDA).

The RDA report laid out seven “key” recommendations for the probation department that the PRIT was supposed to fashion into a roadmap for probation reform, which the new POC can, in turn, oversee once it is eventually jump-started into being by the supervisors.

(This “roadmap” is scheduled to be delivered in late June or early July.)

But according to Soung, Leap, and others we spoke with, such oversight needs to be rigorous, and it needs….teeth.

“There is a deep need for an oversight commission with real authority,” said Leap.  “We have a county department that — despite some staff who care deeply — continues to be plagued with a mosaic of problems.  We’ve learned a lot from the COC who frankly wishes they had subpoena power.”

What will the Supes do?

The big question, according to those we spoke with, both on the record and off, is whether or not the LA County Board of Supervisors will agree that the POC should have subpoena power?

“The other commissions in other counties have it,” said  Sandra McBrayer, who has been consulting with the PRIT since its inception.

“Whether they use it or not is another thing.”  But they have the power, said McBrayer, because the state statute gives it to them.

“The POC still has to go through due process,”  McBrayer added,  meaning the commission will usually have to go before a judge to use this power.  “And it doesn’t take away anybody else’s power.”  There are legal boundaries, such as the  Peace Officer’s Bill of Rights, she said.

McBrayer told us she thought there was reticence in some quarters based on the fear that that such power would be used “to bash” the probation department.  “Or the unions.”  But that’s just not true, she said.

Indeed, as the new report explains, “the POC shall have the authority to gather all necessary information in order to provide the BOS and Probation Department appropriate guidance regarding the operations, policies, and performance of the department.”

But will the Supes agree?

Editor’s note: For those wishing to better understand the legal argument for the POC having subpoena power, the December 2018 “White Paper” linked below provides a helpful rundown of the statutory underpinnings.