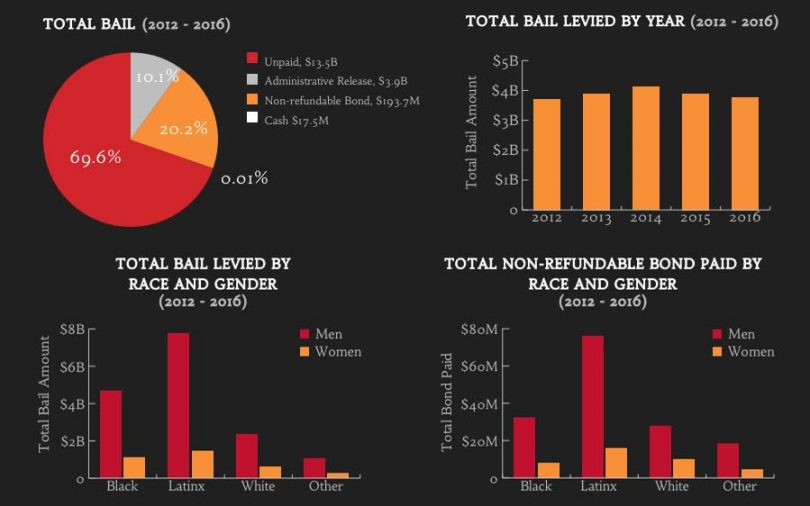 (The $19.4 billion total does not include arrests made by other LA-area law enforcement agencies or any changes that judges may have made to bail assessments.)

UCLA’s Million Dollar Hoods research team found that most people did not post bail, and thus, stayed in jail while awaiting trial.

A total of 62,118 people were bailed out of LAPD custody, paying approximately $17.6 million in bail money to the courts, and approximately $193.8 million in nonrefundable bail bond deposits to bail bondsmen during the five-year period, according to the report.

When UCLA researchers mapped out the LAPD data, they found that the highest bail amounts were levied against people City Council Districts 8 and 9, which have the highest levels of unemployment in the city.

“We included breakouts by city-council district so elected officials can see how much their constituents are paying to a private industry that doesn’t generate outcomes, said Professor Kelly Lytle Hernandez, Interim Director of UCLA’s Ralph J. Bunche Center for African American Studies. “Other states have found that non-monetary ways of securing return to court have functioned just as well, if not better than money bail.”

Homeless people were hit with just under $4 billion in bail total.

One young man, Dayvon Williams, says he spent seven months in jail because he couldn’t afford to make bail. “I have epilepsy and the guards wouldn’t give me the proper dosage of my medication,” Williams said. “I had multiple seizures, and was put in solitary confinement for two weeks. Because I didn’t have any money to pay a bail bond company, my health suffered and I missed my graduation.”

The UCLA report found that $13.5 billion of the $19.4 billion in bail money set was never paid. This left 223,366 people behind bars in the custody of the LAPD during the five-year period.

“This is an astounding toll that Los Angeles residents – not yet convicted of any crime – are charged for their freedom,” said Lytle Hernandez. “It’s no wonder that so many Californians remain imprisoned before trial simply because they cannot afford bail. This is an extraordinary amount of wealth taken primarily from low-income, communities of color.”

The report also points to a 2016 report by the Ella Baker Center for Human Rights that reveals that the average family with a locked up loved one racks up $13,607 in debt related to their family member’s incarceration.

The high cost of incarceration on families affects women, in particular. Of those family members specifically responsible for the cost of court fees and fines, a whopping 83% were women, according to the Ella Baker Center report. A fifth of respondents reported having to take out a loan to cover these costs.

The UCLA report is the first in a series that will focus on bail issues, as the state of California, and local jurisdictions, including Los Angeles County, move toward reforming their cash bail systems.