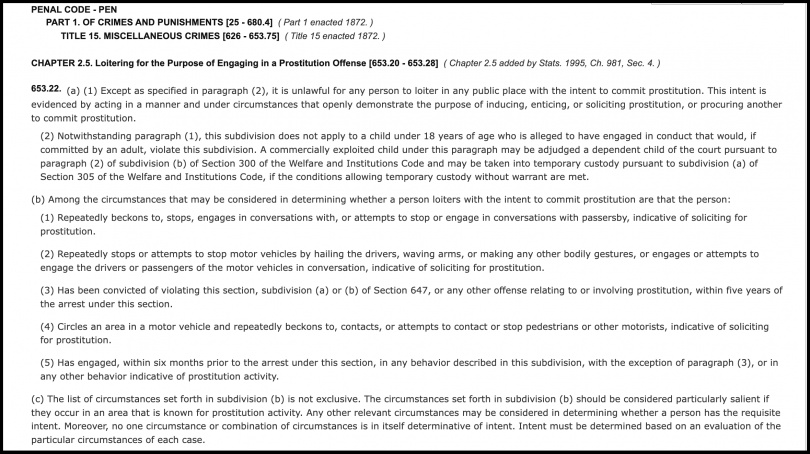 Under a newly signed bill, police in California will no longer be able to enforce a section of the penal code that leads to the disproportionate arrests of Black and trans residents when officers deem them to be loitering “with the intent to commit prostitution.”

“This offense permits law enforcement to stop and arrest people for discriminatory reasons, such as wearing revealing clothing while walking in an area where sex work has occurred before,” Sen. Wiener said. The penal code section, “results in the legal harassment of LGTBQ+, Black, and Brown communities for simply existing and looking like a ‘sex worker’ to law enforcement.”

Black individuals make up just 8.9 percent of the population in the City of LA, yet accounted for 56.1% of such loitering charges in the city between 2017-2019.

A 2019 LA Public Defender’s Office analysis showed Black adults made up 72.3 percent of people charged under § 653.22, who received representation through the Compton branch of the public defender’s office. Black people represent 30.9 percent of the city’s population. Cisgender and transgender women made up 100 percent of those charged under the penal code section, according to the report.

In addition to preventing future arrests and charges of this kind, SB 357, also called The Safer Streets for All Act, allows people who have previously been convicted of this loitering offense to submit a petition for resentencing or dismissal, and to have their records sealed.

CA Governor Gavin Newsom signed SB 357 on July 1. The bill, does not legalize sex work, Newsom wrote in his signing letter. “It simply revokes provisions of the law that have led to disproportionate harassment of women and transgender adults.”

“We supported this law being repealed because the language used was overbroad, subjective and allowed law enforcement to stop and arrest people for discriminatory reasons,” Gascón wrote in a statement.

Changing the penal code, according to the ACLU, one of the organizations that helped develop the bill, will also “undo harmful barriers to employment and access to safe housing for women of color and transgender women.”

More than 60 organizations officially backed the bill, including the Coalition to Abolish Slavery and Trafficking, the Los Angeles LGBT Center, the California Public Defenders Association, Californians for Safety and Justice, and the City of West Hollywood.

In a statement opposing the bill, the LA County Sheriff’s Department said patrol officers use the law “to keep prostitutes from hanging around public places, businesses, and residential communities.” The bill, the department said will also make it harder for law enforcement to go after sex buyers and traffickers.

The governor, in his signing letter, said that he agreed with the intent of the bill, but added that his administration “will monitor crime and prosecution trends for any possible unintended consequences and will act to mitigate any such impacts.”

The bill builds on Sen. Scott Wiener’s earlier decriminalization-focused work, including SB 233, a 2019 bill meant to ensure that sex workers who are victimized or who witness violent crimes are not funneled into the criminal justice system themselves when they come forward to report those crimes to the police.