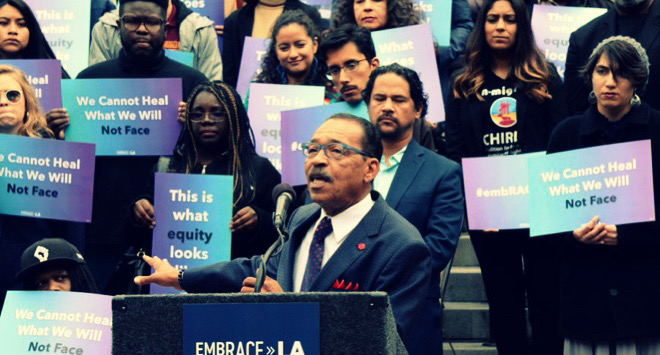 On Tuesday, the Los Angeles City Council voted unanimously to create a brand-new Office of Racial Equity (ORE) to break down racial disparities in the city policies and programs affecting issues like housing, health, education, employment, and the justice system.

The move follows on the heels of San Francisco, where officials have been working over the last six months to develop their own Office of Racial Equity.

Over the last several months, Wesson, O’Farrell, and Harris-Dawson partnered with Community Coalition, Advancement Project, and Revolve Impact, on a mission — called embRACE LA — to hold more than 150 conversations about race and inequality across the city. These conversations helped to inform the development of the ORE.

People attending these conversations answered survey questions about race and justice in LA. Survey respondents, for example, overwhelmingly supported the ORE, and a mere 21.5 percent reported that they agreed or strongly agreed that the city was an equitable and inclusive place for people of all races and ethnicities to live.

“When this government was created it was not created to benefit people who looked like me,” said Council President Wesson. “I am proud that in one of my final acts as the first Black Council President, we as a Council acknowledge the City’s role of structural and institutional racism and its role in righting those wrongs with an Office of Racial Equity that looks out for all Angelenos.”

The motion points out several examples of racial disparities that persist in Los Angeles — disparities that the ORE could work to disassemble. Black residents, for example, have the lowest median household income in LA. And mortgage lenders most frequently deny applications from Native Americans (27.3 percent). The motion also notes that a startling 41 percent of black transgender people in LA report having experienced homelessness at some point in their lives. And Asian Pacific Islanders who rent their homes, have the least amount of income ($601) left over every month after housing costs.

“The racial inequities that exist in Los Angeles are not accidental – they are the result of various historic, systemic, and socioeconomic factors, including biased and discriminatory government decisions, policies, and practices,” the motion says. “Throughout its history, many of L.A.’s decisions have excluded certain communities and populations and resulted in an inequitable distribution of opportunity, housing, and even justice.”

And because our local government had a hand in “creating and maintaining” those racially biased systems, now, it must “play a role in eliminating” those inequalities, according to the councilmembers.

The motion calls on the city’s Chief Legislative Analyst and the City Administrative Officer to report back to the council with a plan for establishing the ORE.

The motion directs the CLA and CAO to consult with those community groups involved with embRACE LA, and to examine similar offices in other jurisdictions.

The ORE will be tasked with using a Racial Equity Impact Tool and an Equitable Budgeting Tool to analyze the city’s current and future policies and programs. The office will also be required to identify and track key indicators of racial equity, and to put the resulting data in a dashboard and an annual report.

In cases where policies and programs are found to be exacerbating inequality, the new office will work to repair the harm done to communities and individuals of color, and also partner with city departments to fix those disparity-producing systems.

One of the goals of the ORE will also be to boost civic engagement among populations that are less likely to participate, by making civic participation more accessible. The ORE will “coordinate and facilitate trainings for residents in their communities to build their civic capacity, civic knowledge, and sense of political empowerment,” the motion says.

Additionally, the office will offer racial equity training to city staff members focused on issues like “the history of inequality and discrimination, systemic racism, implicit bias, the role of local government in racial equity and the current state of racial equity in Los Angeles.”

In order to ensure that the ORE is benefiting the communities that need it most, a Community Racial Equity Advisory Committee will advise the office and act as a community oversight body.

The city will achieve racial equity, says to Community Coalition, “when communities of color are prioritized with investment to right the injustices of decades of disinvestment – direct results of systemic racism and white supremacy.”