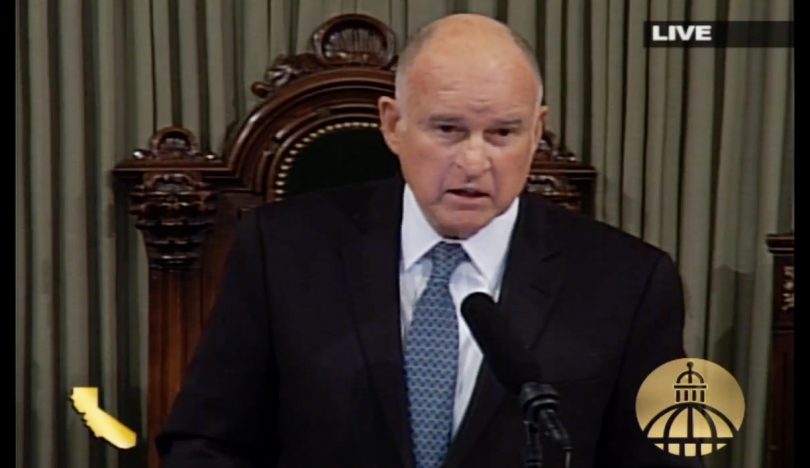 Shortly after 10 a.m. on Thursday morning Jerry Brown gave his sixteenth and last state of the state address. During the 30 or so minutes he spoke, Brown detailed what he considers some of the victories of his fourth and last term as the governor of California, and what he still hopes to accomplish in this final year as the state’s chief executive.

Brown covered topics such as the state’s economy, his two favorite but controversial infrastructure projects, and a list of environmental issues, prominently including climate change, all of which was expected. He also talked a lot about education, including a proposal for a new California online university.

Then, near the end of his speech, Brown spent a surprising amount of time on the topic of public safety, particularly as it related to the state’s criminal justice system.

As you’ll see from the excerpt from his speech below, Jerry took a swipe at the contention that bringing down the state’s disastrously ballooning prison population after being ordered to do so by the U.S. Supreme Court has done harm to public safety.

At the same time, he pointed a finger at the California’s ungainly and hugely complex penal code.

Mostly Brown seemed to urge law makers and writers of ballot propositions to take a broad, well-informed look at what has been shown to work in justice systems—both in California, and in other states and nations—and what approaches have been demonstrated not to work, before anyone attempts to make any sudden changes in response to the latest political winds, or the latest horrific crime.

Brown pushed for more in the way of rehabilitative approaches, and touched briefly on sentencing reform, in his own, vaguely Jesuitical way.

The governor also made a point of urging support for correctional officers and others who work in the state’s prisons.

Below you’ll find the text of what he said, plus a properly queued-up video clip, so you can see for yourself.

Brown’s thoughts about safety and justice

“…..Finally, I want to say something about public safety.

“Nothing is more fundamental than an abiding sense on the part of people that they can enjoy their lives, safe and secure, free from crime. Good neighborhoods, good schools and good jobs all contribute to healthy and safe communities. But still there is crime. Lots of it and, in many cases, quite serious.

“To combat crime, among other things, California has created an extensive prison system that has changed quite substantially and grown over the decades. In fact, it grew so fast and became so crowded that the United States Supreme Court issued an unprecedented order requiring drastic changes.

“To give you a sense of the magnitude of the problem, here are some of the facts:

“The corrections budget then was about 3 percent of the General Fund. Now it’s 8.9 percent — about $12 billion.

“Yet, last year, the number of reported felonies was actually lower than it was in 1970.

“In California, there are more than 5,000 separate criminal provisions specifying what is criminal, what the penalties should be, what enhancements should be added, and what credits might be earned.

“Much of this has changed—I’d say it’s changed over and over again—and churned over the decades as the legislature has enacted endless new crime laws and the voters have approved one ballot measure after another, usually but not always, adding ever more time in prison.

“My plea is relatively straightforward: take time to understand how our system of crime and punishment has evolved, how other states and countries have devised their prison systems, and what changes might we now make. I urge that instead of enacting new laws because of horrible crimes and lurid headlines, you consider the overall system and what it might need, and what truly protects public safety.

“Certainly, we need more mental health and drug treatment programs, and better training and education. Those we are getting, but more is needed, particularly hope.

(“Hope as you know is one of the theological virtues, along with faith and charity.)

“When a human being gets a 20-or 40-year sentence, as tens of thousands do, incentives to reform weaken, and hopelessness and violence take over, making prison gang influence all the more powerful. That is why recent measures are so vital which allow the possibility—and only the possibility—of earlier parole and milestone credits for those who turn their lives around.

“Equally important are the correctional officers who walk the halls and put their lives on the line in direct contact with all manner of inmate. Their job is to keep the place safe, never an easy task, and to create an atmosphere of respect and order — and foster a spirit of rehabilitation whenever possible.

“There are thousands of others who work in the prisons who also deserve our support.

“It is all out of sight, but profoundly important because most inmates will be returning to their communities. Most of ’em will. And we want them to be as reformed and rehabilitated as possible.

“For the rest, there is much we can do together before this year ends….

“And these are truly exciting times. Full of possibly, and also full of danger….”