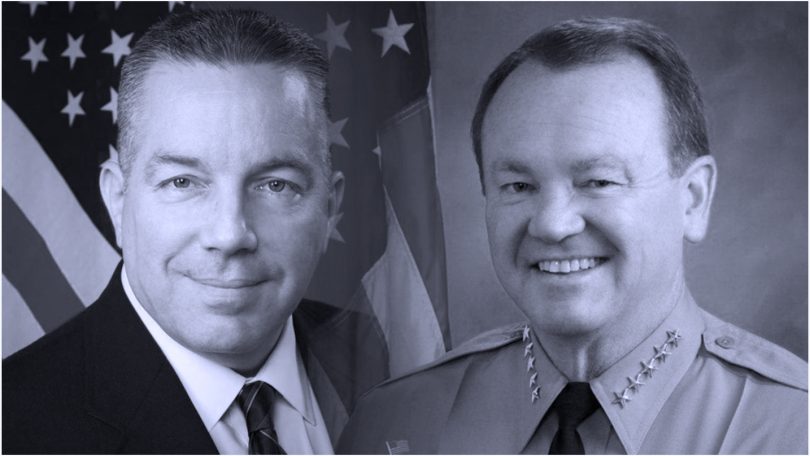 The numbers in the race for Los Angeles County Sheriff continue to be head spinning.

As most of you know, as of around 5:30 p.m. on Tuesday of this week, dark horse challenger Alex Villanueva, who is hoping to lead the nation’s largest sheriff’s department, has acquired a 22,192 vote lead over incumbent Sheriff Jim McDonnell.

UPDATE:  As of Friday afternoon, that total has raised to a 57,810 for Villanueva over McDonnell.

Yet, Villanueva’s now significant advantage has not been gained in a steady rise.

After the polls closed last Tuesday, by Tuesday night, McDonnell was in the lead. But then on Wednesday morning, when all precincts had finally reported, 4,927 votes separated the two candidates, with challenger Villanueva having surged ahead.

There were, however, still votes left to count—more than 985,000 of them. In LA County, which has a pleasantly transparent system, the registrar/recorder reports the new totals on certain designated days as the counting proceeds.

The first such reporting day was this past Friday, at the end of which, the new totals still had Villanueva ahead, but his lead had shrunk to 335 votes. In other words, McDonnell appeared to be gaining quickly on the dark horse.

And then came Tuesday, November 13’s count, which revealed that, not only had McDonnell’s gain vanished, Villanueva’s lead had ballooned to more than 22 thousand votes, a margin that in some races might designate a victory.

But there are still more than 688,000 votes still to be counted.

The next reporting day is Friday, November 16.

One indication that Villanueva may keep his advantage is the exit poll conducted by Loyola Marymount University on voting day. In a project called Los Angeles Votes, LMU conducts a series of exit polls and polling place studies using “a breakthrough sampling methodology, the racially stratified homogenous precinct approach.”

The university began the project in an effort to address the exit poll controversies of the 2000 presidential election, which resulted in various national TV networks calling the presidential race results in Florida wrong—not once, but twice—before arriving at the correct “too close to call” pronouncement.

All this brings us to the LMU project’s exit poll results for last Tuesday’s LA County Sheriff’s race, and its slo-mo final vote count.

According to LMU’s voting day polls, Villanueva is likely to keep his advantage.

Specifically, when Voters who were asked, “In the Sheriff election, for whom did you vote today?” 45.2 percent said, Jim McDonnell, while 54.8 percent said, Alex Villanueva.

So what conclusions should we draw?

We know that if Villanueva pulls off this upset, it will be the first time a challenger has bested an incumbent sheriff for the job in Los Angeles County in more than 100 years.

Yet we also know that Villanueva benefited both from his outreach to Latino voters, and to democratic voter clubs, given the unusually strong GOTV push among democrats having more to do with races affecting the national political scene, than any of the local contests.

The next round of counting, she said, could easily hit a large “pocket of votes” that favors McDonnell.

On the other hand, Levenson noted, Sheriff McDonnell “made a mistake” in not campaigning more, particularly when it came to his choice not to show up for all but one of the scheduled debates with his challenger.

“I don’t think you can do that in this day and age,” she said. “People want to be heard, and they want to hear the candidates’ response to their questions.”

Whoever told the sheriff he could skip those debates, Levenson said, “gave him bad advice.”

So stay tuned. We will know more on Friday.