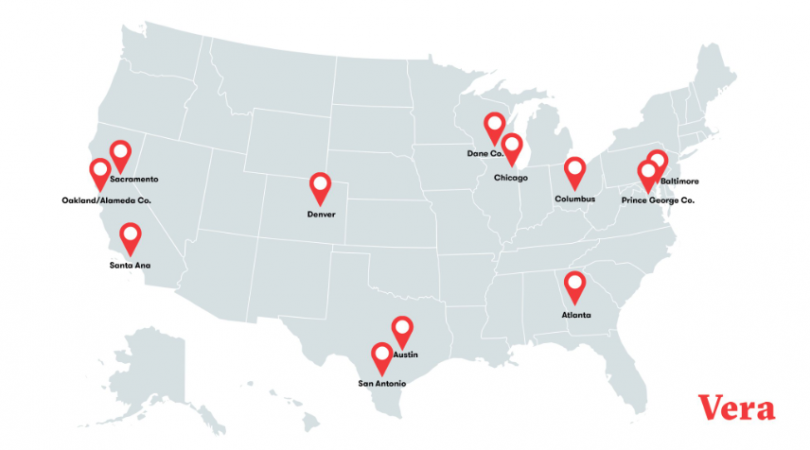 SAFE at One Year

Attorneys provided more than 400 immigrants facing deportation with legal representation during the first year of the Safety and Fairness for Everyone (SAFE) Network, a partnership between the Vera Institute of Justice and 12 cities and counties across the nation. Attorneys had won an impressive 38 percent of all completed immigration cases as of September 2018–a huge step above the national case win rate of 3 percent for individuals without legal aid.

The SAFE Network grants assistance to individuals in immigration detention, as well as those who are not locked up, but need help with their asylum petitions, their DACA renewals, or with citizenship. So far, as of September, 428 clients who have received legal support through the partnership.

“Partnering with Vera has allowed us to help many Santa Ana families, including parents, children, seniors and victims of domestic violence, says Santa Ana City Councilmember Vicente Sarmiento. “As a City, our responsibility is to keep our community safe, and protect our residents from harm. Effective legal representation will ensure that the due process rights of all our neighbors is a civic priority.”

In the wake of a successful first year of operation, Vera is working to expand the program’s reach, and has called on other cities and counties to take the first step in the application process by January 17, 2019.

In California, the Long Beach City Council is currently considering entering the SAFE Network partnership with an infusion of $250,000, which Vera would use to provide two years of legal services for low-income immigrants who live or work in Long Beach, the Long Beach Post reports. The city may also be able to boost their defense fund through a grant-match from Vera of $100,000, which the organization says it will offer to up to five new jurisdictions that meet certain criteria and standards. The five jurisdictions must, for example, have an “urgent demand” for immigrant legal services because there is either a large immigrant population or a large immigrant detention center nearby.

Los Angeles City and County are already working in partnership with the non-profit California Community Foundation to provide defense attorneys to immigrants facing deportation. The contract is part of a larger $10 million Los Angeles Justice Fund partnership between the county, the city of LA, and local organizations. LA County has also opened an Office of Immigrant Affairs to serve as a “one-stop-shop” for immigrants and their families to connect to county services and access legal help for deportation cases.

A handful of other large jurisdictions, including San Francisco and New York, have set up immigrant defense programs similar to Los Angeles’s.

Teaming up With Vera

Whether or not they receive funding from Vera, cities and counties in the SAFE Network receive infrastructure support, including training for local attorneys providing legal services, and program monitoring and relevant data tracking. Vera’s database is aimed at “measuring the impact of representation on family unity, economic impact, court proceedings, and outcomes.”

Vera is also gathering data on the demographics of those receiving assistance through the SAFE Network.

The program’s 428 clients have lived in the United States for an average of 14 years. Approximately 11 percent of those receiving SAFE’s help have lived more than 30 years in the U.S.

Nearly half of all SAFE clients are members families with mixed citizenship status. SAFE attorneys are representing the parents of 349 children, 87 percent of whom are U.S. citizens. And 79 percent of the network’s clients are responsible for at least half of their family’s income.

Twenty-two percent of SAFE clients entered or lived lawfully in the U.S. at the time their legal representation began. And 39 percent of the 428 clients are people who arrived in the U.S. as children.

Most of SAFE’s clients are seeking relief from deportation on protection-based claims (like asylum).

The outcome-focused data Vera gathered during the first year of operation shows that the SAFE Network is successfully securing the release of its clients.

With the help of their attorneys, 33 percent of SAFE clients in immigration detention were released on bond or parole during the first year. And, for 73 percent of those released from custody, SAFE attorneys secured lower bond amounts or obtained bond when no bond was initially set.

At the end of the first year, the Vera and its partner jurisdictions and organizations assisted 41 percent of the 428 clients in obtaining release—either on bond, or by winning cases.

Additionally, 100 percent of those clients released on bond continued to show up in court for their hearings.

Of all the cases completed in immigration court during the first year, 38 percent of clients won the right to remain in the U.S. In comparison, just 3 percent of individuals not represented by an attorney win relief from deportation.

Through the dedicated work of local attorneys, 128 children were reunited with their parents, according to Vera.

“Year one of the SAFE Network was a demonstrated success, resulting in positive outcomes for clients and their families at a rate ten times the national average for unrepresented individuals,” says Annie Chen, Program Director for the SAFE Network at the Vera Institute of Justice. “We look forward to building on these successes and growing the SAFE Network in year two, working with local partners to advance due process for all residents, keep more families together, and maintain safe and strong communities for all.”