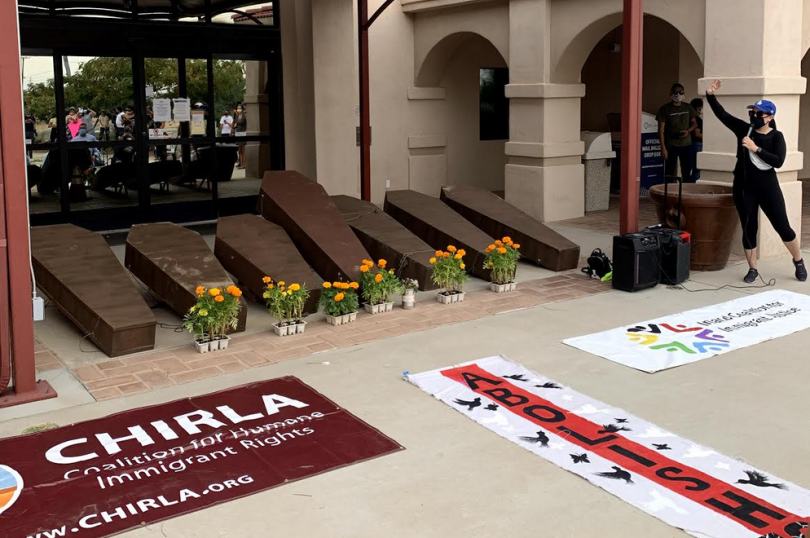 In recent weeks, the Adelanto ICE Processing Center has become the site of the largest active coronavirus outbreak among all the nation’s immigration lockups, with nearly 150 active positive cases among the incarcerated population (or about one-in-five of the approximately 770 people inside) as of the last published count on October 8.

California’s five other immigration facilities have six active cases between them, and there are a combined 734 active cases across all Immigration and Customs Enforcement (ICE) facilities.

So far, there have been no deaths at the Adelanto lockup, which is run by the notoriously bad private prison corporation, GEO Group. Nationwide, eight people have died after testing positive for COVID-19 in an ICE facility. At least 7 of those people were transferred from jails and prisons before their deaths.

In July, the Palm Springs Desert Sun reported that six out of ten positive COVID-19 cases in Adelanto were people who had transferred from state prisons, as much of the prison system was overrun by the virus — thanks to mismanaged virus control and prevention and ill-advised transfers between prisons with heavy outbreaks and those without.

At Otay Mesa Detention Center in San Diego, community groups and protesters calling for mass releases in all carceral settings “renamed” the lockup the “GAVIN NEWSOM COVID-19 DEATH CAMP.” The California Department of Corrections and Rehabilitation and the San Quentin State Prison, too, got new names: “Department of Infections and Debilitation,” and the “Gavin Newsom COVID Death Sentence Prison.” At San Quentin, more than 2,200 people have contracted the coronavirus, and 28 people have died — the most of any facility in the system, which as a whole, has had at least 89 COVID-19 deaths.

A handful of protesters sat outside the gate of Gov. Newsom’s home, with a banner urging him to “free them all.”

During the pandemic, the state has continued — and Governor Newsom has defended — the practice of working with ICE to transfer immigrants from prison directly to immigration custody just before their scheduled release from prison.

Instead of going home to their families, these individuals have been sent to privately run prisons where they face unsanitary and abusive conditions in the best of times, and even worse conditions amid the coronavirus pandemic.

Kao Saelee was one of those transferred from state to federal custody. Saelee, an incarcerated firefighter, thought his sister was picking him up from prison and taking him home, after 22 years behind bars. Instead, he was shuttled thousands of miles from home, to an ICE facility in Louisiana, just before his scheduled release. Saelee, whose family fled Laos as refugees when he was two years old, is now awaiting possible deportation to a country he doesn’t know.

Saelee has featured heavily in the calls from community members and lawmakers to stop ICE transfers.

On October 1, a group of 14 CA legislators led by Assemblymember Rob Bonta sent the governor a letter urging him to pardon the “formerly incarcerated firefighter who bravely fought on the frontlines of California’s wildfires.”

“Mr. Saelee’s incarceration has had devastating impacts on his family, and they are eager to welcome him home and make up for lost time,” the legislators’ letter states. “While incarcerated, Mr. Saelee chose to risk his life to serve California and is devoted to his rehabilitation. He has proven that he deserves a second chance.”

Back in July, Bonta and more than 40 of his colleagues in the state legislature sent a different letter to the governor stressing that ending ICE transfers would help flatten the coronavirus infection curve, and protect vulnerable people — who would otherwise be going home to shelter alone or with loved ones — from a “potential death sentence” in the “inhumane” and medically negligent conditions of immigration detention facilities.

(Newsom did sign Bonta’s AB 3228, which will widen the path for people to bring civil suits against private detention facility operators, when they fail to uphold the standards set forth in their contracts with the government.)

While the state continues to ship people to ICE, local jurisdictions including San Francisco and Los Angeles County no longer hold incarcerated immigrants on behalf of the feds.

Last month, in an op-ed for the Fresno Bee, CA Assemblymember Dr. Joaquin Arambula called on Governor Newsom to “follow the lead of Los Angeles County,” where the sheriff and county supervisors recently halted the practice. Arambula pointed to the Mesa Verde detention center in Bakersfield, where half of the detainees had tested positive for the virus following transfers from COVID-slammed state prisons, which spread the virus into the immigration facility. In the case of the GEO Group-run Mesa Verde, a federal judge was forced to order ICE and GEO Group to test detainees, after it refused to use on-hand rapid tests on the immigrants in federal custody.

Mesa Verde “neglected to administer the safety precautions and health measures needed to protect people from COVID-19,” Arambula wrote. “These individuals have been released from prison or jail because charges have been dropped. Or, they’ve completed their sentences, received clemency, or been granted parole. They should be reunited with their loved ones.”

I will not apologize for ICE’s commitment to keep American people safe. As California turns down helping their communities, ICE will stand up to help.

And ICE transferring people between its own facilities during the pandemic, in addition to inadequate social distancing, also appears to have helped the virus spread, a Department of Homeland Security report indicates.

On September 25, U.S. Senators Michael Bennet and Jeff Merkley introduced a federal bill to immediately stop transfers from jails and prisons to ICE, or between ICE facilities, during the pandemic. The bill would also require ICE to comply with CDC guidelines regarding the virus and to release more people to if otherwise unable to comply with those guidelines.

“Prior to the pandemic, there were concerns of overcrowding, limited supply of hygiene products, medical neglect, and generally poor living conditions for detained immigrants,” Bennet said. “I am deeply concerned about the increased challenges that COVID-19 places on detention facilities throughout the United States, particularly the facilities already violating detention standards prior to the pandemic.”

“This is a purely voluntary act on the part of the state of California,” CA Assm. Rob Bonta said, “to transfer Californians who have fulfilled their debt to society” to “predatory” private ICE custody. These individuals are “similar in every way” to their justice system-involved peers, “except for their immigration status.”