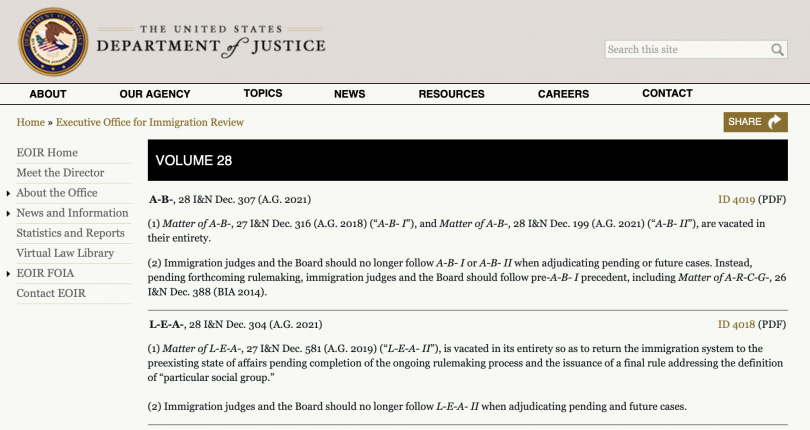 On Wednesday, June 16, Attorney General Merrick Garland took what justice advocates are calling “another critical step towards restoring access to asylum and welcoming refugees with dignity.”

In a decision that will affect tens of thousands of cases moving through the badly backlogged immigration courts, Garland vacated three Trump-era Attorney General rulings that had all but destroyed important asylum protections for people escaping domestic violence, extreme gang brutality and threats, and persecution against families.

“Advocates and asylum seekers celebrate this news, which marks enormous progress in the Biden administration’s efforts to rebuild our asylum system,” wrote Brianna Krong, Communications and Advocacy Coordinator for the Center for Gender and Refugee Studies at University of California Hastings, in an email.

Between 2018 and 2021 the Donald Trump’s Justice Department issued several restrictive rulings that made it all but impossible for many people legitimately in need of asylum to have a chance at getting it, Krong explained.

While immigration justice advocates were heartened when, during his first weeks  in office, President Biden signed several executive orders to roll back some of the worst of President Trump’s immigration policies, some of the other irrational and inhumane  Trump administration restrictions that directly affected domestic violence survivors, and others facing similarly serious threats, remained in place.

There was, for example, a Trump era decision known as “Matter of A-B-,” with which former Attorney General Jeff Sessions declared with inexplicable logic, that people escaping domestic violence and gang brutality “generally” should not receive asylum.

And as time was running out on Trump’s term in office, then Acting Attorney General Jeff Rosen issued yet another opinion in A-B- in order to slam the door still further on asylum seekers by slashing additional protections, this time for people persecuted because of their family relationships.

“These decisions were legally flawed and injected unnecessary confusion into the decision-making process, leading judges to wrongly deny protection by prejudging cases, rather than providing each case fair consideration on its own facts,” wrote Brianna Krong of the wrongs that Wednesday’s changes addressed.

The effect of these particular Trump-era restrictions fell in particular on women, children, and LGBTQ+ people, many of whom were reportedly ordered deported to their home countries, where they would face the threats violence that caused them to flee in the first place.

On Wednesday, AG Garland said that the Departments of Justice and Homeland Security are presently working to clarify how such cases should be decided in the future.

“These decisions involve important questions about the meaning of our Nation’s asylum laws, which reflect America’s commitment to providing refuge to some of the world’s most vulnerable people,” wrote Associate Attorney General Vanita Gupta in a memo to the DOJ’s Civil Division, following Garland’s announcement.

Gupta further told the Civil Division’s Office of Immigration Litigation, which is responsible for defending the decisions of the Board of Immigration Appeals, that they should “review any pending cases” that may be affected by the AG’s spiking of the previous rulings, “and take appropriate steps in light of that development” including reconsidering asylum claims based on this change in the law.

“Families facing persecution qualify for asylum under any reasonable interpretation of the law,”said Bradley Jenkins, federal litigation attorney at the Catholic Legal Immigration Network, Inc. (CLINIC).  “And it is encouraging to see Attorney General Garland take this step toward restoring the asylum system. We hope that the rulemaking process will result in further progress toward a fair and humane asylum policy.”

Tracey Renaud, the acting director of the US Citizenship and Immigration Services (USCIS) also praised Garland for getting rid of more of the Trump era anti-asylum restrictions.

“We applaud the Attorney General’s decisions today vacating two prior decisions that limited asylum eligibility for individuals fleeing violence perpetrated by domestic partners or on account of familial relationships in their home countries,” said Renaud in an emailed statement (followed by a series of Tweets).

“USCIS is committed to embracing our nation’s highest values by expanding legal migration pathways and administering humanitarian programs that allow for greater access to protection for eligible individuals.”