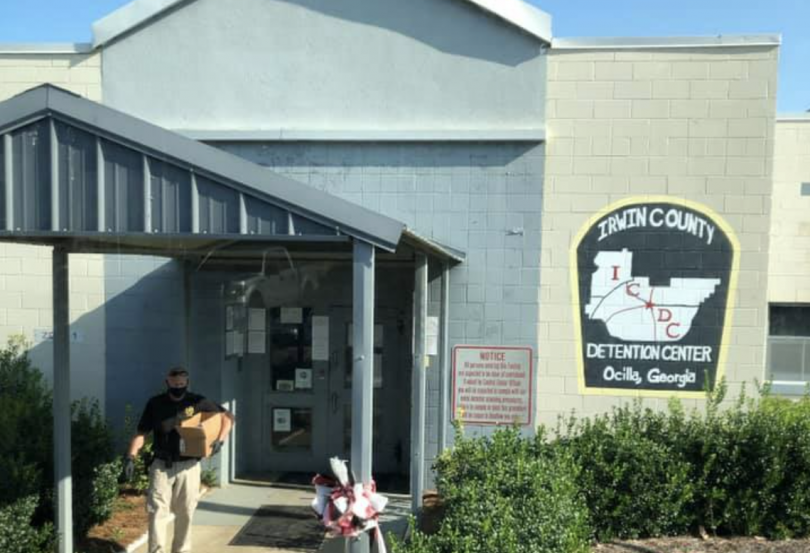 On Thursday, ten women filed medical grievances against a gynecologist at a U.S. Immigration and Customs Enforcement facility, alleging that Dr. Mahendra Amin conducted unnecessary medical procedures, including hysterectomies, without their informed consent. In their complaints filed with assistance from the Southern Poverty Law Center, the women are calling on the Georgia Composite Medical Board to revoke Dr. Amin’s medical license, and are seeking a criminal investigation and civil damages.

Each of the women is or was locked inside the Irwin County Detention Center, a federal immigration detention facility in Georgia operated by the private prison corporation LaSalle Corrections.

In addition to allegedly conducting a number of coerced hysterectomies, the women said Amin subjected many of them to painful examinations and other procedures without consent. Amin has been accused of performing questionable and unnecessary treatments on at least 57 people, lawyers reported to the Senate Democratic Caucus in October.

“The pain was excruciating,” one of the women, identified as Yanira, said in her complaint.

Yanira said that despite telling nurses and Amin that her uterus and other reproductive organs had been removed, and that she just needed an estrogen prescription, the doctor forced a painful and rough transvaginal ultrasound on one occasion, and a Pap smear on another. On both occasions, she bled for days afterward and was in severe pain.

“When I laid back, he pushed a monitor inside my vagina,” she said of the medical procedure she says Amin forced upon her in February 2020. “He just jammed it up in there.” Then, she said, Amin took the device out and jammed several gloved, but unlubricated fingers inside her. “The pain was excruciating,” she said.

“I have survived extreme sexual violence, and this felt like being raped again,” Yanira wrote. “I kept squirming up into the chair. I told him, ‘no,’ but he kept going. ‘Relax,’ he told me.”

Yanira has lived in the U.S. for nearly her entire life — since she was three years old.

Several of the other women who did not speak English had even more trouble understanding what Amin was doing to them. No interpreter was present.

Amin “did not explain anything, and he did not show me the picture from my ultrasound,” another woman, Tatiana said. “I did not understand what was happening or why – they did not have an interpreter for me. They did not give me any paperwork about the appointment or my diagnosis.”

“I had no idea what they were going to do with me because they were speaking to me in English, and I only speak Spanish,” said a third woman, Soraya. “They never used an interpreter. They also never asked about my medical history nor if I was allergic to anything.”

One woman, Yanira said, had a painful, untreated infection in her breast, which she worried she might lose without proper care.

These stories came to light because of one woman’s courageous whistleblowing against Amin, the private prison company, and ICE.

On September 14, with the help of Project South and a handful of other organizations, a nurse named Dawn Wooten filed a complaint in which she said that a number of women in ICE custody were taken to Amin, whom she identified as the “uterus collector.”

What the members of congress heard from the women they spoke with, according to Representative Nanette Diaz Barragán, was “horrific.” These women cried as they described “human rights abuses,” she said — things like untreated illnesses, inadequate nutrition, unsanitary clothing, and retaliation for speaking out, in addition to the specific actions of Dr. Amin.

Three of the women who filed medical complaints this week have already been deported. In early November, five women told VICE News that ICE deported or tried to deport them before they could give testimony about the treatment they received from Amin.

On November 19, the congressional leaders sent a letter to federal justice officials demanding that the deportations stop.

Five days later, the Department of Justice agreed to temporarily halt deportation proceedings against the women who accused Amin of abusing their bodies and their rights.

“They [ICE] don’t want me to talk about the abuses that are taking place here at Irwin,” said Yanira, who is still incarcerated at Irwin. “But I feel like I must speak out, I want to tell the world that the women here at ICDC are human beings. We are women, not animals.”