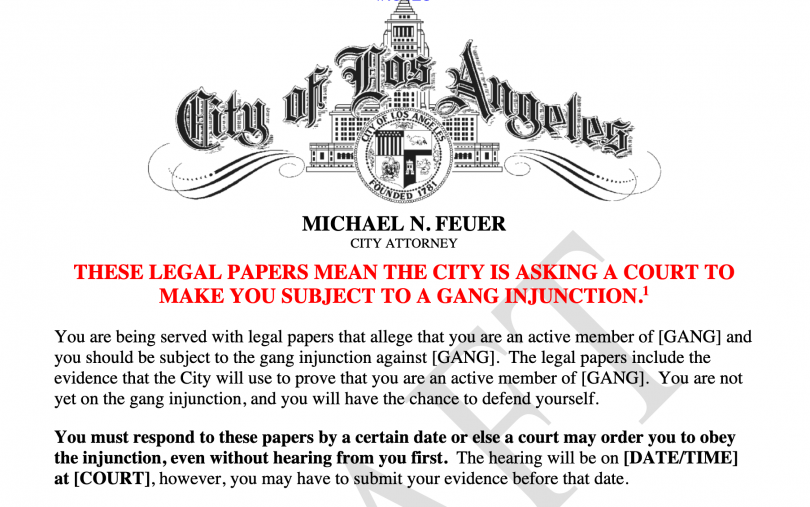 In October 2016, the ACLU filed a lawsuit against the City of Los Angeles and its justice leaders, alleging “unconstitutional enforcement” of approximately 46 gang injunctions restricting the actions and movement of thousands of LA residents, without allowing those individuals to contest the city’s claim that they were a gang member.

Now, the City of LA has agreed to a proposed settlement of the class action lawsuit that will, among other changes, require the LAPD to prove a person is a gang member in court before enforcing a gang injunction against them.

The ACLU of Southern California, together with the Urban Peace Institute, and the law firm of Munger, Tolles & Olson LLP, brought the class-action lawsuit on behalf of the Youth Justice Coalition, and Peter Arellano and Joseph Reza, two plaintiffs representing the class.

Gang injunctions work like restraining orders, but restrict groups of people — specifically purported gang members or associates — rather than individuals.

The restrictions outlined in an injunction may prohibit those named from entering a defined geographical area referred to as the “Safety Zone,” associating with others who are purported gang members, even if they aren’t named in the injunction, and participating in certain activities that are otherwise legal.

Inclusion in a gang injunction can mean that being seen in public with family and friends, gathering on street corners, working with other residents from their neighborhood, possessing felt tip markers, or wearing certain clothes can result in an arrest. Some injunctions fail to provide an exception for school or church attendance.

Those named in injunctions are banned from going certain places and participating in specific activities. If anyone included in an injunction violates any of the restrictions that the injunction enforces, that person can end up in jail.

Plaintiff Peter Arellano, who was 21 when the suit was filed, was a teenager when he was listed in an Echo Park injunction that was put in place in 2013.

According to the complaint, this was particularly difficult for the young man as Arellano’s father, brother, uncle, cousin, and some of his childhood friends were also reportedly named as gang members.

Arellano’s home where he lived with his parents was within the “Safety Zone” of the injunction. This meant that Arellano feared getting arrested even for being seen in his front yard with his brother, or sitting porch with his dad, because such activities fell within the prohibition of associating within “public view.”

The second plaintiff, Jose Reza (who was 39 when the complaint was filed in 2016) was reportedly born and raised in the Ramona Gardens housing projects of East Los Angeles, which was within the geographical area referred to as the “Safety Zone” for the Big Hazard gang injunction.

According to the complaint, Reza left Romona Gardens in 1999 and moved to Whittier. Nevertheless, the 2006 “Big Hazard injunction” reportedly prevented him from picking up his son, who sometimes stayed in Ramona Gardens with family members. The injunction also reportedly prevented him from taking union jobs with the Housing Authority of the City of Los Angeles to remodel the housing projects because the jobs were located within the “Safety Zone,” according to the complaint.

Like Arellano, Reza “skipped neighborhood gatherings and social events, and even feared arrest while attending a friend’s funeral.”

As was the case for most named in the injunctions, neither man was offered a hearing to contest their designation by the city as gang members.

According to the original complaint, the city’s 46 injunctions naming more than 9,000 individuals were “based on a unilateral and behind-closed-doors determination by police and city attorneys that [those included in the injunctions] are active participants in a street gang.”

To make matters worse, the LAPD has a problem with officers falsely labeling people as gang members to boost their patrol statistics.

This February, the California Department of Justice initiated a review of the Los Angeles Police Department’s use of the statewide gang database, CalGang, in response to allegations that LAPD officers had been intentionally mislabeling people as gang members in order to improve their stop and search statistics.

The LAPD began investigating the issue itself, early last year, and found alarming discrepancies between body cam footage and what officers wrote on gang field identification cards. More than two dozen officers were suspected of involvement. Six members of the department have been charged with falsifying records, so far.

In July, CA Attorney General Xavier Becerra announced that the LAPD would be blocked from accessing any part of CalGang, and all other law enforcement agencies across the state would be unable to access any records that the LAPD had entered into the database — which accounted for about a quarter of all of California’s 78,000 gang records.

Being designated a gang member in the error-prone CalGang can affect employment prospects, lead to sentence enhancements in criminal cases, trigger deportation proceedings, and lead to inclusion in a gang injunction.

Back in 2017, 7,300 people were removed from Los Angeles gang injunctions, after the LA City Attorney’s Office and the LAPD conducted a joint audit of the injunctions, in response to the previous year’s federal complaint. The removals accounted for approximately 82% of the total number of people subject to gang injunctions in the city between 2000 and 2017.

And since April 2018, a federal judge’s order has banned the city from enforcing injunctions against an individual without proving to a court that the person was an active member of a gang.

Under the terms of the settlement, this ban becomes permanent. Everyone covered by the class action lawsuit have thus been removed from injunctions, and can only be put back on an injunction if the LAPD can prove they are actively participating in a gang. They must offer accused individuals “the same due process rights as a defendant,” according to the settlement.

“They can no longer just hand people a copy of the injunction and then enforce it against them,” the ACLU said.