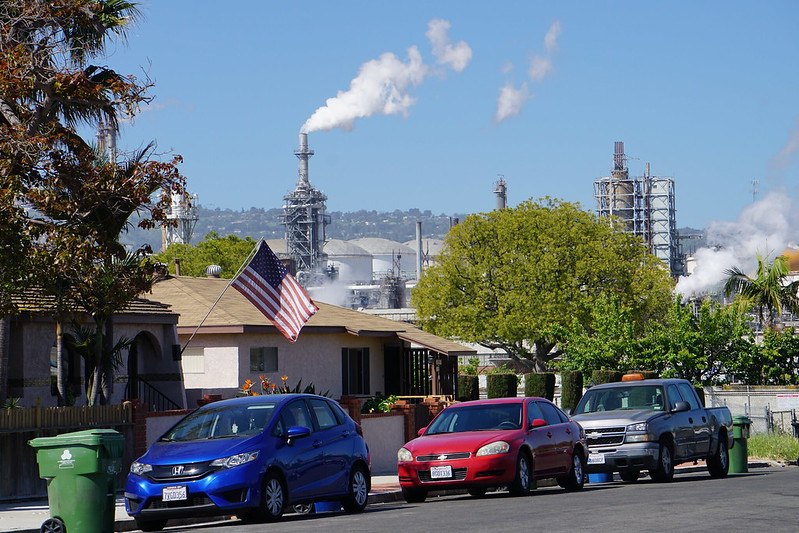 The Los Angeles community of Wilmington is home to the largest concentration of oil refineries in California. The neighborhood’s 53,000 residents, mostly Latino, share their home with 400 industrial sites and five oil refineries. Fumes from the refineries’ leaks and flares pollute the air, and cause leukemia and other forms of cancer, as well as heart disease, asthma, and other physical and mental health problems.

To make matters worse, Wilmington lies just north of the Port of Los Angeles, the busiest container port in the United States, and the Port of Long Beach. Together, the ships, trucks, and cargo cranes make these twin ports the largest single source of pollution in Southern California.

This slow environmental violence is made still worse by climate change and resource scarcity, breeds illness and early death, and drives interpersonal violence, a trio of panelists told those gathered as part of a 2022 National Fellowship hosted this past week by USC Annenberg’s Center for Health Journalism.

Adam Mahoney, a reporter who covers the environment and climate for Capital B, grew up in Wilmington. His childhood home was just a mile from Phillips 66, which emitted the highest volume of toxic gas of the five Wilmington refineries. He grew up seeing firsthand the impacts a long history of environmental injustice and divestment had on his community.

In a six-month series, supported by CHJ’s 2021 Data Fellowship, Mahoney looked at the connection between Wilmington’s status as “an industrial dumping ground” and the poor health and violence afflicting the community.

Through an intensive data analysis, Mahoney found that Wilmington experienced a higher-than-expected death toll during the first two years of the pandemic.

There were 236 “excess deaths” beyond what officials would have expected in a typical non-pandemic year. When Mahoney adjusted for population differences, he found that Wilmington experienced 1.5 times more excess deaths than the California average, and almost two times as many as neighboring San Pedro and the two other very affluent cities that border Wilmington — Rancho Palos Verdes and Palos Verdes Estates — where pollution rates are much lower.

His findings, which were co-published by The Guardian, Grist, and High Country News, were even more alarming, given that Wilmington has the fourth-youngest population among 270 neighborhoods in Los Angeles County, Mahoney told fellow journalists last week. Further investigation revealed that pollution exacerbated illness was largely to blame for the excess death in Wilmington, not COVID-19.

Mahoney’s analysis of death data also brought to light the city’s connection between air pollutants — which can disrupt the endocrine system, cognition, and mental health — and interpersonal violence.

He found that nearly 200 people had been fatally shot, 10 of them by police, since the year 2000. “That amounts to nearly 2.5 times as many fatal shootings as the Los Angeles County per capita average and four times as many as those experienced in the cities that border Wilmington — San Pedro, Rancho Palos Verdes, and Palos Verdes Estates — over the same time period,” Mahoney wrote.

Mahoney’s reporting explored the academic theory of “cues to care,” which states that “if a community does not have markers to show they should care about the physical environment around them, they aren’t going to care, and it’s going to impact their relationships with each other.”

The reporter also found that six months after one local organizer built a community garden in a neighborhood hit hard by gun violence, the same neighborhood has “seen a difference in how people interact with the physical environment around the garden and one another.” Before, people dumped trash and sprayed graffiti; now there is more intention and care paid to the landscape.

Through door-knocking and postcards, Mahoney contacted 2,200 residents to ask them about what it’s like to live in Wilmington amid the slow environmental crisis unfolding around them. He asked them to fill out a 45-question survey.

A third of the 75 households that participated reported cancer, compared with one in 10 U.S. households. Often, multiple generations of the families Mahoney interviewed had cancer. More than 50% of respondents reported a member of the household had asthma, three times the national average. Similarly, depression and anxiety far outpaced the national averages.

Residents told Mahoney they couldn’t risk opening their windows on hot days, despite having no air conditioning.

Alicia Rivera, a community organizer with the environmental justice group Communities for a Better Environment Wilmington, told fellows that community members report feeling anxiety and “are in bad humor” when it’s hot. They hear the clicks of the oil rigs going up and down, even when they go to bed, she added.

Rivera is using Mahoney’s survey results to challenge the official narrative, and to push for regulation from the South Coast Air Quality Management District. Meanwhile, oil refining operations keep expanding. That’s why projects like Mahoney’s are so important, she said.

When people say that California is very environmentally friendly, they’re repeating a falsehood, said Julie Sze, professor of American Studies at the University of California, Davis, and author of three books, including “Environmental Justice in a Moment of Danger,” published in 2020.

There is “a legacy of oil, violence, policing, and pollution that saturates places throughout the state,” Sze said.

It’s important to recognize and name climate injustice as violence, she said. It is decades of the “slow violence” of pollution, born of systemic racism, that leads to the “fast violence” of shootings and assaults.

Sze gave the example of Freddie Gray, the 25-year-old Baltimore man brutally restrained by police while he cried, “I can’t breathe.” Gray ultimately sustained further fatal injuries when he was transported, handcuffed and without a seatbelt, in the back of a careening police van. Long before the fast violence of his deadly encounter with police in 2015, Gray was slowly poisoned by exposure to lead in his childhood home.

“Slow violence,” a term popularized by Rob Nixon, a Princeton University English professor, generally goes unseen by those not affected.

That’s why it’s critical for reporters writing about injustice to talk with experts who are living and working in the impacted communities, said Sze. Journalists can start by asking, she said, “Who is most vulnerable but least responsible?”

This story first appeared at The Center for Health Journalism, where Taylor Walker is part of a 2022 fellowship.