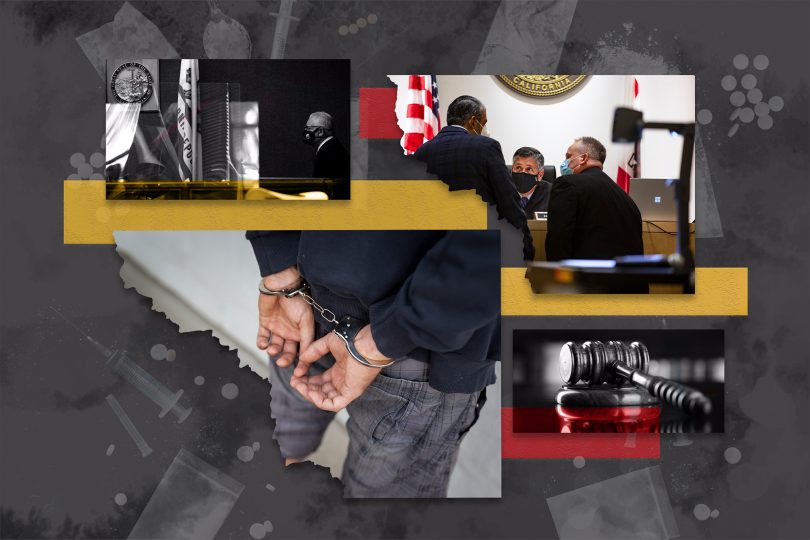 Last year, Yolo County tried an experiment: No one arrested for simple drug possession would be prosecuted or sent to drug court. Instead, those arrested with drugs were directed to the county health department.

The county was responding to a trend across California: Significantly fewer people are choosing to go to drug court,  in part because the penalties for drug possession were reduced by the passage of Proposition 47 in 2014.

Without the threat of potential jail time, people just weren’t showing up – participation in Yolo County’s drug court is down 86% since 2014.

“What I was trying to do was test the hypothesis that this was solely a health issue,” said the plan’s architect, Yolo County District Attorney Jeff Reisig. “It was a total failure.”

The rise and fall of drug courts in California has been a 30-year saga, with California’s first contemporary drug court opening in Alameda County in 1991 — the nation’s second.

The vision – to offer offenders a chance to avoid criminal conviction by entering a treatment program overseen by this special court – took off in California. By 1998, the state was pouring $4 million each year into the program to fund drug courts in 34 counties.

Then along came Proposition 47 in 2014, slashing sentences for drug possession in California.

And the popularity of drug courts began their downward slide.

A 2020 paper from the New York-based Center for Court Innovation surveyed California drug courts after the passage of Prop. 47 and found participation was down statewide by 67% between 2014 and 2018.

What I was trying to do was test the hypothesis that this was solely a health issue. It was a total failure.

Data provided by the county show that fewer than 12% of people referred to the county’s Health and Human Services Agency even answered an initial phone call to establish a treatment plan in the first six months of 2021.

Now, Reisig is rolling out what he calls Drug Court 2.0, which expands the kinds of drug crimes eligible for drug court diversion programs. And the new program compels participants to meet with a representative from the county health department while still in the courtroom.

“It’s having a lot more success than the phone calls did,” Reisig said.

In drug court, participants usually attend after pleading guilty to a drug-related crime. If participants graduate – which usually means completing job training in addition to staying sober – the original criminal charges are reduced or dismissed.

Unlike most of the recent criminal justice debates in California, this one isn’t a question of conservative versus liberal, or evidence-based reforms versus tough-on-crime initiatives.

But when these two darlings of the criminal justice reform movement collide, drug courts have lost out.

Now, as in Yolo County, drug courts across California are expanding eligibility requirements to draw in more participants or resigning themselves to a far smaller caseload post-Prop. 47.

In San Diego County, more than 650 people participated in drug court in the 2013 fiscal year, two years before Prop. 47 was enacted. That was down to 255 people last year.

In Alameda County, more than 640 people attended drug courts between January 2014 and September 2015, an average of 30 people per month. After the passage of Prop. 47, that dropped to 14 people per month in the 2015 fiscal year, and it has stayed at that rate since.

San Mateo County officials saw fewer than five people per month in drug court after the passage of Prop. 47. The court is now considering expanding its eligibility requirements to include felony crimes.

There is no statewide repository for drug court data, nor much consistency in data collection among counties.

There’s not really stable funding, so many of the (drug) courts know they can’t support a big program.

Some counties provided CalMatters every drug case since 2010; some said they didn’t have the data or didn’t know where to find it. Several asked for weeks to review their records. A few warned the search would be expensive.

“It’s the Wild West when it comes to drug courts,” said one court executive who was not authorized to speak to a reporter, noting that there is little control at the state level over eligibility requirements or data collection.

That’s partly due to the Legislature, which rejected a request from the state Judicial Council for five new administrative positions and $30 million each year to continue to run collaborative justice courts.

Prison realignment, passed in 2011 as AB 109, took away state funding for drug courts. Instead, money was given straight to county behavioral health departments, which didn’t use it all for collaborative courts.

The result, Byrne said, was that funding for collaborative courts dropped significantly. Some counties have kept their drug court operations afloat through federal grants, others just muddled through.

“There’s not really stable funding, so many of the courts know they can’t support a big program,” Byrne said.

Realignment and Prop. 47 both seemed to dramatically affect drug court participation in San Francisco County. In 2010, one year before passage of the realignment bill, 500 people attended drug court in the county. By 2012, it was down to 335.

“From a common sense standpoint, why go into a treatment program rather than just walk out of the courthouse free.”