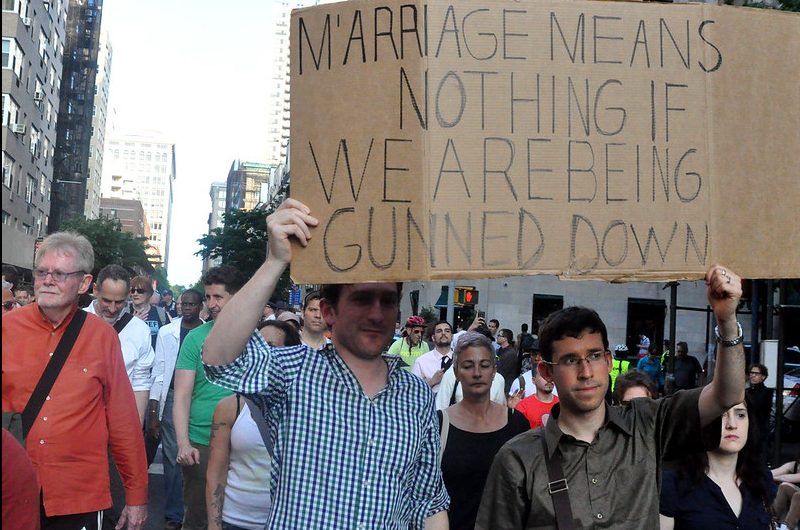 By W. Carsten Andresen, The Conversation

On January 21, New Jersey became the ninth state in the nation to ban the gay panic defense, a strategy that the governor said is “rooted in homophobia.” W. Carsten Andresen, a criminal justice scholar, has been building a database of murder cases that use the gay panic defense. We asked him to tell us more about these cases, and what sets them apart from other murder trials.

What is the gay panic defense?

This is when a man kills someone and claims that he was protecting himself from a same-sex pass or an attempted sexual assault. The offender uses the gay panic defense as an excuse or justification to try to evade punishment for the crime of murder.

What’s an example of this in practice?

One well-known case occurred in 2015, when Daniel Spencer, a guitarist, invited another musician, James Miller, to his Austin apartment to play music together. Later that night, Miller stabbed Spencer four times, killing him. Miller then cleaned Spencer’s apartment, went back to his own home, changed clothes and contacted the police to report killing Spencer.

While there was no physical evidence to suggest an attempted sexual assault, the defense attorney argued at the trial in 2018 that, since Miller had never been in trouble with the police before, the only thing that could explain his committing murder was that Spencer had tried to sexually assault him.

In this instance, the gay panic defense was successful. The jury convicted Miller of criminally negligent homicide, the lowest grade of felony in Texas. Ultimately, the court punished Miller with only a six-month jail term and a 10-year probation sentence.

How did you first become interested in this subject?

Two events put me on a path to researching the gay panic defense.

First, my wife is a family attorney in Austin who does a lot of work with LGBTQ+ clients. Shortly after the birth of our son, I attended a conference with her to help with our son.

At the conference, my eyes opened to the obstacles that the LGBTQ+ community faces in a state like Texas, where there is history of homophobia that continues to the present day. I started to think about what it would be like if Texas didn’t recognize my marriage, if Texas didn’t respect my right to be a parent.

The second event involved an old friend, a wonderful person, who committed suicide. A few days after his death, I learned for the first time that he was gay, and realized that he had lived an almost completely closeted life. To think that he kept this secret, that he spent his life alone, was a terrible realization.

Both of these things disquieted me and set the stage for my future research on the gay panic defense.

How common is the gay panic defense?

This is a difficult question to answer, because these cases are not tracked in a systematic way by the government.

While the FBI tracks several details about homicides that occur annually in the U.S., it does not collect information about the sexual orientation or sexual identity of homicide victims.

It is also difficult to get information about murders where offenders use a gay panic defense in court. I could not find any federal source, or any individual states, that tracked how often defendants used this defense during their murder trials.

To investigate the frequency of these defenses, I had to collect these cases myself and enter them into a database. I read legal articles, social science research and advocacy reports; talked with other people, such as lawyers, to see if they could tell me about specific cases; and searched online for legal appeals and media accounts.

The most recent case I heard about, for example, came to my attention when I was talking with a lawyer about my data. She mentioned a case that she had prosecuted in 1997, which had not shown up in my initial searches.

While I have currently identified 104 cases, I am certain that there are hundreds of cases that I have yet to identify.

Is this defense effective in court?

Based on my early analysis, defense attorneys who enter gay panic defenses can reduce a defendants’ murder charges 32% of the time, even though the majority of these homicides involve incredible violence. The court case resulted in a conviction, but, since the charge was lower, the prison sentence was lower, generally around 18 years.

In the remaining cases, the offender received a more severe sentence, including the death penalty, life in prison and non-life prison sentences that averaged about 31 years. Four cases resulted in acquittals, which suggests that juries might have balked at higher charges.

What else do your data show?

My data are consistent with data from prior research examining LGBTQ+ homicide victims in several ways.

First, the offenders in these cases killed the victims in particularly violent ways, a level of violence that distinguishes them from the majority of homicides.

Additionally, in my data, offenders engaged in what experts might call overkill, stabbing the victim several times. In at least 22 cases, offenders stabbed the victim 10 or more times.

Victims who live a closeted gay life are especially vulnerable. The offenders in these cases seemed to take advantage of this “secret” after they were arrested to ultimately construct a nefarious portrait of these victims in their gay panic defense in court.

Finally, consistent with previous research into murders of LGBTQ people, the homicides in my data set fit into one of two patterns.

In 54% of cases, after the murder, the offender purposefully stole cash, credit cards, jewelry, computers, stereo equipment or automobiles. In New Orleans in 1977, for example, Warren Harris Jr., who posed as a prostitute, killed at least four men and stole their cash.

In the remaining 46% of homicides, the offender engaged in expressive homicidal violence to kill and mutilate the victim. In 2009, Joseph Biedermann met Terrence Hauser in a bar in Hoffman, Illinois, went home with him, and ultimately stabbed him to death 61 times. In Denton, Texas in 2005, Joshua Abbott went home with David Morrison and stabbed him to death 38 times.

Based on my research, these killings seem to have no other purpose to them beyond inflicting violence.

Is this sort of defense permitted nationwide?

In 2013, the American Bar Association called in a proclamation for states to prohibit the gay and trans panic defenses. Since then, nine states have passed legislation prohibiting the gay panic defense.

Yet, this legislation does not necessarily signal an end to homophobia in the courtroom. First, defense attorneys, who have argued that legislation is an unconstitutional violation of a client’s due process rights, may ultimately get these laws overturned.

Second, this legislation also does not ban murderers from arguing that they killed in self-defense in response to an attempted sexual assault. In California, the first state to pass this legislation, Gage McCartney – who strangled a man and claimed self-defense – was recently given a lenient plea deal: manslaughter and a 12-year prison sentence.

Finally, the legal scholar Cynthia Lee has written about how offenders can go around prohibitions issued by judges to introduce gay panic defense strategies. In the Matthew Shepard murder trial, the defense attorney introduced two witnesses to testify that the victim was sexually assertive, even though the judge had prohibited them from using a gay panic defense.

Image by Michael Fleshman, Flickr. New Yorkers march in protest of the hate crime murder of 32-year-old Mark Carson in 2013.

This article is republished with permission from The Conversation, an independent, non-profit media organization established in 2014 that publishes news analysis and commentary written by academics, edited by journalists, and aimed at the public. Read the original article.