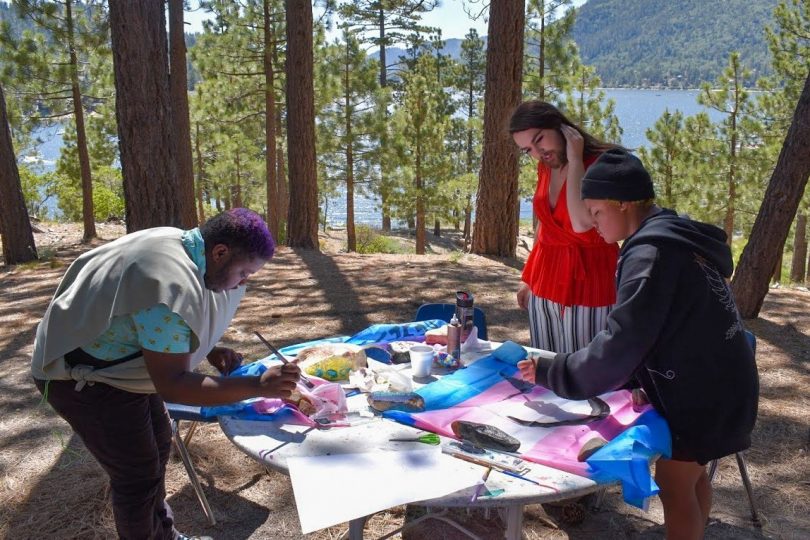 Vincent, an LGBTQ+ activist, was leading a workshop for transgender and gender-nonconforming teens. LGBTQ+ is a term that encompasses marginalized sexual identities and gender identities.

The idea was to help these youth develop a sense of identity in a creative, inclusive and gender-affirming space. The teens, who sat nervously at the table, were painting family portraits on pride flags.

For many of the participants, the exercise was also a way to begin healing from the trauma of domestic abuse.

Vincent, who is 27 and lives in Los Angeles, had designed the workshop as part of a statewide research initiative called Reimagine Lab, which deploys strategies from the product design world to identify the root causes of family violence and find new ways to prevent it. Vincent, who identifies as transgender and uses they/them pronouns, is an educator, LGBTQ+ activist and community organizer.

Beside the lake on that hot summer day, a 14-year-old shared a story about how he was rejected by his parents for being transgender. Vincent listened. The teen told them how his grandparents, who had taken him in, had both died last year.

But the teen found hope in his grandparents’ story. His elders had immigrated to the U.S. and became successful, despite many challenges, the teen shared.

“If they could do that back then,” he told Vincent, “I think I can make it, too.”

Vincent is one of Reimagine Lab’s 16 Californian fellows, who come from diverse personal and professional backgrounds. The fellows have spent the last year researching new ideas and developing prototypes to prevent multi-generational cycles of family violence.

Reimagine Lab applies principles of “human-centered design” to domestic violence. The design theory — which yielded the first Apple mouse, for example — champions the end-users, or in this case, domestic violence survivors and perpetrators, focusing on their needs and ensuring solutions are appropriate for them.

The lab’s fellows formed five teams — each using a different approach to domestic violence prevention. Vincent is part of the History Reimagined team, along with Ana Rosa Najera, a licensed clinical social worker, and Devika Shankar, who supervises the STOP Domestic Violence Program at the Los Angeles LGBT Center. The team’s approach was inspired by a 2001 study by Emory University researchers Marshall Duke and Robyn Fivush, who found that youth who knew more about their family histories were more resilient and had higher self-esteem, greater family cohesiveness and a lower incidence of behavior problems.

In addition to the Big Bear Lake summer camp activity, the group held workshops in September for students at a middle school in Los Angeles. At an Indigenous Pride L.A. celebration in October, the team staffed a booth for transgender Native American teens. The teens painted their family trees on tiles, which they then placed together with others to form a larger community tree.

“The idea was that the kids needed to know their roots,” Vincent said, “before they could spread their branches.”

Not all of History Reimagined activities have gone according to plan. Initially, the team underestimated the importance of earning the students’ trust — many weren’t comfortable speaking about sensitive topics until they had a chance to know the team better. As a result, Vincent and his group have opted to include teambuilding exercises up front. Teens have been more comfortable after that, and have shared their family and community stories through dance, poetry, public speaking and acting.

Transgender and gender-nonconforming populations experience domestic violence at higher rates. The 2015 U.S. Transgender survey found that 54 percent of respondents had experienced some form of intimate partner violence, including acts involving coercive control and physical harm. Nearly a quarter of those responding experienced severe physical violence by an intimate partner, compared to 18 percent of the general population.

Cases of domestic violence among LGBTQ+ youth are often unacknowledged, underreported or misreported, according to the 2006 Lesbian, Gay, Bisexual and Transgender Domestic Violence in the U.S. study. Youth are less likely to use or respond to domestic violence terminology, which has traditionally just described abuse between heterosexual people. First responders and therapists can also express bias and misunderstanding, keeping LGBTQ+ community members from accessing emergency services.

Reimagine Lab is funded by Gobee Group, an innovation design organization, and the Blue Shield of California Foundation.

Reimagine Lab fellows from around the state gathered in Oakland earlier this month to pitch their project prototypes at a demo day event. They hoped to secure funding to continue piloting their design concepts. More than 40 community members, sector leaders, catalysts and funders from California’s domestic violence arena were on hand to hear from the teams. Teams are meeting with potential funders and the lab will soon share the ideas publicly to ensure that others in the field hear about them.

History Reimagined mapped out a three-year budget for a school curriculum project, along with a transition strategy that includes lobbying state legislators, working with AmeriCorps and requesting federal funding. The team continues to pilot the program in southern Californian schools — and ultimately hopes to expand it across the state.

Vincent, whose activism stems in part from their own experience coming out as transgender, wants to help stop the intergenerational cycle of domestic abuse that affects LGBTQ+ youth.

Vincent remains hopeful the “curriculum will help these kids not only address some of this trauma,” but also develop resilience.