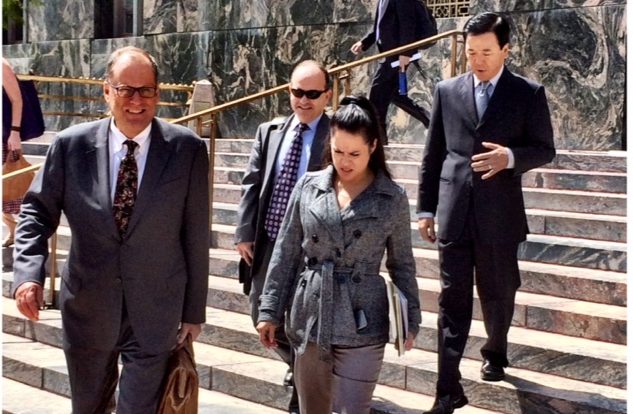 ‘UNWAVERING SENSE OF RIGHT AND WRONG”

Midmorning on Friday, after a week and a half of witness testimony, the prosecution rested its case in the criminal trial of former Los Angeles County undersheriff Paul Tanaka.

But the main event of the day in the courtroom of U.S. District Court Judge Percy Anderson, was when the defense began their case and called their first witness at 9:53 a.m.

Paul Tanaka, for those just joining us, was the second in command at the nation’s largest sheriff’s department and, for many years, the man whom it was assumed was would succeed former Sheriff Lee Baca when Baca stepped down. Instead Tanaka has been charged by U.S. Government with obstruction of justice and conspiracy to obstruct justice.

Specifically, the charges allege that Tanaka oversaw and directed deliberate efforts to get in the way of an FBI investigation into brutality and corruption in the LA County jails that began in 2010. To do so, the feds contend that, from mid-August 2011 through much of September, Mr. Tanaka and department members under his direction devised a scheme to hide an inmate-turned-confidential-informant from his FBI handlers; that they attempted to intimidate potential witnesses into refusing to cooperate with the FBI; and that they falsely threatened a federal agent with arrest (among other allegedly problematic actions).

Using a string of two-dozen witnesses, plus piles of telling emails, records of interestingly-timed phone calls between relevant parties, audio recordings of Brown and other potential witnesses being interviewed by department members, and more, government prosecutors have painstakingly built what they hope is an impregnable case against the former undersheriff.

During his three hours of testimony, Tanaka and Jerome Haig, one of his two attorneys, attempted to smash as many pieces of the prosecution’s case as they possible could.

Tanaka began his testimony by painting a picture of himself as an accomplished, and scrupulously honest and hardworking lawman. He told about his graduation from Loyola Marymount University, his background as a Certified Public Accountant, the fact that he is now in his twelfth year as the mayor of the city of Gardena, and his speedy rise through ranks of the Los Angeles Sheriff’s Department.

Tanaka then spent time telling the jury about his management style and his ethics.

He described himself as someone with an “unwavering sense of right or wrong,” who attempted to impart that ethic to those working under him.

For instance, he said that when he visited the department’s various stations, he always told deputies to “make sure that you’re as smart as you can be, know all the laws, know the lines of right and wrong, and do your job,” but do it in “the right way because that’s our obligation as peace officers.”

Tanaka also portrayed himself as a hard worker who demanded the same from other supervisors, noting that when was the assistant sheriff he often “had difficulty” finding chiefs, commander and captains who often seemed to ditch work for part of the day. So, he said, he ordered that supervisors “have to be at work,” Monday through Friday from 9 to 5.

Tanaka implied that some of the prosecution’s witnesses who alleged negative things about him were, in reality, disgruntled slackers whose feet Tanaka had held to the figurative fire.

THE MATTER OF THE F-BOMBS

Several prosecution witnesses quoted instances of Tanaka reportedly dropping the F-bomb with impressive frequency in meetings. Tanaka and his lawyer addressed this issue as well.

“Have you ever use language not suitable for television?” Haig asked his client.

“In administrative sessions? No,” Tanaka said.

Tanaka hedged this more specific question with the classic, non-denial denial. “I have no recollection of making that comment,” he said.

About the testimony of witnesses who said he told deputies to police in the “gray area, or by crossing “the blue line”—meaning crossing over the line of legality, Tanka was more definitive.

No, said Tanaka, he did not ever talk about “the blue line.” As for the gray area, he explained that this term in no way suggested illegality. To illustrate, the former undersheriff held his hands out in front of his chest, but far enough apart that he could have been holding a long sourdough baguette between his palms.

(See our story on those witnesses’ testimonies here)

WHO REALLY GAVE THE ORDERS?

Of necessity, much of Tanaka’s testimony addressed the issue of whether or not he gave the orders that precipitated the various actions that are the basis of the government’s criminal allegations.

Tanaka insisted that any orders that were given were “lawful” and came from then sheriff Baca, who Tanaka said was “consumed” by the issue of federal informant Anthony Brown, and the contraband cell phone that Brown had paid an LASD deputy to bring to him in return for a bribe, as part of an FBI sting.

When Haig asked his client if he issued “any orders that Anthony Brown should be hidden from the FBI?” Tanaka answered with a firm no. He also said he did not give orders to ignore a federal grand jury subpoena. Nor did he give orders to confront a federal agent, or keep the FBI from seeing inmates.

Tanaka said he didn’t remember personally giving ICIB Captain Tom Carey any kind of instructions about investigating the matter of Brown and the contraband cell phone.

“I didn’t have any investigative experience,” Tanaka told the jury reasonably.

Friday’s most dramatic moment came just after Tanaka had finished testifying. The court day was nearly over but, with ten minutes remaining, Judge Anderson called the prosecution to begin its cross-examination.

“He did not,” answered Tanaka.

“And that deputy clique was known as the Vi…..”

It had been a long and strenuous day and it appeared to take a couple of seconds past the word “clique” for the defense to grasp where this was going.

Then they got it.

Fox did not fully get out the first syllable of the word “Vikings,” before Tanaka’s attorneys bounced from their chairs like spring-loaded jacks-in-the-box, shouting “objection, your honor!”

The Vikings is, of course, the tattoo-wearing, sign-throwing deputy clique that was most active in the department from the mid-1980’s into the 1990’s, and was the focus of a huge class action lawsuit—Thomas v. the County of Los Angeles—that alleged a wide variety of brutal and illegal actions by deputies toward more than 70 community members, each of whom submitted affidavits. These deputies, wrote U. S. District Judge Terry J. Hatter Jr. of the Lynwood Vikings, “…regularly disregard the civil rights of individuals they have sworn to protect.”

More relevantly here, it was the group of which Mr. Tanaka was/is famously a member.

Even Judge Anderson’s eyes appeared to be pin-wheeling as he hastily called for a sidebar.

When finally the two groups of attorneys returned to their seats, neither the prosecution nor the defense team looked particularly cheerful so it was impossible to guess which side might have prevailed at the sidebar.

“I believe we’ve done about as much as we can do for today,” Anderson said noncommittally from the bench and then told the jury that the court was going to break until Monday, and delivered the usual admonition to jurors about not talking to anyone, or reading or watching anything pertaining to the trial.

“As for the issue we discussed at sidebar,” Anderson said, then he asked for short briefs by both sides by Sunday, as to why the court should allow this line of questioning “or why we should not.”

And so the day ended with a cliffhanger.

Monday should be interesting.

POST SCRIPT: For your reading pleasure, you can find the government’s brief here.

And the defense’s brief here.

Plus the defense is trying one more time to get the judge to grant Lee Baca limited immunity and to compel his testimony—or at the very least, allow in snippets of previous interviews with him by the feds. You can find that motion here.

On Friday afternoon, I was on KPPC FM with Nick Roman for a quick story talking about the trial, Paul Tanaka’s testimony and what is to come. You can find the podcast and a web summary of the story here.

…Tanaka testified for nearly three hours in what was the main event of the day, according to Celeste Fremon of Witness L.A., who’s been following the trial. The prosecution rested Friday morning after a week and a half of testimony on Tanaka’s alleged crimes.

Tanaka answered questions trying to dismantle the structure of the prosecution’s arguments Friday, Fremon said. The judge began to allow cross-examination, but when prosecutor Brandon Fox started to ask about Tanaka’s involvement with the deputy gang known as the Vikings, the defense objected. The judge ultimately told everyone to come back Sunday with briefs on why that line of questioning should be allowed.

While the Vikings aren’t directly related to this case, Tanaka has allegedly been a member for many years of the deputy gang that made news in the 1990s and was part of a class-action lawsuit, Fremon said. The reason for the question, Fremon said, was that it speaks to what the government is calling the context of Tanaka’s alleged style of supervision as undersheriff.