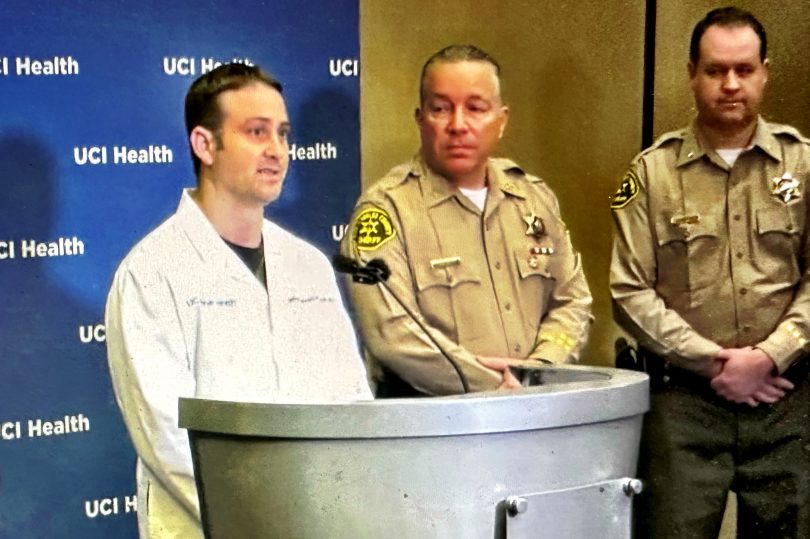 Slightly before 6:30 a.m. Wednesday morning, November 16, an SUV traveling southbound on Mills Avenue north of Telegraph Rd. in Whittier, CA, veered into the wrong lane and plowed into a group of first year trainees of the Los Angeles Sheriff’s Department who were, at the time, running northbound on Telegraph.

The car left a path of devastation in its wake, injuring 25 of the trainees, five of them critically.

According to Sheriff Alex Villanueva, who held a press conference earlier today at the UC Irvine Medical Center, which is the only level one trauma center in Orange County, and which received four of the injured trainees.

(Although the accident occurred in Whittier, which is in LA County, UCI Medical Center is only around 15 miles from the accident site, meaning it was slightly closer to the crash site than County USC hospital is located.)

At the time they were hit, a group of approximately 75 recruits were on a routine run, according to Captain Pat McDonald, head of LASD’s training bureau. Because they were running along what is often a traffic laden street the recruits reportedly were protected by two radio cars that are safety vehicles, meaning they can block traffic when need be.  The trainees were also accompanied on their run by eight of what are called “road guards.”

Sources tell us that the LASD trainees were running in two formations at the time of the incident, with those in the senior class running ahead of the freshmen.  As a consequence, the senior group was either already out of danger by the time the SUV veered toward the runners, or had crucial seconds to jump out of the way.

However, the freshmen were not similarly able to dodge the oncoming SUV.

Some of the recruits on site ran to nearby County Fire Station 96 in unincorporated Whitter, and told those at the station what had happened.

The firefighters ran immediately to the scene and began triage.

According to LA County Interim Fire Chief, Anthony Marrone, some LASD personnel rushed four of the most critically injured recruits to a hospital right away, rather than waiting for paramedics, “likely saving their lives.”

Dr. Jeffrey Nahmias of UCI Medical Center, said that his hospital still had the four patients, one of whom is critical. Nahmias also appeared to agree, in this particular instance, with the idea of rushing the four injured recruits to the medical center, rather than waiting.

At the press conference, Sheriff Villanueva reported that one of the injured trainees experienced an amputation due to the accident.  We have heard that this trainee has lost both feet.

Another critically injured trainee is on a ventilator, at one of the other of the five hospitals.

There were also multiple reports that the vehicle sped up as it approached the trainee victims. More recently, however, sources in touch with those present on site have suggested that the acceleration was likely caused by panic, not malicious intention.

The driver, who tested negative for alcohol, is reportedly cooperating with the California Highway Patrol’s investigation of the terrifying event.

One additional worrisome issue some LASD sources told us, is that the trainees do not have the same benefits as department members would in such a situation.

Hopefully this is a problem that can be remedied.

Sheriff Villanueva said it is his goal that all of the recruits can come back to training and graduate.

May that be the case.