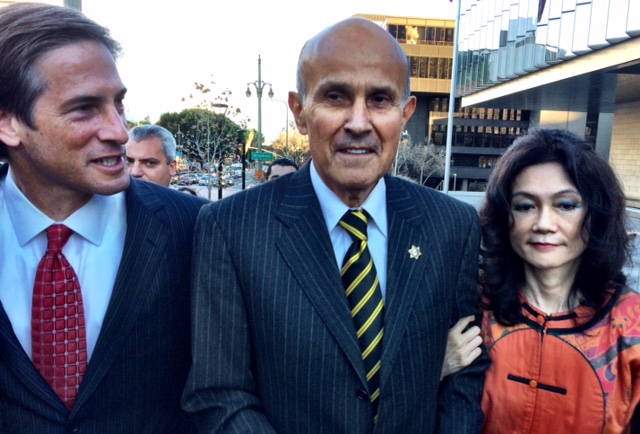 On Tuesday at 11 a.m., former LA County Sheriff Lee Baca, his team of attorneys, and the prosecution team, will meet in the courtroom of U.S. District Court Judge Percy Anderson for a status conference to talk about where the government’s prosecutors intend to go from here with Baca’s case.

Will the feds retry charges of obstruction of justice against the former sheriff? Or will the prosecutors simply cut their losses and move on to Part 2 of Lee Baca’s court proceedings, namely a brand new trial in which Baca will face charges of making false statements to federal officials during a four and a half hour interview that took place in April 2013, when he was asked about his part in the alleged obstruction of feds’ investigation.. (If you’ll remember Baca’s original trial was cut into two trials, the details of which you can find here.)

Part 1 was, of course, the three-week trial that ended in a mistrial three days before Christmas, with the jury a “hopelessly deadlocked” 11 to 1 in favor of acquittal.

Perhaps the near-acquittal shouldn’t have been a surprise, but to many trial watchers and justice advocates it was.

During the jurors’ nearly 24 hours of deliberation, the panel sent a gaggle of notes to Judge Anderson asking for a readback on this testimony, and a clarification of that jury instruction, actions that strongly suggested that some panel members at the very least were still struggling to decide about something.

Yet, the common assumption among many who observed the proceedings was that, if the jury hung, it would be because one or two people held out for acquittal, while the majority voted to convict.

After all, the Tanaka jury was out for less than three hours before they arrived at a unanimous guilty verdict for the same charges. And Tanaka was the second in command at the LASD, while the buck-stops-here head guy was Lee Baca. Plus seven people in addition to Tanaka have been convicted of obstruction and sentenced to terms in federal prison for following somebody’s orders. An eighth former LASD captain Tom Carey has taken a deal and will be sentenced later this year.

But Lee Baca is not Paul Tanaka, as was made evident by those 11 jurors who voted resoundingly to acquit, while only one lone holdout wanted to convict. (His fellow jurors were not at all pleased with him, according to the two jurors who were willing to talk to the press.)

“It was very clear to all of us—-except for the one person where there was….a bit of a bias,” said one of the jurors who gave only her first name of Sheri. Baca wasn’t guilty, she said. “With the information we were given it seemed clear that the sheriff didn’t know what was going on. How could he, with the vast number of employees under him? How could he?”

Sheri and the rest of the jurors (save the one holdout) kept looking for evidence that the former sheriff had committed a crime, she said. “It became apparent that it was not the case.”

The jury believed that there was likely wrongdoing in the jails, Sheri added. But Baca wasn’t at fault. In fact they believed he had tried to do something about the problems, she said.

“The jury’s inability to reach a verdict in the trial of former L.A. County Sheriff Lee Baca in no way absolves the sheriff’s department or the board of supervisors of their dismissals of years of warnings from the ACLU that corrupt deputies engaged in a systemic pattern of physical abuse of inmates in the county jails,” said Peter Eliasberg, chief counsel at the ACLU of Southern California.

Esther Lim, the So Cal ACLU’s jail monitor, who personally witnessed deputies beating a nonresistant inmate, an account that Baca’s spokesperson Steve Whitmore dismissed in withering tones at the time, replied in a statement that the outcome of Baca’s trial “does not excuse, minimize or erase the years of blatant abuse that were occurring in the LA County jails.”

After the mistrial on December 22, Baca was nearly giddy at the turn of events, hugging well-wishers who approached hi. While, during the trial, the former sheriff seemed to be readying himself to lose gracefully.

THE “CHALLENGE” OF PROSECUTING A ONCE-HUGELY POPULAR FOUR-TERM SHERIFF

“It is always challenging to pursue cases such as these where the government is seeking to hold criminally responsible a highly regarded public servant at the highest levels of law enforcement,” said former Assistant U.S. Attorney Miriam Aroni Krinsky, who was also the executive director of Citizens Commission on Jail Violence, which had very harsh words for both Tanaka and Baca in its final report.

“The prosecution of an iconic and respected figure such as Lee Baca was particularly challenging,” Krinsky told us after the verdict. “Unlike Paul Tanaka, Baca’s involvement in the alleged criminal conspiracy was far more limited and significantly, Baca — unlike Tanaka — could not be accused of having encouraged a ‘work in the grey’ culture that tolerated misconduct and abuse. “

And there were other differences. Unlike the trial of former LA County undersheriff Paul Tanka, who faced the same charges, Baca’s name wasn’t on a list of emails exchanged at crucial moments. Nor were there flurries of phone calls between Baca and the coconspirators, as there was with Tanaka.

As a witness in his own behalf, Tanaka was, at first, very calm and articulate as he disputed the government’s negative characterization of him, speaking directly to the jury about his management style and his ethics, describing himself as someone with an “unwavering sense of right or wrong,” who attempted to impart that ethic to those working under him.

But then lead prosecutor Brandon Fox began hammering the former undersheriff about his membership in the now notorious deputy gang known as the Vikings, and asked if he still had the Viking tattoo on his ankle. Tanaka’s calm cracked, and he had something of a Jack Nicholson in A Few Good Men moment. The jury saw it.

OKAY, SO IS THE GOVERNMENT LIKELY TO RETRY?

Several sources with whom we spoke said they thought the government would not choose to retry the former sheriff, given the 11-1 hung jury.

But when we exchanged emails over the weekend with Miriam Krinsky, she seemed to feel that a second go-around was not off the table for the government at all.

“Under normal circumstances,” she said, “it would be less likely to see a retrial after a jury hang of 11-1. But this is no ordinary case. Rather, in this case – given the successful prior prosecution and prison sentences imposed in regard to a large number of other lower level [department members] — there are strong equities that would suggest giving the case one more go is warranted. The government will likely do an independent assessment of the evidence, what they heard from the jury and what adjustments they think might be warranted or possible in deciding whether to retry.

We agree with Krinsky, that refiling is likely.

Hopefully on Tuesday we will all know for sure—one way or the other.