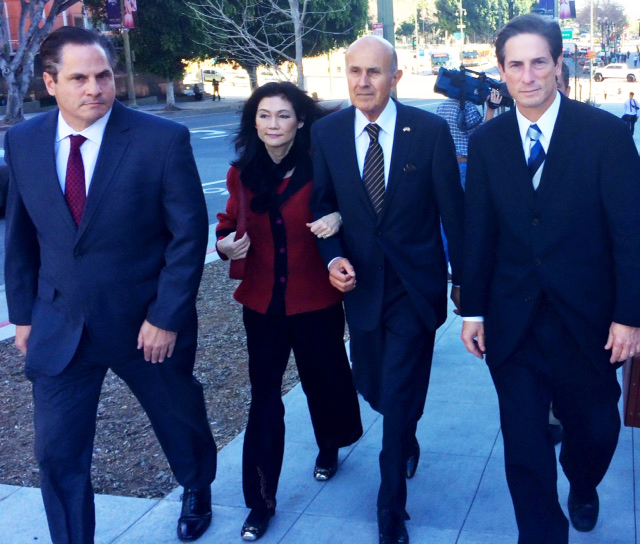 The 9th Circuit Court of Appeals granted Leroy Baca’s motion for bail pending his appeal in an order issued on Wednesday, October 18, 2017.

The appeals court based its granting of the September 8, 2017 motion by Baca’s lawyer, Nathan Hochman, on three principles.

First, wrote the court, the former Los Angeles County Sheriff had “clearly and convincingly shown that he is not likely to flee or to pose a danger to the safety of any other person or the community if released,” No one really disputed this part of Baca’s claim.

The other two principles, however, were the most important.

The most interesting was the court’s conclusion that “Baca has raised in his appeal a ‘substantial question’ of law or fact.”

In other words, there was at least one point in Baca’s appeal that the 9th believed could have merit, namely his attorneys claim that the district court in the person of U.S. District Judge Percy Anderson “erred by excluding expert evidence” of Baca’s Alzheimer’s disease.  This claim, the 9th wrote, “is at least ‘fairly debatable,'” given that “the exclusion of the  expert’s testimony was ‘directly relevant and material’ with respect to Baca’s claim that he lacked the requisite mens rea for the false statements charge.”

(“Mens rea” means criminal intent or guilty mind, in other words an individual’s awareness of the fact that his or her conduct is criminal.

Moreover, “if that substantial question is determined favorably to defendant on appeal, that decision is likely to result in reversal or an order for a new trial of all counts on which imprisonment has been imposed.” (Italics are WLA’s)

Finally, according to the 9th, Baca had shown, through “a preponderance of the evidence” that he filed the appeal “for a purpose other than delay.”

In other words, this wasn’t a frivolous appeal designed solely to keep the 75-year-old former sheriff, who has been diagnosed with premature Alzheimer’s disease, out of prison for as long as possible.

“The record does not support the district court’s conclusion that “the nature of [Baca’s] illness” suggests that Baca is pursuing the appeal for the purpose of delay,” wrote the 9th.

To the contrary,  Baca had “raised a substantial question,” which was “evidence that the appeal is not for purpose of delay.”

So the former sheriff stays out—for a least a few months longer.

Just to remind you: on March 15, 2017, an eight-man four-woman jury sent a note to U.S. District Court Judge Percy Anderson indicating that, after deliberating for approximately fourteen hours, the twelve had reached a unanimous verdict in the trial of former Los Angeles County Sheriff Lee Baca.  They found him guilty of one count each of  conspiracy to obstruct justice, obstruction of justice and making false statement to federal investigators.

On May 12, Judge Anderson sentenced Baca to three years in a federal prison.

Baca’s opening brief for his appeal is due on October 25.

The government’s reply brief is due on November 24.

Oral arguments have not been scheduled.