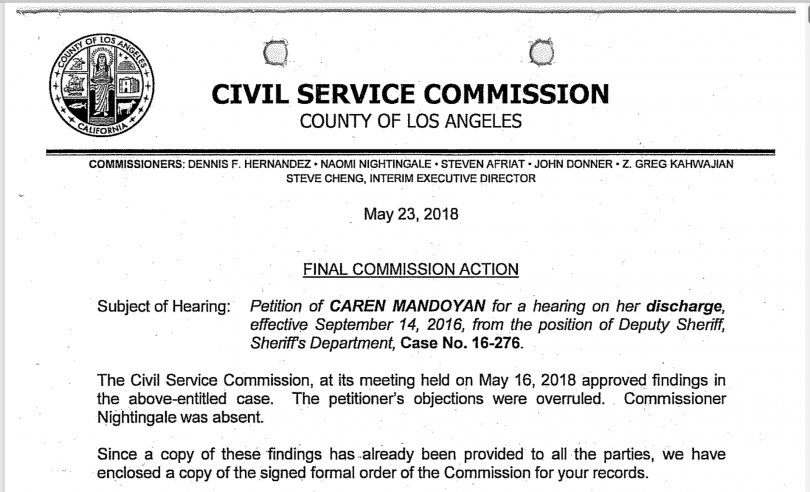 The past two weeks have been active ones in the unendingly controversial case of Los Angeles County Sheriff’s Deputy Caren Carl Mandoyan, the deputy fired by the LASD in 2016 under former Sheriff Jim McDonnell, who was was rehired early this year by Sheriff Alex Villanueva.

Much of the controversy has pertained to the fact that Mandoyan was fired for alleged domestic abuse, along with reported stalking and bullying behavior against his ex-girlfriend, who was also a deputy at the time.

Mandoyan then allegedly lied about these actions to the department’s Internal Affairs Bureau, which is in itself cause for termination from the LASD.

In 2017, the notoriously deputy-friendly Civil Service Commission upheld the LASD’s firing of Mandoyan.

Last Tuesday, Sheriff Villanueva told members of the county’s Civilian Oversight Commission when they questioned him—yet again—on the Mandoyan matter, that there was exculpatory evidence, which had been excluded from the Civil Service Commission hearing.  This evidence, he said, demonstrated the false nature of the department’s Internal Affairs investigation against Mandoyan.

Villanueva referred to a memo that Mandoyan wrote to his supervisor regarding a phone call that his former girlfriend —-whom we’ll call Deputy X—made to him, during which she used a lot of swear words, and threatened to report him for his alleged actions, if he didn’t back off with his alleged stalking of her.

Villanueva seemed to suggest the memo had been deliberately ignored by the investigation, thus demonstrating the false nature of the department’s Internal Affairs investigation of Mandoyan.

(For the record, a memo written by Mandoyan to his then Lieutenant about a June 2015 angry and threatening phone call from Deputy X is discussed at length in several instances during the Civil Service Commission hearings. As to whether it is exculpatory or not is in the eye of the beholder.)

The next day, at a Wednesday morning press conference he again talked about exculpatory evidence that was left out, and told reporters that there was no evidence whatsoever of the purported domestic assault.

The files  include 1978 pages of text, plus nine home videos, some of them very short, which show Mandoyan appearing to try to break into the home of Deputy X, a former deputy who also worked for the department at the time of the allegations. Two of the videos show Mandoyan as he appears to attempt to some how get a sliding glass patio door open or off its track. Two other videos show little more than shadows, as they are taken in the wee hours, but allegedly feature the sound of Deputy X catching Mandoyan trying again to break into her apartment, this time via the bathroom window, while she repeatedly yells at him to leave.

ABC7 News, followed by the LA Times and others, released two of the videos. (We’ve posted three of them here.)

Then after the splash of the video release, NBC4, and ABC7 interviewed Mr. Mandoyan himself who, up until then had been dodging the press.

In his interviews, Mandoyan described the hell he had been through with this controversy over his rehiring. He went on to describe two ex-girlfriends, one of them Deputy X, who got together and conspired to put a completely false case on him that cost him his job.

The nearly 2000 pages of Civil Service Commission files have their own very long and detailed  narrative of the Mandoyan/Deputy X drama that, in certain ways is a weave of contradictions.  Yet it gradually  tells a story,  which we’ll explore in several chapters.

Two of the three best known incidents related to the Mandoyan case, are the two alleged attempted break-ins to Deputy X’s apartment, which she recorded at least partially on video, in December 2014, and January 2015.

The third, of course,  is the alleged assault.

Yet the bulk of the Civil Service Commission’s case files are not about those three allegations. Instead they are a series of snapshots of what Deputy X portrayed as a mutually toxic relationship that started out well when the two began dating in December 2012, when they were both working a the LASD’s West Hollywood station.

But, by February 2014, when she and Mandoyan were no longer working together, as he had transferred to the South Los Angeles patrol station,  things turned another direction, according to Deputy X. She  began to feel Mandoyan was trying “to control and isolate her,” she said in her lengthy testimony, and subsequent cross-examination (in between which, she resigned from the department altogether).

As she described it, Deputy Mandoyan, a well liked training officer with a good reputation at work, became a hyper-controlling, jealous, and bullying boyfriend who told her not to talk to people at work, that they disliked her, and couldn’t be trusted.

He also, according to Deputy X, badgered her not to show up for the required pre-shift briefings. Many times—she told the Civil Service Commission–she complied.

that she not respond to calls with her partners; that she not talk or smile to other men.

Mandoyan allegedly call Deputy X repeatedly while she was working, demanding to know where she was and who she was with. When she socialized separately with family or friends, he would show up uninvited, she testified.

Another form of control, according to Deputy X, was when Mandoyan grabbed her phone and deleted texts,  recordings, and even contact information in her phone’s address book.  It got the point that she began texting or emailing anything she wanted to safeguard to her female cousin, who was also a witness at the Civil Service Commission hearing.

“He would go through her phone, looking through her call logs to see who she was speaking to, [then] would delete things if he didn’t like them…” the cousin testified.

“She wanted to try and make a peaceful exit out of the relationship and not” said the cousin, open Pandora’s Box, as she would put.

“She felt unsafe. Her job was being threatened. He was making threats to her.”

Deputy X’s cousin also said that Mandoyan complained to her personally, when she was visiting Deputy X, at which time Mandoyan would inevitably show up.

“He would just bash her character, about the type of person she is,” the cousin testified, “referring to her as a whore, sleeping with men on the job, sleeping with married men.” He said a buddy told him these things, according to the cousin.

As a further method of control, according to Deputy X, Mandoyan allegedly threatened repeatedly to destroy her reputation and career in the department, along with that of her father, who also reportedly also worked at the LASD at the time.

As an element of his threats, Deputy X testified, Mandoyan referred to the fact that he is a tattoo wearing member of  the deputy clique, “The Grim Reapers.” (The LA Times Maya Lau originally broke the Grim Reapers part of the story.)

He would repeatedly remind her, she said, that he had a long reach, because he  knew “people in high places on the department,” which she believed was a reference to Reapers and others, with whom he was close.

Because of the status and influence she believed Mandoyan to have, Deputy X said she wanted to keep their relationship amicable, even long after she had become disenchanted.  It was important to her that they remain on good terms, she said.

There were witnesses to some of the alleged attempts to bully or control her, including some women friends, one of her supervisors, then a sergeant, now a lieutenant, the female cousin of Deputy X, her radio car partner, and others.

All this, according to Deputy X, was before things really got bad.

Of course, none of this proves that Carol Mandoyan wasn’t set up by Deputy X and others.

We are simply giving you puzzle pieces.  With many more still to come.

The two videos above are from the Civil Service Commission Case File of rehired LASD deputy Caren Carl Mandoyan. In these videos, which depict a sequence, Deputy Mandoyan has allegedly broken into the apartment of his estranged girlfriend, Deputy X, via the bathroom window, after heading to her home just before he thought she would be getting off work. He allegedly did so, surreptitiously, not knowing that she had left her shift early, around 3:30 a.m. instead of 4 a.m. when it actually ended. Halfway through the first video, Deputy X  hears noises so tiptoes to the bathroom door and flings it open, allegedly catching Mandoyan in the act of breaking in. In video two, she is still trying to get him out, as the audio portion of the video makes clear. When Mandoyan repeatedly asks Deputy X, “Where’re you going to find one?” he is reportedly referring to an earlier conversation in which she told him she wants to find a non-toxic relationship, or words to that general effect.

Leave a Reply to Be Honest X