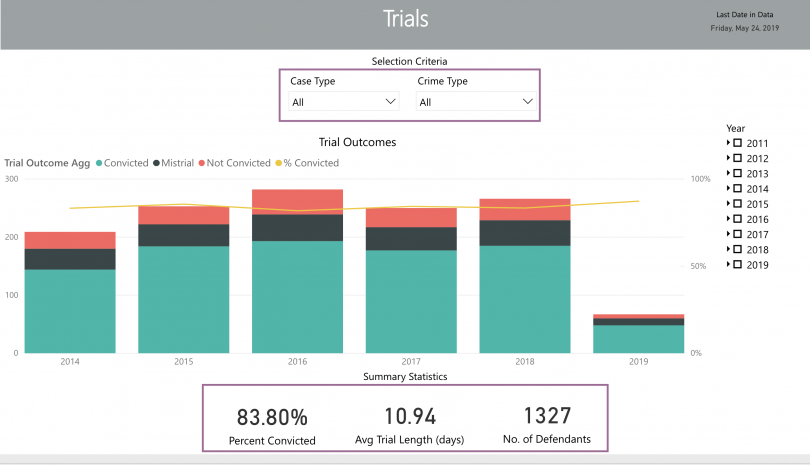 On Wednesday, the San Francisco District Attorney’s Office became the first DA’s office in California to open up prosecutorial data and metrics to the public.

The data, which stretches back to 2011, includes information on arrests, prosecutions, and trials, and their outcomes, and is available to the public through a set of “DA Stat” dashboards on the SF DA’s website. The data is offered up in graph form and can be broken down by case type, crime type, and date range. A quick look at the “trials” dashboard reveals that between 2014 and 2019, there were convictions in 84 percent of cases involving a total of 1327 defendants, and trials lasted an average of approximately 11 days.

The dashboards will receive fresh data every month, according to the DA’s office. (The DA’s data older than 2011 is “not comprehensive or reliable” and thus, not available within the dashboards.)

“We have a finite number of prosecutors, so enhancing community safety increasingly requires us to be smarter about where we focus our existing resources,” says Gascón. “DA Stat empowers management to make informed decisions about resource allocation, and it also empowers the public by giving them insight into their chief law enforcement official’s performance.”

SF District Attorney George Gascón launched DA Stat, in 2013, to serve as an internal system of data collection and analysis meant to improve the office’s effectiveness and reduce bias in the system. San Francisco’s DA Stat is modeled after COMPSTAT, a policing and crime data tool pioneered by former NYPD Police Commissioner Bill Bratton in the 1990s. The revolutionary data system was meant to help law enforcement identify crime trends and solve policing problems, and to bring accountability to the department.

Last March, Cook County District Attorney Kim Foxx released a massive pile of 6 years worth of prosecutorial data, including case-specific details about demographics–race, age, gender–the judge’s name, whether the case was resolved via plea bargain or verdict, sentence type and length, and more.

While the DA Stat portal is not as comprehensive as Cook County’s spreadsheets, Gascón’s office told WLA that additional datasets are on the way. Those metrics will become available as soon as the DA’s team is able to automate the way the data is analyzed.

Certain demographic data may take more time than the rest, however. The SF DA’s Office gets its race/ethnicity data from the San Francisco Superior Court, which uses a 45-year-old system that contains “a lot of dirty and unreliable data,” that “requires extensive cleaning to get meaningful and accurate results.”

The system also “has no category for LatinX” people, according to the prosecutor’s office. Because of this, the court’s mainframe system (CMS) mislabels “persons of LatinX heritage as only white or black and presenting an inaccurate picture of the San Francisco criminal justice system’s demographics,” the DA’s office says. “Our office is working with our criminal justice partners to get a feed of more accurate race/ethnicity data” so that it can be used to improve SF’s justice system and shared with the public.

“Every day you’re making decisions without data is a day you’re not making the best decisions,” said Gascón. “Sharing performance metrics is as much about transparency, good governance and accountability as it is about being an effective manager. Government cannot make the best use of taxpayer resources and effectively manage our most important institutions on a hunch.”