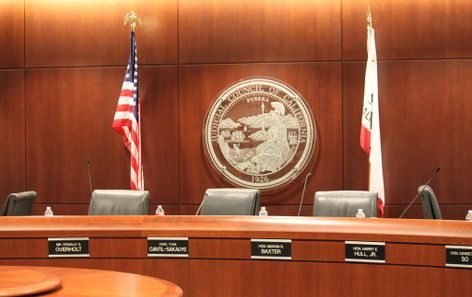 On Monday, the California Judicial Council, led by Chief Justice Tani Cantil-Sakauye, ordered courts to set bail at $0 for all misdemeanors and low-level felony defendants to reduce the number of people inside county jails threatened by the spread of coronavirus.

During the teleconference meeting, the council issued a total of 11 new statewide emergency rules for California’s courts.

The bail rule and the 10 other rules will remain in place until 90 days after the governor says the official “state of emergency” is over, or until the state Judicial Council rolls them back.

The new bail relief applies to every eligible person already in pretrial custody, as well as those who will be arrested in the future. There are some caveats, however.

Some of these crimes include falsifying evidence or dissuading a witness, making felony-level criminal threats, domestic battery, driving under the influence, looting during a state of emergency, obstructing or resisting executive officers in the performance of their duties, and crimes that land a person on the sex offender registry.

The order also says that “each superior court retains the authority to reduce the amount of bail listed in the court’s current countywide bail schedule for offenses” that were excluded from eligibility, as well as for offenses that are “not in conflict with the emergency bail schedule.”

“We are at this point truly with no guidance in history, law, or precedent,” said Chief Justice Tani Cantil-Sakauye, chair of the council. “And to say that there is no playbook is a gross understatement of the situation.”

The council reported that it received more than 100 letters from judges, public defenders, prosecutors, police, and other stakeholders, all of which helped inform the new rules.

“Working with our court stakeholders,” the chief justice said, “I’m confident we can preserve the rule of law and protect the rights of victims, the accused, litigants, families and children, and all who seek justice.”

In a statement released Monday, Los Angeles County District Attorney Jackie Lacey praised the move and said that LA County had put something similar into action last week. “In Los Angeles County, we implemented a zero-bail measure last week that allows us to further reduce the number of people in county jails and courthouses,” Lacey said. “I appreciate the collaboration among criminal justice leaders in Los Angeles County that has resulted in the rapid deployment of new and innovative approaches as we work to try to stop the spread of COVID-19 in our community.”

Her opponent in the DA’s race, former San Francisco District Attorney George Gascón also lauded the council, but argued that at the local level, LA County “can do better.”

Last week, Gascón reported that Lacey’s office had continued to pursue cases involving panhandling, loitering, drinking in public, and driving with a suspended license, and other low-level crimes, even after Lacey announced that she had directed her attorneys to “consider ways to keep nonviolent felony and misdemeanor offenders out of our jails and courthouses” during the coronavirus pandemic.

“California continues to solidify its role as the national leader in adopting aggressive, life-saving initiatives during this crisis,” Gascón said on Monday. “The novel coronavirus has forced our system of justice to confront a not-so-novel question, one that largely defined the criminal justice reform movement even prior to the pandemic: Does keeping huge numbers of people in-custody on small-time offenses pose a greater threat to us all than letting them out?”

Keeping More People Out of the Courthouse Via Remote Proceedings

One of Monday’s other rules says that defendants can appear for pretrial hearings via “remote technologies” or through their attorneys, rather than in person. A third rule allows courts to require court proceedings to be conducted remotely, with a defendant’s consent.

“I’m thankful for the technology to allow remote hearings during this public health crisis,” San Francisco Public Defender Mano Raju said in a tweet on Monday. “However, we need to be very thoughtful about how technology is used in the long-term to ensure it doesn’t hinder peoples’ ability to get fair hearings and trials.”

Over the last two weeks, justice system leaders, families, and advocacy groups have raised the alarm in response to the council’s earlier decisions to delay trials and extend key criminal court deadlines.

Late last month, the Judicial Council moved to extend the maximum time that people can sit in jail waiting for arraignment. Normally a person would go before a judge within 48 hours. Under the new rule, arrestees might wait as long as a week, not including weekends, for their first appearance before a judge. The council also extended deadlines for conducting trials. (This order will also last 90 days beyond the day CA officials lift the coronavirus emergency order.) And, on March 23, Cantil-Sakauye suspended jury trials for 60 days.

The purpose of these actions was to help court systems reduce backlogs caused by courthouse shutdowns, and to ensure that courts don’t contribute to the spread of coronavirus.

Yet a vocal group of critics, including the California Public Defenders’ Association, has fought back against the changes, which many argue will violate pretrial detainees’ rights as well as federal law, and could lead to overcrowding in jails, just as a handful of counties were making important gains in the effort to reduce jail populations to protect both inmates and staff.