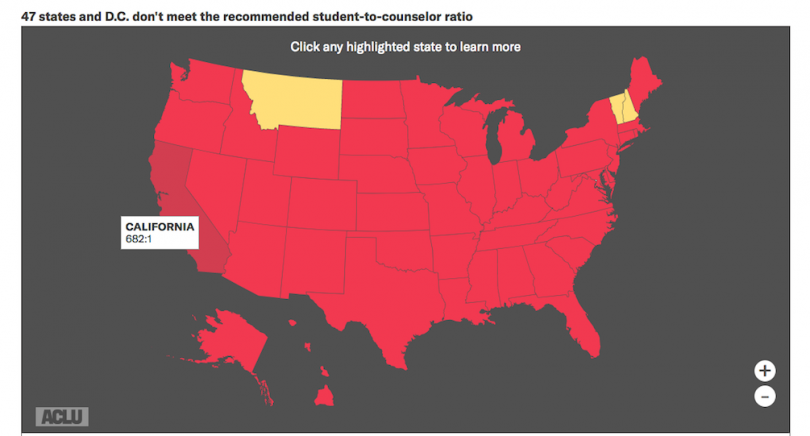 According to the School Social Work Association of America, schools should have a counselor-student ratio of one counselor for every 250 kids. Across the nation, however, each counselor serves an average of 444 students, according to a new ACLU report looking at data from the 2015-2016 school year.

In fact, fewer than 10 percent of students go to public schools that actually meet the SSWAA’s prescribed student-counselor ratio, according to the report, which the ACLU produced in partnership with the UCLA Civil Rights Project.

The national average of students per school psychologist is around 1,526:1.

In the schools that do have health and social services workers, those counselors and mental and physical health professionals are severely overworked, burdened by heavy caseloads.

“As the federal government considers further cuts to education funding, it should recognize that the harm will now fall in greater measure on communities of color, which have historically been underserved by school systems,” the ACLU says.

Last week, the Oakland school board voted to impose $20.2 million in budget cuts for the 2019-2020 school year, laying off more than 100 employees, including three counselors and five foster care case managers. Oakland Unified School District’s restorative justice program—long considered a model for the nation—also fell victim to the budget deal, slashed into a small fraction of the current 31-person team.

The $2.5 million-per-year program’s all-but elimination has elicited an outcry from youth advocates, parents, and even students, some of whom argued before the school board, asserting that the program is far more valuable to school climate than law enforcement presence.

“Oakland has been featured as a leader in this field and a model that other school districts need to consider when they are planning their own programs,” Michael Gilbert, co-founder of the National Association of Community and Restorative Justice. “This is very disappointing to hear–I think of all the sunk costs that went into creating such a robust and effective program.”

Research shows that having mental health and social workers present at schools improves attendance and academic achievement rates, while lowering suspensions and expulsions. At the same time, increasing police presence in schools has not been shown to measurably improve school safety.

In one report, an audit of the impact of North Carolina’s funding program for school resource officers (SROs) found that the middle schools using state money for school police “did not report reductions in serious incidents like assaults, homicide, bomb threats, possession and use of alcohol and drugs, or the possession of weapons,” the ACLU says.

Often, increased school police presence leads to the overcriminalization of kids—especially students of color—who make up a majority of the nation’s public school students—and those with disabilities.

Students lost more than 60,000 school years—more than 60 million hours—of instruction time due to suspensions during the 2015-2016 school year. Black students, not surprisingly, accounted for a disproportionate number of those suspensions. Nearly half of the missed hours, days, years, in California, for example, belonged to black students, despite the fact that CA enrolls nearly four times as many white kids as black kids.

Black girls, who make up just 16 percent of the national population of female students, but account for 39 percent of girls arrested on school property, according to the report.

Black and Latino boys with disabilities account for 3 percent of students, but 12 percent of school arrests.

Native American and Pacific Islander students, too, were more than twice as likely to be arrested as white students nationwide, according to the data.

Recently, data from the Trump Administration found that there were over 1 million “serious” student “offenses” during the 2015-2016 school year. The ACLU reviewed that data and found that more than 96 percent of those “serious” events involved fights and physical attacks, and threats without weapons. But only 3 percent of those offenses involved a weapon.

“How we prepare for and respond to children in need of support is a choice, and research is clear that providing more counselors is the best approach,” said Amir Whitaker, an attorney at the ACLU of Southern California. “There is no ‘crisis’ in student behavior, only a crisis of priorities leading to staff shortages and lack of resources for support. We can either provide evidence-based support for students or take overly punitive and police-heavy measures that have no demonstrable positive impact.”