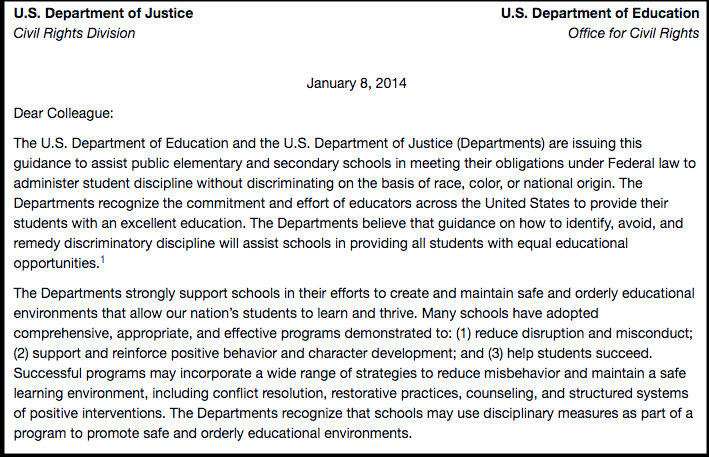 The Plight of the “Rethink Discipline” Guidance

In the weeks following the mass shooting at Marjory Stoneman Douglas High School in Parkland, FL, a string of conservative leaders have tried to cast blame for the massacre on “Rethink Discipline,” an Obama-era guidance issued as part of the My Brothers’ Keeper initiative. Civil rights organizations, in response, have banded together in support of the guidance, which was meant to help reduce rampant racial disparities in school discipline.

The 2014 guidance called on local school districts to analyze how their school discipline policies may be harming minority students, and work to implement alternatives to suspensions, expulsions, and referrals to law enforcement for low-level school infractions. The document advises schools to implement systems that monitor disciplinary actions, and ensure teachers and staff have proper training to administer school discipline “fairly and equitably” and/or are trained in “classroom management techniques and effective behavioral interventions that give them appropriate and culturally responsive tools to interpret and address the underlying behaviors.” Conservative critics of the guidance, including some teachers and parents, have argued that the policy could keep kids like Parkland shooter Nikolas Cruz in school, even if they have displayed violent behavior and may pose a serious risk to fellow students.

Opponents had been vocal about their mistrust of the guidance long before the mass shooting—so much so that last year, the US Department of Education officials met with proponents and opponents to discuss the guidance. But the debate over the document has escalated since the Parkland mass shooting on February 14.

On March 5, Senator Marco Rubio (R-FL) attacked the guidance in a letter to U.S. Education Secretary DeVos and U.S. Attorney General Jeff Sessions, saying that the document “discouraged schools from referring students to local law enforcement” and “encouraged schools to emphasize ‘constructive interventions’ over certain disciplinary actions.” The guidance, Rubio added, “allowed the Departments to initiate an investigation into schools and, if found to be noncompliant, could be at risk of losing federal funding.” The document “arguably made it easier for schools to not report students to law enforcement than deal with the potential consequences,” Rubio stated.

In 2013, Broward County, where Parkland is located, had a school discipline policy that focused on alternatives to law enforcement referrals in schools for non-violent behaviors, Education Week’s Evie Blad reported. The county also created a diversion program, PROMISE, that the Obama administration praised as a model for the nation when the administration was focused on addressing the issue of racial disparities in school discipline, according to Blad.

In response to allegations that Broward’s school discipline reforms had something to do with the Parkland shooting, Broward County Public Schools Superintendent Robert Runcie, on Twitter, said local officials would not “dismantle a program that’s been successful in the district because of false information that someone has put out there.”

“We will neither manage nor lead by rumors,” Runcie said.

So was there any credible connection?

A week after Rubio’s letter, on March 12, the White House announced a school safety plan focused on hardening schools in response to the Parkland massacre. The plan includes DOJ assistance programs to help arm teachers. The plan will also create a new Federal Commission on School Safety chaired by Secretary Betsy DeVos. That commission will consider a number of policy changes “for school violence prevention,” including a rollback of the Obama guidance on school discipline.

On Tuesday, during a congressional subcommittee hearing on law enforcement’s response to the Parkland shooting, Republican leaders again took aim at the guidance. The FBI, in response, said there was no connection between the directive and local and federal law enforcement agencies’ failure to prevent Nikolas Cruz from fatally shooting 17 people, despite numerous reports to the Broward County Sheriff’s Department and the FBI of Cruz’s violence and threats.

According to Eden, had the Broward County’s discipline policy not been in place, shooter Nikolas Cruz might have been arrested before violence erupted.

“My issue is that this policy of explicitly trying to push these [suspension and expulsion] numbers down can inhibit the good and fair judgment of school resource officers to issue arrests where they may be warranted,” Eden said. “And those arrests then feed into the system in a way that could have been constructive in this case.”

Yet, although law enforcement and others have now flagged a tragic number of opportunities missed to intervene with Cruz before his actions turned murderous, a lack of appropriate school discipline does not appear to be among them.

According to a statement from Superintendent Runcie, Cruz was never in the PROMISE program, and the Broward school district had no records of school infractions that Cruz committed that would have made him eligible.

Then, on Tuesday, FBI Deputy Director David Bowdich said that the guidance had nothing to do with the federal agency’s failure to respond to a number of tips it received about the school shooter. There was “no indication” that federal investigators considered the Obama document when responding to the Cruz tips, The 74 Million’s Mark Keierleber reports.

In response to the continued attack on the school discipline guidance, on Thursday, more than 150 organizations, including the ACLU, the Children’s Defense Fund, the Human Rights Campaign, the Juvenile Law Center, and the NAACP, signed a letter to Betsy DeVos urging her to “preserve” the document.

“The 2014 guidance clarifies that the U.S. Department of Education (ED) expects that schools and districts are treating all children fairly and provides practical tools and guidelines for educators to create safe, supportive, and welcoming environments for all students,” the local and national organizations wrote. “Rescinding the guidance would send the opposite message: that the Department does not care that schools are discriminating against children of color by disproportionately kicking them out of school and that the Department does not see itself as having a role in helping educators create and maintain safe schools that afford all students equal educational opportunities.”

Will a Rollback of the Guidance Affect California?

While dumping the guidance would not impact California’s state-level policies on school discipline, according to Amir Whitaker, who spoke to EdSource’s David Washburn, a repeal would send “the wrong message to schools” at the local level. “At the district level, and especially at the school level, we still see very harmful school climates and high suspension rates,” Whitaker said.

A recent study of race and school discipline in California counties revealed that the black male student suspension rate decreased 5 percent between the 2011-2012 and 2016-2017 school years—from 17.8 percent of all black boys to 12.8 percent. Racial disparities remain intact, however.

Black boys’ 12.8 percent suspension rate during the last school year was more than 3.5 times the rate of the CA public school population as a whole (3.6 percent), according to the report, which was created in collaboration between the Community College Equity Assessment Lab (CCEAL) at San Diego State University and the UCLA Black Male Institute.

And while Los Angeles and Oakland Unified School Districts have banned suspensions for “willful defiance”—a harmful catchall term for most anything that can pass as disruptive behavior, and is used disproportionately on students of color—since 2013, they are two of just a few districts that have taken this welcome step. (Both LA and Oakland have also undergone federal monitoring of discipline policies after data revealed their schools were disproportionately suspending students of color.)

And a statewide ban on suspensions in kindergarten through third grade for “willful defiance” is set to expire on July 1.

Senator Nancy Skinner has revived last year’s failed SB 607, which would keep the ban active and expand it to include children in every grade from K-12.

The original ban, AB 420, which Governor Jerry Brown signed in 2014, eliminated all willful defiance suspensions for children in grades K-3, but required review and renewal after 3.5 years. (Two years earlier, in 2012, Brown, advocating for local control, vetoed a bill that would have banned such suspensions in all grades.)

“There’s growing understanding that suspensions don’t improve behavior rather they sentence students to failure,” said Skinner. “SB 607 recognizes our job is to keep kids in school and help them succeed.”