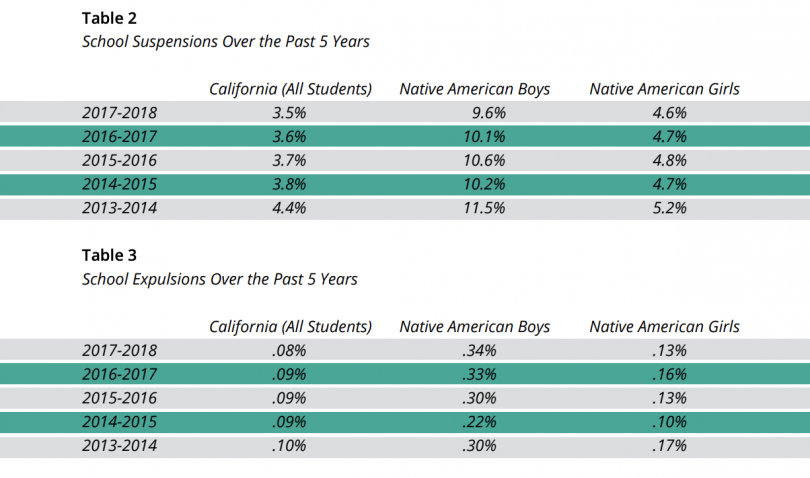 Research and the national conversation around racial disparities in school discipline have largely remained focused on the outsized disparate treatment that black students receive when compared with their white peers.

Yet Native American youth face much the same disciplinary treatment in schools that black students do, according to a report from San Diego State University and Sacramento Native American Higher Education Collaborative (SNAHEC) examining California school discipline data between 2013 and 2018.

In California, Native boys are expelled at the highest rate of any racial or gender group: a rate 4.2 times higher than the state average for all boys, according to the report. And the expulsion numbers for Native boys in K-12 have been ticking upward since the 2014-2015 school year.

Native American kids fared the worst with regard to school discipline in a handful of rural counties, the research showed. In Kings County, for example, NA boys were more than 40 times more likely to be expelled than the state average, while girls were 20 times more likely.

In Humboldt County’s Fortuna Union High school district, 71 percent of NA boys were suspended during the 2017-2018 year. And in the same county’s troubled Loleta Union Elementary, one out of every three Native girls received suspensions. (In fact, in 2013, the feds launched a civil rights investigation into Loleta’s alarming treatment of Native students.)

These two districts had just over 80 self-identified Native American students combined. That may not seem like a large enough population from which to draw conclusions, but the data paints a dire picture in other rural counties, too. Nine rural counties with a cumulative population of 2010 Native male students suspended over 15 percent of the group. The data shows that in rural schools “where these students may already feel isolated in terms of those who emanate from the same community, they are also targeted by educators,“ the report stated.

This latest SDSU report is part of a series that includes “Get Out! Black Male Suspensions in California Public Schools,” a report released in February 2018, which, similarly shows that despite reductions in suspension rates among black students, racial disparities remain embedded in the school discipline system.

A separate Harvard study published this past September found that students who attended “high-suspension” schools in Charlotte, North Carolina were more likely to be arrested and incarcerated later in life and less likely to enroll in and attend a four-year college, than their peers in other schools. Kids of color experienced the most pronounced negative consequences of prior suspensions.

All students who attended a high suspension-rate school were subject to negative impacts of harsh school discipline policies and practices, according to the report. “That suggests there are not overwhelmingly positive benefits of removing disruptive peers from the classroom,” said Andrew Bacher-Hicks, who co-authored the report with his Harvard colleague David Deming and the University of Colorado-Boulder’s Stephen Billings. Additionally, despite a redistricting in 2002 that moved 50 percent of kids to new schools, suspension rates remained relatively steady at individual schools. Thus, the researchers were able to determine that the suspensions were tied to school leadership and policy, rather than the student population.

The Harvard/UC-Boulder report called on schools to further reduce their reliance on exclusionary school discipline practices, and urged community groups and organizations seeking to address criminal justice system involvement and educational achievement gaps to focus their attention upstream — to the schools pulling kids out of classrooms as punishment.

And the SDSU report authors recommended school districts partner with local tribes to implement cultural training to help school administrators and teachers to understand the needs of Native students. Additionally, the report calls on schools to include Native students, themselves, in the conversation about how to reduce disparities school policies so that more kids of color remain in classrooms whenever possible.