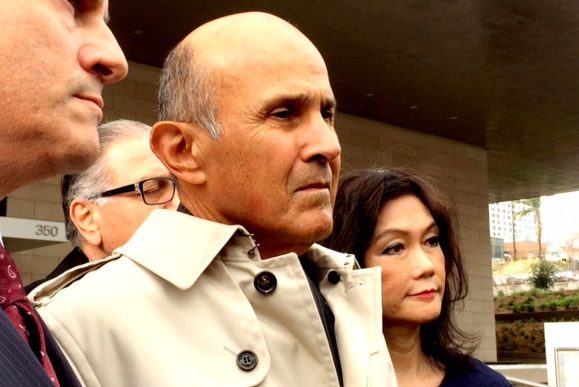 Government prosecutors announced Tuesday that they would retry former Los Angeles County sheriff Lee Baca on counts of obstruction of justice and conspiracy to obstruct justice. These were the charges that were tried this past December and resulted in a hung jury and mistrial just before Christmas, with 11 jurors voting to acquit. Only a single juror held out for conviction.

Lead prosecutor Brandon Fox announced the government’s decision in a Tuesday morning hearing in the courtroom of U.S. District Judge Percy Anderson. Fox said the government also intends to try Baca at the same time on a third count of lying to federal officials. The charge of lying to the feds was previously scheduled to be tried separately.

Opening statements in this new trial are scheduled for February 21, 2017.

ANOTHER TUG OF WAR WITH PRE-TRIAL MOTIONS

Both the defense and the prosecution indicated their intent to file motions to shape aspects of the scheduled February trial to their individual advantage.

The government, for example, intends to try to exclude UCLA psychiatrist Dr. James Spar, a witness for the defense who will introduce the idea that the former sheriff’s cognitive ability was impaired by Alzheimer’s disease in the spring of 2013 when he was questioned for four-and-a half hours by federal officials, at which time he allegedly lied to them regarding his involvement with the events in August and September 2011, which are the basis of the obstruction of justice charges.

Baca was first officially diagnosed as having some kind of cognitive impairments, on May 13, 2014. According to the defense, Dr. Spar would testify to the probability that, at the time he was interviewed by the feds, Mr. Baca was in the “pre-clinical stage” of Alzheimer’s, which Spar contends “can occur 10 years or more before the onset of clinical symptoms.” Or alternately, Baca, according to Spar, could have been in the Mild Clinical Impairment” or MCI stage of Alzheimer’s in the spring of 2013.

Thus, if Dr. Spar is allowed to testify, he will reportedly suggest that Baca’s not yet diagnosed early stage Alzheimer’s disease likely compromised the former sheriff’s answers to the government’s questions in April 2013.

Prosecutor Fox also indicated that the government intends to file a motion asking that the former sheriff be precluded from wearing a lapel pin the shape of the Los Angeles Sheriff’s Department star, a non-official, quarter-sized pin that Baca has worn to every trial day and hearing.

For its part, the defense, led by attorney Nathan Hochman, objected to the government wanting to un-severe the obstruction counts, from the third count of false statements, thereby stitching the two trials back into one. “It shows bad faith,” Hochman said. Judge Anderson ruled in the prosecution’s favor.

Most interesting, however, was Hochman’s announcement that he might file a motion claiming that the retrial on the two obstruction of justice charges constitutes double jeopardy.

Hochman did not explain much about his thinking to the judge. That will be outlined in the defense’s motion. But former government prosecutor, Miriam Krinsky, hazarded some guesses. (Krinsky was also the executive director for the Citizen’s Commission on Jail Violence.)

“Double jeopardy means that you can’t twice put a person [legally] at risk” for alleged criminal conduct, Krinsky said. If you’ve tried once and the individual has not been found guilty, “you can’t go back to the well.” You don’t get a do-over.

But that principle, said Krinsky, “has never been applied to a hung jury.” The defense is likely going to argue, she said, “that this really shouldn’t be viewed as a hung jury,” that the jury would have found Lee Baca not guilty “had the court not interfered in that process”—namely by declaring a mistrial.

“That would be an unprecedented argument to see prevail,” said Krinsky. She’s never heard of such an argument carrying the day, she said—“meaning that the government” would not be allowed “to go back and try to convince the next jury that a final verdict should be reached in this case.”

(We’ll let you know what the defense argues when the motion is filed.)

Having come mighty close to an acquittal once, most agree that the prosecution faces some interesting challenges a second time around—although it is possible the government may be helped by the presence in the retrial of the third charge of lying to federal officials, which suggests Baca might not have been as “open and transparent” as the defense successfully suggested back in December.

But there is also the matter of the former sheriff’s Alzheimer’s diagnosis, which is likely to, understandably, draw sympathy, which in turn presents yet another set of challenges for the prosecutors.

The prosecution, said Miriam Krinsky, “will have to show that [Baca] was trying throughout to circle the wagons” to keep the government from learning what had gone on in the county jails, “and what had gone wrong in his department.

“There’s no dispute about what happened. The question is why did it happen?” Krinksky said. Were the actions simply to get to the bottom of the matter of an illegal cell phone in the jail? “Or were they to obstruct justice?”