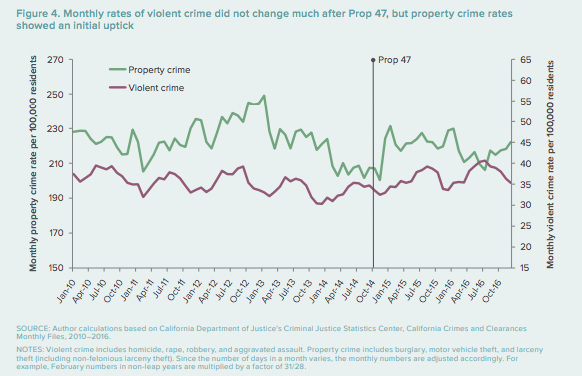 While California crime rates remain at historic lows, voter-approved Proposition 47 appears to have led to an increase in certain property crimes, according to a new Public Policy Institute of California report that aims to shed some light on the effects of the measure–an ongoing, contentious point of debate in the state.

While researchers found what appeared to be a correlation between Prop. 47 and upticks in larceny, the measure did not make a measurable contribution to the state’s increase in violent crime. Moreover, Prop. 47 appears to have contributed to a reduction in recidivism in California, while also lowering the prison and jail populations.

Background on the Sentencing Reform Measure

“When voters overwhelmingly approved Proposition 47, it was urgent that California address bloated and costly prisons and invest taxpayer money more effectively to stop the cycle of crime,” said Lenore Anderson, founder of Californians for Safety and Justice, and co-author of Prop. 47.

In June 2017, the state portioned out chunks of the $103 million in savings to 23 California cities and counties to spend on community programs focused on reducing recidivism.

“While it is too early to know if this shift in funding has affected recidivism rates,” the report said, “in the coming years the state and counties will be better able to assess the impact of increased interventions and to identify promising strategies.”

What the Data Indicates

Researchers found that recidivism rates for the affected crimes did drop after the passage of Prop. 47, but pinpointing why the numbers dropped is complicated. Sampling data from 12 counties, researchers calculated that all crime offenders were rearrested at a rate of 70.8 percent—1.8 percent lower than for their peers released prior to Prop. 47’s implementation.

The two-year rearrest rate for people convicted of Prop. 47 crimes, however, dropped from 45.3 percent before Prop. 47, to 35 percent after the measure was passed.

The drop in rearrests for all crimes was primarily due to a reduction in “rearrests for Prop 47 drug offenses,” the report stated.

Researchers believe that this contrast is due to reduced enforcement of Prop. 47 offenses, because “law enforcement has more flexibility in responding to drug offenses than property offenses.”

The numbers also dropped for reconviction rates as well as rearrests.

The post-Prop. 47 two-year reconviction rate for all crimes was 46 percent—3.1 percent lower than before Prop. 47’s sentencing changes.

When researchers narrowed the data down to Prop. 47 offenses, the two-year reconviction rates dropped even further—from 25.4 to 14.1 percent.

The differences may be due to less street-level enforcement by law enforcement officers, according to the report, as well as “changes in underlying offender behavior.” The report also suggested that “lower charging rates among district attorneys and/or less willingness to accept plea deals among public defenders,” may factor into the reconviction rate disparity.

In 2015, the first year that Prop. 47’s sentencing reductions were in effect, prison and jail populations also dropped significantly. PPIC attributes much of the drop to Prop. 47, although other federal court-ordered prison population reduction strategies played a role.

The state’s prison population declined by 8,100 inmates (6 percent) in 2015. The California Legislative Analyst’s Office estimated that Prop. 47 was responsible for 4,700 of 8,100-person drop.

Additionally, there were approximately 7,000 fewer inmates in county jails in 2015.

The data shows that officers arrested fewer people overall after Prop. 47, but also conducted more “cite and releases,” in which a person is arrested, given a citation, and then released, rather than taken to jail.

Researchers also looked at the Prop. 47’s impact on California’s crime rates, which, the report points out, remained at historic lows between 2014 and 2016.

According to the report, Prop. 47 was not a factor in the state’s violent crime rates, which increased 13 percent between 2014 and 2016. “This trend appears to have preceded the reform,” the researchers said.

PPIC attributes much of the spike in violent crime to “unrelated changes in crime reporting after 2014.”

In 2014, the FBI expanded the list of crimes that constitute rape, increasing the reported rapes by 38 percent, and the violent crime rate from what would have been a 10.7 percent increase, to a 13 percent increase over the previous year.

Additionally, an investigation by the LA Times’ Joel Rubin and Ben Poston found that the LAPD mislabeled close to 1,200 violent crimes as minor offenses, significantly altering the city’s crime statistics. The reporters found that “with the incidents counted correctly, violent crime in the city was 7 percent higher than the LAPD reported in the period from 2005 to fall 2012, and the number of serious assaults was 16 percent higher.”

After the story broke, the LAPD announced that it would implement crime reporting reforms.

LA’s Inspector General audited the department’s crime stats in 2015, and found that the aggravated assault rates between 2008 and 2014 would have been approximately 36 percent higher each year, had the department properly classified the crimes. “The statewide increase in the violent crime rate between 2014 and 2016 was 13 percent,” the report said. “This drops to 6.4 percent when Los Angeles is excluded. When we account for both the definitional change in rape and exclude Los Angeles, the increase drops to 4.7 percent. With these two adjustments, the violent crime rate in 2016 is lower than it was in all other years since 2010, with the exception of 2014.”

The Connection Between Prop. 47 and Larceny

PPIC’s research did find a connection between the state’s increase in larceny crimes and Prop. 47, however.

Auto theft rates and burglaries, both attributed by critics to Prop. 47 were comparable to other states, the researchers found. But the increase in larceny rates when compared to other states was “marginally statistically significant,” according to the report. “We estimate that Prop 47 led to a rise in the larceny theft rate of about 135 per 100,000 residents, an increase of close to 9 percent compared to the 2014 rate,” researchers said. Anderson, founder of Californians for Safety and Justice, said reduced recidivism and prison and jail populations, in combination with historically low crime rates and reinvestment in anti-recidivism programs, shows that Prop. 47 is helping to “rebalance” the state’s investments in public safety.

“Despite this progress, we still have a long way to go,” Anderson said. “California still spends more than $11 billion a year on state prisons – more than the general fund budgets of the University of California and California State University systems combined. And many local safety strategies still lack adequate support and need to be expanded, such as diversion, crisis response and housing.”

It’s time, said Anderson, to take rebalancing spending on the criminal justice system “to the next level.”