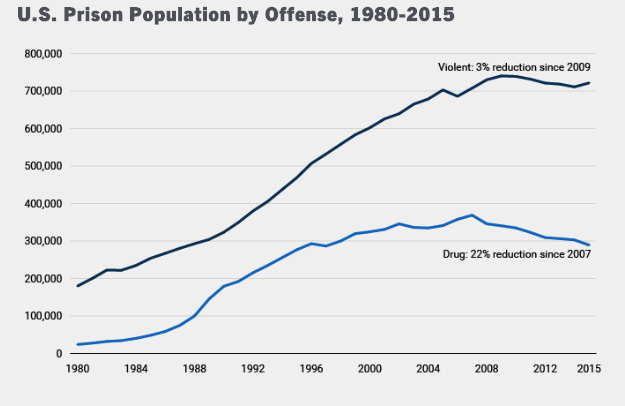 While the First Step Act and a handful of legislative changes at the state level have furthered the bipartisan effort to reduce the number of people imprisoned for drug-related crimes over the last decade, the nation must move on to the “next steps” to combat mass incarceration — ending “excessive” punishments for violent crimes, according to a new report from Dr. Nazgol Ghandnoosh, a senior research analyst at The Sentencing Project.

Reforms meant to reverse some of the damage done by the War on Drugs effectively reduced the number of people incarcerated for drug crimes by 22 percent between 2007 and 2015.

Nearly half of the nation’s prison population is made up of people serving time for violent offenses, including murder, assault, robbery, and rape. (Yet, Vice and The Marshall Project report that in certain states, some crimes classified as violent are actually non-violent, like embezzelment, possessing large amounts of marijuana, attempted suicide, entering a house that’s not yours, and illegal gun possession.)

“Prison terms have grown longer for this population despite evidence that long sentences: 1) incapacitate people in old age when they no longer pose a public safety threat, 2) have limited deterrent value since people who commit crimes do not expect to be caught, and 3) detract from more effective investments in public safety,” the report states. “These investments include expanding health insurance coverage to prevent and treat substance use disorder, expanding enrollment in high-quality early education to improve young people’s educational prospects, and promoting residential mobility programs to reduce neighborhood segregation.”

The report points to specific reforms in 19 states, as well as several federal reforms, that can serve as models for the nation.

In California, for example, a new law has severely restricted the scope of the state’s “felony murder rule.”

Prior to 2019, under California’s felony murder rule, individuals involved in serious crimes that resulted in someone’s death faced murder charges as if they were the killer, even if they had no intent or knowledge that a person would be injured or killed, or that a weapon was present.

Under the new law, SB 1437, only individuals who actually kill, who intend to kill, aid the actual murderer, or who show “reckless indifference to human life” during the course of committing a serious felony that results in murder will face murder charges. (There’s one major caveat, however. If the victim is a law enforcement officer, the old felony murder rule still applies.)

Many states have raised the age of juvenile court jurisdictions to keep more kids out of the adult court system, where they face longer sentences for the same crimes.

In 2013, former Governor Jerry Brown signed SB 260, a law that gave a second chance at parole to kids who committed murder before the age of 18 and were sentenced to life-without-parole. In 2015, a follow-up bill SB 261, expanded the age of eligibility for early parole hearings to include lifers whose crimes were committed before the age of 23. The state raised the age further–to 26–in 2018, with AB 1308.

Brown also commuted the sentences of 284 people during his final year in office, some of which were life sentences for people who were ineligible for parole consideration.

These and other efforts to reduce penalties for violent offenses offer models that should be further built on to reduce the nation’s reliance on incarceration.