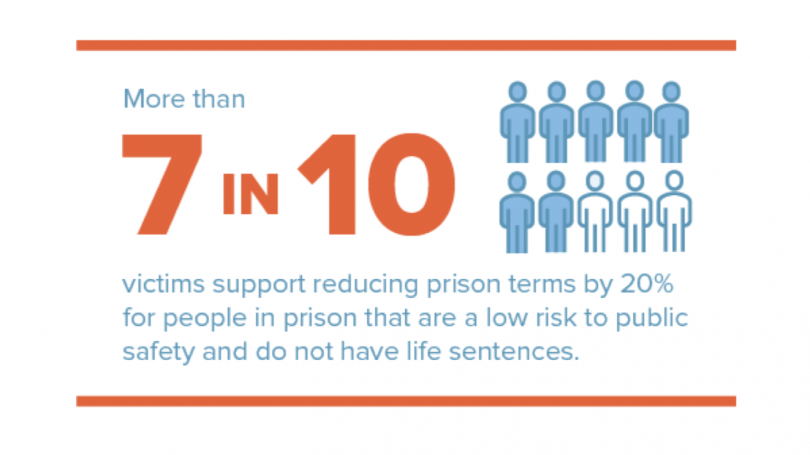 The majority of California’s victims of crime support criminal justice reforms, including shorter sentences, and increased spending on prevention and rehabilitation services in the community, according to a survey commissioned by Californians for Safety and Justice.

One in three survey participants said that they had been the victim of a crime in the last decade. Less than one out of every five of those survivors said they received services meant to help someone heal from the trauma of victimization, including medical and financial assistance, counseling, and other services.

The overwhelming majority of crime victims do not seek harsher punishments for crimes, but instead, want to see the criminal justice system reformed to further reduce the state’s reliance (and spending) on incarceration.

Over three-quarters of crime survivors favored the idea of placing people into halfway houses with reentry services for the final two years of their prison sentences.

Those surveyed also preferred, by a two-to-one margin, that judges–rather than mandatory minimums–should determine the sentence length for violent crimes. Those judges, the crime survivors said, should weigh individual circumstances and best practices in selecting individuals’ sentence lengths.

Overall, sentence lengths should be reduced by 20 percent for people whom judges have found to be a low risk to public safety, and who are not serving life sentences, according to three out of four survey respondents. And the savings gleaned from reducing prison stays (and thus, prison populations) should be used to further crime prevention efforts and rehabilitative services.

More than 80 percent of victims told CSJ that they support using 10 percent of California’s $12 billion corrections budget to mental health and substance use treatment and trauma-focused services.

Californians for Safety and Justice says it commissioned the crime victim survey to “help policymakers better understand who crime victims are, what their experiences are with the criminal justice system, and their views on public policy.”

The respondents’ answers “paint a different picture than some common assumptions about victims, their views and what they want from the criminal justice system,” the report states.

“We know from the voices of diverse crime survivors that, historically, the public policy conversations about community safety and crime victims have been misguided,” said Lenore Anderson, Co-Founder of Crime Survivors for Safety and Justice and President of Californians for Safety and Justice. “While incarceration has been touted in the name of victims, when you actually listen to survivors, they make clear that excessive incarceration is not what they want or need. It’s time we listen to survivors to ensure they get what they need and help influence policies that can make our communities safer.”