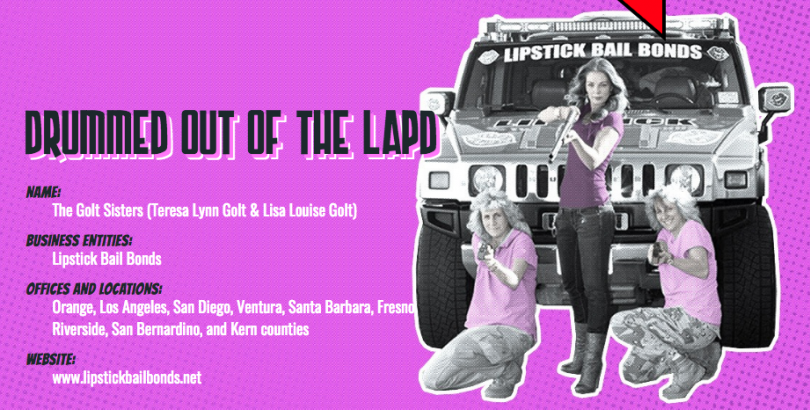 As California lawmakers and state officials move toward reforming the cash bail industry via SB 10, a statewide coalition of social justice, labor, business, and faith-based organizations, called Bail Reform California, has launched a website training a spotlight on corruption and other abuses by agents of the bail industry–an industry which purports to defend public safety.

The site, BondsmenAndBountyHunters.com, profiles badly behaving bail bondsmen and largely unregulated bounty hunters in California, including Shawn Allen “Frosty” Rapoza, the former owner of Sacramento’s Ace Deuce Bail Bonds, who posted a pretrial defendant’s bail. Rapoza allegedly accepted stolen assault weapons as payment from his client. The bail bondsman was charged with two counts of possession and two counts of transportation of assault weapons, and with possessing firearms with a prior felony conviction. When police searched the company and Rapoza’s house, they found a dozen weapons and a meth stash.

And then there is Lipstick Bail Bonds, but we’ll get back to them in a minute.

Nationally, rapidly expanding jail populations can be attributed, in part, to a growing reliance on pre-trial detention, according to a May 2017 report from the non-profit Prison Policy Initiative.

In California and across the nation, cash bail has a disproportionately negative impact on poor and minority Americans. The system allows wealthy defendants to go free while indigent defendants who can’t afford bail remain behind bars awaiting trial.

In LA, nearly half of the county’s jail inmates are being held while they await trial—usually because of an inability to post bail.

And between May 2016 and May 2017, defendants in LA County paid approximately $173 million in non-refundable cash to bail bondsmen, and $13.6 million directly to the courts, according to a report commissioned by CA Chief Justice Tani Cantil-Sakauye. In December 2017, a report from UCLA’s Million Dollar Hoods research team revealed that between 2012 and 2016, $19.4 billion in cash bail was levied against people arrested by the LAPD. Homeless people in the City of LA were hit with a total of just under $4 billion in bail.

In San Francisco, residents pay $15 million in non-refundable bail fees each year—$9 million of which comes from families of color.

And in San Joaquin County, in 5 months during 2016, just under 200 people paid bondsmen to gain their freedom in cases where charges were ultimately dropped, according to Bail Reform California.

The state’s proposed bail reform bill, SB 10, aims to ensure that no one gets stuck behind bars while awaiting trial just because they cannot afford to post bail. The bill would require courts to employ pretrial risk assessment to help judges determine whether a person poses a public safety or flight risk. It would also require counties to employ pretrial services that, among other things, help defendants make their court appearances.

The bill has faced heavy opposition from lobbying bail bondsmen and the insurance companies that back the bondsmen—and even Duane Chapman, better known as “Dog the Bounty Hunter.”

“For far too long, California’s broken money bail system has enabled a bail industry and bail bondsmen and bounty hunters that play by their own rules and mistreat Californians all in pursuit of a buck,” said Natasha Minsker, the ACLU of California Center for Advocacy & Policy director and member of the Bail Reform California coalition. “It’s time to shine a light on California’s broken money bail system. These profiles of abuse make clear that the status quo is not working and is not keeping us safe.”

The website tells the story of two sisters, who operate their bail company, Lipstick Bail Bonds, in nine Southern California counties, and who have been particularly vocal in their fight to protect the bail industry. According to the website, Teresa Lynn Golt and Lisa Louise Golt were drummed out of the LAPD, and were charged with using their status as police officers for personal financial gain. The Golts were charged with felonies for issuing “bail without a license and illegally accessed confidential information from law enforcement computers,” according to the LA Times.

The LAPD fired Lisa in 1999 for operating the bail company as an off-duty police officer, as well as for pepper spraying someone while off-duty, the LA Times reported in 2000. Her sister, Teresa, was one of two officers named in a civil rights lawsuit alleging that police misconduct led to the death of an 81-year-old Korean immigrant.

Through Lipstick Bail Bonds, the Golt sisters have worked “to cover the ugliness of California’s broken money bail system with pink lipstick, pink pepper spray, and pink stun guns,” according to BondsmenAndBountyHunters.com.

In 2013, the duo burst into a Huntington Beach Arby’s to arrest a man, pepper spraying him, and shooting him with a Taser and rubber bullets.

“Despite an obligation to follow the law, public records are rife with examples of bail bondsmen and bounty hunters openly flouting it,” the website states. “It’s common for them to forcibly enter homes, harass innocent residents, impersonate law enforcement personnel, and threaten people with guns and Tasers.”

BondsmenAndBountyHunters.com also details some particularly troubling stories of “fugitive recovery” in California. One bail executive, Fausto Atilano, Jr. and/or his employees have broken into their targets’ homes (and, one time, broken into the wrong home), pointed firearms at innocent people, and shocked a mayor’s daughter with a Taser.

“These alleged instances show bail bondsmen like Atilano serve no public safety function under California’s current, broken, “money bail” system,” according to Bail Reform California. “To the contrary, it would seem that the bondsmen and bounty hunters associated with Fausto’s Bail Bonds seem to leave a long trail of traumatized residents and broken down front doors in their wake, all in pursuit of their bottom line.”