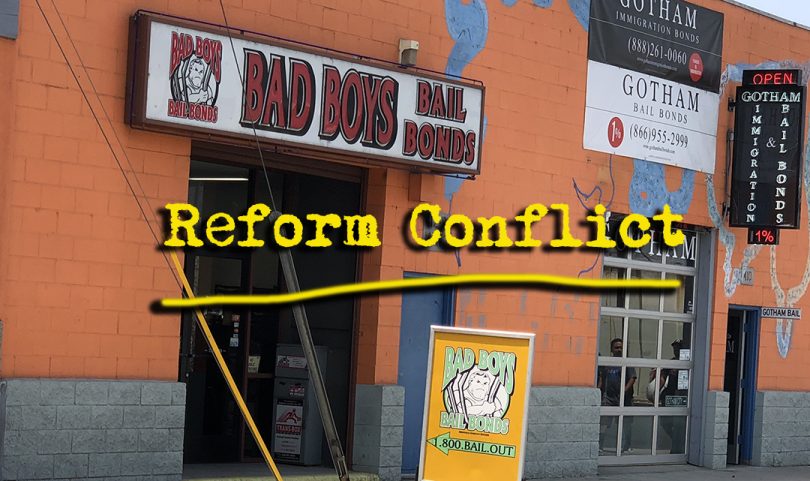 UPDATE:  On Tuesday, August 21, the California senate passed SB 10 in a 26-12 vote.  The bill is now headed to Governor Jerry Brown’s desk.

Before the vote, Senator Holly Mitchell (D-Los Angeles) read a lengthy statement explaining why she was voting for for the bill.  The statement seemed, to a great degree, aimed at that justice advocates who had recently bailed on the proposed legislation.

“Today, the legislature took an important step forward in reducing the inequities that have long plagued California’s bail system,” the governor said in a statement.

On Monday, Senate Bill 10, the much labored over bail reform legislation, passed through the California State Assembly in a 41-27 vote, which means it now goes on to the Senate. But, on the day of its passage, the high-profile bill suddenly faced very vocal opposition from some of its biggest and earliest supporters.

Certain justice advocacy groups began to peal off on Thursday, after the bill’s author, State Senator Robert Hertzberg (D-Van Nuys) unveiled amendments to the legislation, which he introduced in 2016, and has worked on ever since.

On Thursday, while the ACLU didn’t oppose the bill, it went from strong support to neutral in the face of Herzberg’s amendments.

“Since the introduction of SB 10 in December 2016, the ACLU has worked alongside a coalition of criminal justice, labor, faith, attorney and community organizations, as well as Senator Hertzberg, to replace the current money bail system with one that safely and substantially reduces the number of people in jail pretrial, addresses racial bias and disparity in pretrial decision-making, and ensures justice and fairness in the pretrial process,” wrote Natasha Minsker, Director of the ACLU of California Center for Advocacy and Policy, on Thursday.

Over the weekend, however, a closer look at the changes appeared to shatter the ACLU’s neutrality.  On Monday, the Executive Directors of the various ACLU California affiliates announced that the chapters had moved their position to “oppose,” on the bill they had helped craft.

“We oppose the bill,” they wrote in part, “because it seeks to replace the current deeply-flawed system with an overly broad presumption of preventative detention. This falls short of critical bail reform goals and compromises our fundamental values of due process and racial justice.”

The new statement was signed by ACLU directors Hector Villagra in Southern California, Norma Chávez Peterson, of San Diego and Imperial Counties, and Abdi Soltani of the Northern California chapter.

The newly amended bill also generated its own local tweet storm over the last few days, particularly on Monday.

Laura Pitter, the interim Deputy Director of the US Program at Human Rights Watch, tweeted her dismay at the turn of events. “California’s attempt at bail reform #SB10 ‘replaces money bail with a system that is likely to incarcerate more people, uses racially biased risk assessments, and gives judges nearly unlimited discretion to lock people up…'”

“Regardless of how you feel about the substantially revised #SB10,” tweeted Scott Graves, director of Research for the California Budget & Policy Center, before the vote.  “….it’s being debated on the Assembly floor without the benefit of a legislative analysis. At this point, no analysis of the new text is available to the public.”

The more than 20 justice advocate groups, that opposed the bill by Monday,  said, in essence, that they felt that the new version gives judges “unchecked discretion” to detain people with no due process, by replacing the presumption of money bail, with a practice called preventative detention that will, they said, create a “presumption of detention” where defendants, especially poor defendants of color, would still end up being locked up if, unfairly or not, a judge decides they are a danger to the community and should be held without the possibility of release, meaning that now even the option to somehow raise the money to pay a high bail will vanish for certain people.

Giving jittery judges too much power?

As Erwin Chemerinsky put it in an Op-Ed for the Sacramento Bee, “Although I strongly support eliminating money bail and urged passage of SB 10, the recent amendments to the bill could lead to the detention of more people, and likely will exacerbate racial injustices.”

Chemerinsky, who is both dean and professor of law at the UC Berkeley School of Law, wrote that the key problem with the revised version, which was clearly tinkered with in the hope of bringing more law enforcement on board, is that there is “no criteria for how risk is to be determined.” Instead, the bill, he points out, leaves this to each separate locality, and ultimately “gives judges total discretion to decide whether to release an individual and on what conditions. The new version, also allows prosecutors to file for this “’preventive detention,'” which blocks “the defendant’s release pending a trial.”

One of the factors that has created such an awful, unjust morass with money bail, according to Chemerinsky, is that absent any system by which to determine risk, “judges often will over-predict dangerousness.”

Judges don’t want to make a mistake, and have someone they released commit a serious crime, causing them to be severely criticized, or worse, maybe recalled, or defeated in the next election.

“But keeping a person in custody never risks such consequences for a judge.”

Yet, despite the criticism that followed, last week, Hertzberg was upbeat when he unveiled the changes to the bill.

“Since we introduced this bill nearly two years ago,” he said, “I have lived and breathed bail reform. Currently, we have a system that punishes people and takes away their liberty, simply because they have less money. That’s not fair, and it’s not protecting public safety. The point of this bill is to treat people as people, and to consider their public safety risk and their flight risk on an individual basis.”

The bill’s lead joint author in the Assembly, Rob Bonta, D-Oakland, was unambiguously thrilled with the bill’s passage, despite the fact that some of his colleagues said in so many words to reporters,  “Hey, it’s not perfect but it’s better than nothin'”

Monday’s vote was “a clear victory for justice, fairness, and safety,” Bonta said in his post-passage statement. “We are now a giant step closer to becoming the first state in the nation to abolish the fundamentally broken for-profit, predatory money bail system. For too long, our criminal justice system has treated those who are guilty and rich better than those who are poor and innocent. No more.”

In the Senate, Hertzberg will have to face the highly vocal and well-financed opposition of the money bail industry. And now he will also have to deal with the bill’s newly disaffected former sponsors.

Perhaps with the latter reason in mind, after the assembly vote, Hertzberg released a statement that evoked Jewish tradition, which sounded very much like a nod to the justice advocates. “Pirkei Avot teaches us,” he wrote, “‘You are not obligated to complete the task, but neither are you free to desist from it.’ The California Legislature,” Hertzberg continued, “will continue to examine bail reform…”

In other words, don’t let the perfect become the enemy of the good.

Reportedly, Brown supports the new version, as does democratic frontrunner in the race for governor, Lt. Governor Gavin Newsom.

The Chief Justice of the California Supreme Court, Tani Cantil-Sakauye, an early supporter of bail reform, also supports SB 10 as it stands.

The Senate has two weeks to decide whether to send SB 10 to Gov. Jerry Brown’s desk for a signature.  So…watch this space.