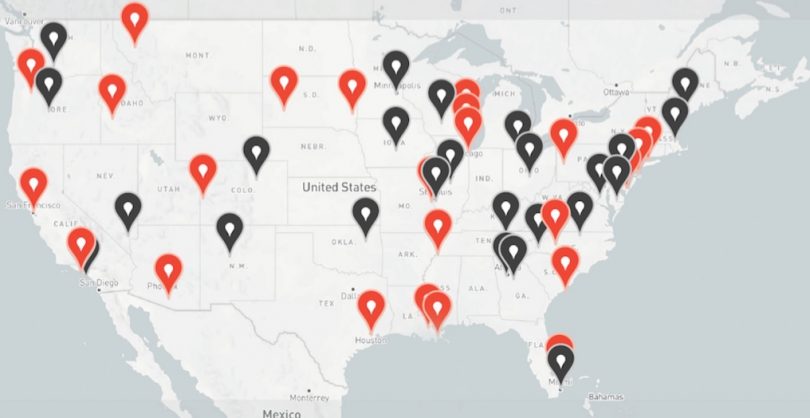 On Tuesday, the John D. and Catherine T. MacArthur Foundation announced $22 million in new grants to jurisdictions across the nation, as part of the foundation’s Safety and Justice Challenge, which aims to “create fairer, more effective local justice systems across the country” by changing the way America thinks about and uses (overuses) jails.

San Francisco, along with 12 other current Challenge sites, will receive additional funding to continue their efforts to reform their justice systems. The grants ranged from $350,000 to $4 million. SF landed in the middle of the pack, receiving $2 million.

The city/county will use the money to further its goal of reducing the local jail population by 16 percent over two years. Local officials hope to eliminate the need to replace a seismically unsound jail facility.

“We cannot rely on 20th century tools to address 21st century problems,” said District Attorney George Gascón. “From the streets to our jails, the way San Francisco has responded to the growing epidemic of mental illness and substance abuse is not yielding the results that the community deserves. It’s been three years since the city rejected a proposal to build a new jail; it’s long past time to embrace the science, the research, and a new paradigm.”

San Francisco will use the $2 million to increase pre-arrest and pre-trial diversion strategies, to “root out” racial disparities and bias in the criminal justice system, and to boost services offered to people with mental illness or substance use issues in the system. The money will also go toward sentencing and corrections strategies that prioritize rehabilitation and recidivism-reduction. Additionally, SF hopes to reduce the time it takes to process cases.

In SF, “only those offenders who commit more serious crimes are in custody long enough to receive a referral to an inpatient treatment facility,” according to DA Gascón’s office. “This is because justice-involved individuals with mental illness are de-prioritized, resulting in a 120-day average wait for a bed in a community-based residential treatment program. The result is that individuals with mental illness deteriorate in our jails just to be released to our streets without having been treated and in worse condition.” The inefficiency fuels recidivism, and is “the reason that our jail remains San Francisco’s largest behavioral health facility,” the DA’s Office said.

Long Beach, CA was selected as part of a fresh, mini round of $50,000 grants. The city aims to use the money to establish a “Connection to Care” (C2C) program to link people who cycle in and out of jail to community-based services. Long Beach officials will also launch a data-sharing system between the city, and county and community partners that will help track C2C outcomes “and promote data-driven decision-making.”

“There is growing demand for criminal justice reform across the country, and local jurisdictions are leading the way,” said Laurie Garduque, MacArthur’s Director of Justice Reform. “MacArthur is increasing our investment because we are seeing promising results and an appetite for more reform as evidenced by the diversity and creativity of the solutions implemented and tested across the Network. While progress is not always easy, and there is no single solution or quick fix, these jurisdictions are proving it is possible to rethink local justice systems from the ground up with forward-looking, smart solutions.”

Los Angeles County was one of the original 20 jurisdictions chosen as a challenge site in 2015, but did not make it to the second round of full mentoring and funding in 2016. The MacArthur Foundation did not go away, however, choosing instead to keep encouraging the sites that failed to make the cut. In 2017, MacArthur tapped an additional 8 municipalities, including LA County, to again receive justice system reform assistance, including $350,000. The foundation’s grant money and expert help were directed at restorative justice-focused diversion, as well as the LA County Sheriff’s Mental Evaluation Teams, which respond to mental health crises and help divert mentally ill individuals away from jails and into community services. The funding and guidance also went toward reforming the cash bail system by expanding the county’s pretrial release through risk assessment.