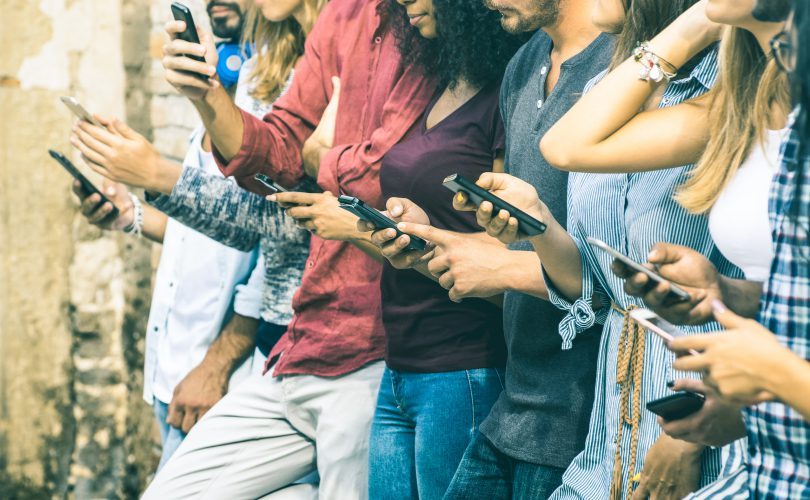 Los Angeles foster youth between the ages of 13 and 26, which includes vulnerable “aged-out” foster youth. will likely soon get free smartphones with free unlimited voice, text, data, and a hotspot for internet access.

According to the national nonprofit iFoster, the majority of the nation’s foster youth — along with those “transition age” youth, who reached legal adulthood in the foster care system — lack consistent access to cell phones, laptops, and other devices. As a result, these young people, who are already struggling with the trauma and insecurities that come with being in the child welfare system, can find themselves painfully disconnected from other kids, and from the world at large.

This disconnection, according to iFoster and other youth advocates, has major “safety, social, educational and employment implications.”

With all this in mind, in late April of this year, The California Public Utilities Commission voted to allocate $22 million to an important pilot program that will provide smartphones to more than 30,000 of the state’s eligible foster kids, along with young adults who have “matured out” of the child welfare system. 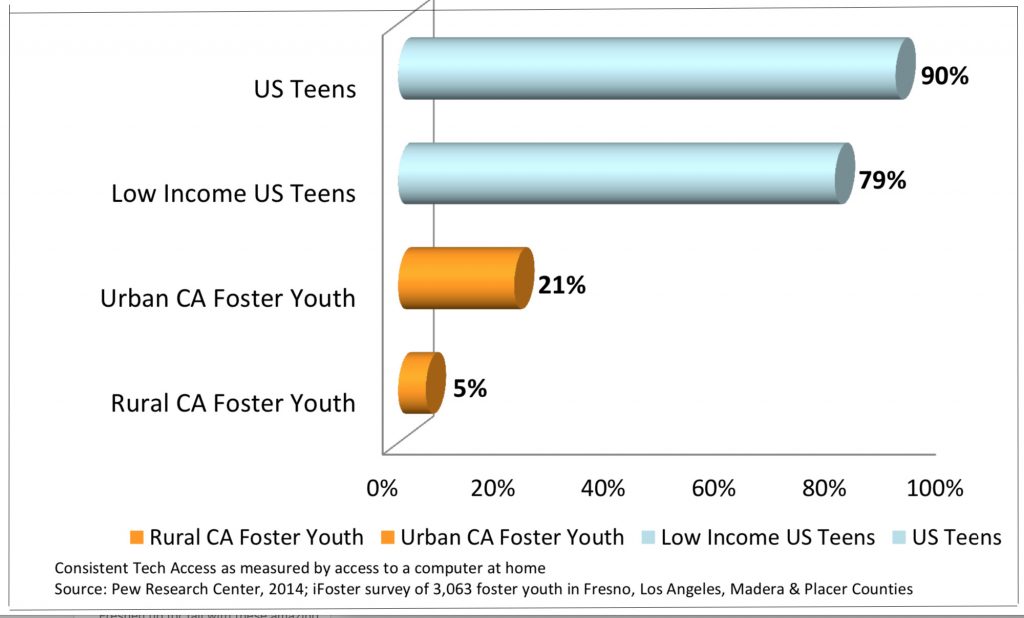 The issue got on the radar of the state’s Public Utilities Commission primarily because iFoster — which works to get foster kids various kinds of resources and opportunities they need and too often don’t have — had been bugging the commission since 2013 about the myriad barriers that foster kids face as they try to keep up in school, and in other areas of their lives.

Some of those most crucial of those barriers, iFoster explained to the PUC, are technological, particularly the lack of smartphones and consistent internet access.

The case was made stronger when, between 2016 and 2017, iFoster conducted a survey of 3,063 foster youth in Fresno, Los Angeles, Madera, and Placer counties, and found that only about 21% of urban foster youth and 5% of rural foster youth had regular access to technology.

“This has a lifelong impact on their ability to succeed in school, find employment, connect with their support network and build the skills they need to achieve their potential,” said Serita Cox, iFoster’s Co-Founder and CEO. 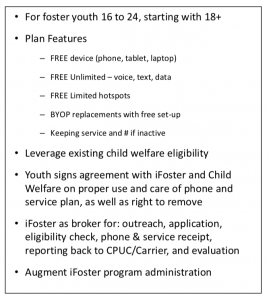 What the youth will receive during the 2-year pilot

According to what iFoster found, smartphone ownership would help bridge the digital gap that foster youth feel every day when among their non-fostered peers.

The survey also suggested that having a dependable phone of one’s own could make a big difference when it came to a kid’s personal safety.

“A phone with internet access is a powerful tool they can always have with them to help in times of need,” said iFoster’s other co-founder, Reid Cox. “It is also a deterrent from being lured into exploitation such as CSEC,” he said, referring to child sex trafficking, a danger that is notoriously real for foster kids in group homes and other forms of “aggregate care,” where many older foster youths have traditionally found themselves.

And so it was that, in the summer of 2018, iFoster, which is located in Truckee, California, proposed a pilot program for the PUC’s consideration.

Working together with Boost Mobile, which is a subsidiary of the Sprint Corporation, iFoster proposed that eligible California foster youth and former foster youth between the ages of 13 and 26, would be provided with a free smartphone and a monthly pre-paid service plans at no cost.

The cost to the state of giving approximately 33,000 California foster youth the phones and two years of free service is slightly over $22 million.

If approved, the iFoster staff, as the program’s administrators, would work with the various county child welfare agencies to identify the eligible kids under their care. The iFoster people would also train the relevant county staff and would help create sign-up events that kids, social workers, and or caretakers, could attend.

In addition, they would monitor the effectiveness, and the “integrity” of the outreach and sign-ups, so that the program got going right.

(Not that local foster care agencies such as LA County’s Department of Children and Family Services necessarily need their integrity monitored. On the other hand, we do remember the county’s 2015 audit that located more than a half-million dollars in MTA passes, which should have gone to go to foster kids, but somehow never made it. And there was the 2017 issue of the $70,000 worth of gift donations for foster kids that sat, undistributed in a warehouse. And there was the matter of all those $153 tape dispensers the agency bought. Likely all is much better now. But, just noting.)

In addition, the pilot program would include a strategy to guide each county in measuring how frequently the kids who had been given the phones actually used them, and what kind of function the phones came to have for each of the kids, day-to-day.

Finally, iFoster proposed an “outcomes” measurement for the two years of the pilot, to track what kind of difference the program was making in individual kids’ lives — in terms of their academics, their employment situation, for the older youth, in particular, their social interactions, and their overall wellbeing.

To measure the changes in outcomes, a survey was to be delivered quarterly to each youth via text — to their nice free phones.

The pilot plan also included a system of safeguards and rules to protect the safety of the kids who received the phones.

The unique program, which iFoster hopes to take to other states once they’ve tested it in California, will be funded in part by the Federal Communications Commission’s LifeLine program, which is itself funded by the Universal Service Fund tax that all California cellphone users pay as part of their monthly bill.

Originally, the idea was to start distributing the phones this past August.

But, as is usual, things took longer. Now, however, it appears it is finally time to get the program up and running in Los Angeles County.

Thus, on Tuesday, Oct. 15, the LA County Board of Supervisors are expected to give the go-ahead for LA’s participation, in the form of a motion authored by Supervisor Hilda Solis.

The motion instructs the Director of the Department of Children and Family Services, in collaboration with iFoster and Boost “to implement the Phones for Foster Youth Program, including promotion and outreach to ensure awareness and utilization of the Program.”

Given the digital demands of the 21st century,’ Solis wrote, “the inability to access the Internet can preclude one from fully participating in a society where many facets of life are increasingly performed online.”

The motion noted that even those foster kids who do have phones, often buy burner phones, which means they only have cell and internet service when they can afford it, thus can’t give potential employers, friends, mentors, or family a stable number.

Now, it appears, however, for thousands of LA’s eligible foster youth and post-foster youth, all that is about to change.