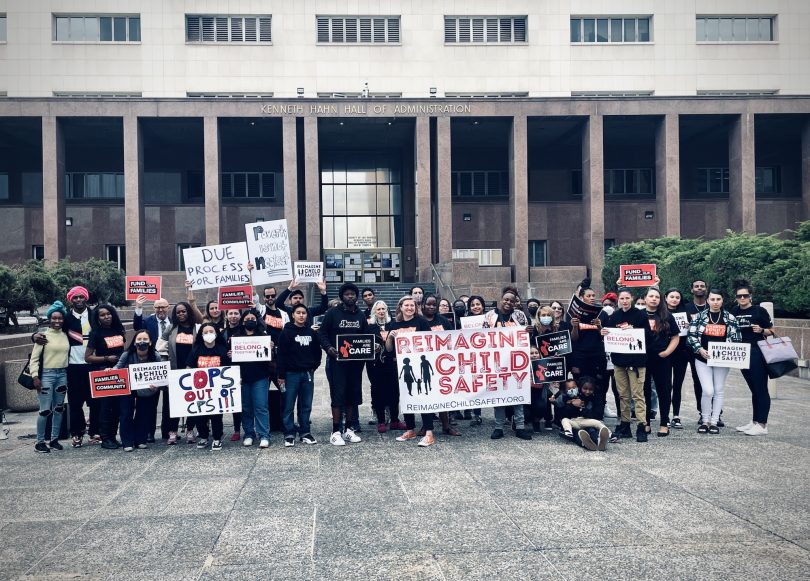 On Tuesday, May 17, the 40-organization Reimagine Child Safety Coalition rallied outside the LA County Board of Supervisors’ meeting, as the board considered a motion to pursue one of the coalition’s eleven demands for overhauling the county’s child welfare system.

The coalition, said co-founder Lamikia Castillo, demanded “that the LA County Board of Supervisors change its practices,” so that “families are not pulled apart,” and to “end state-sanctioned kidnapping of black and brown children in this county.

Last November, the coalition presented a letter and a list of demands to the board. In the intervening months, the coalition said it met with members of the board and their teams. Six months after issuing the demands, however little had changed for the county’s families involved with the Department of Children and Family Services (DCFS). That’s why, said Castillo and co-founder, attorney Chris Martin, the coalition planned its first in-person rally.

In the days leading up to the rally, the supervisors released their May 17 agenda, which included a motion from Supervisor Janice Hahn calling for a report on the feasibility of providing legal assistance to families before DCFS removes their children. (Supervisor Hilda Solis later joined Hahn as a co-author of the motion.)

The advocates, attorneys, and parents who organized the rally praised Supervisor Janice Hahn for introducing the first motion addressing one of the coalition’s demanded changes to the child welfare system.

Under the county’s current system, attorneys — from the Children’s Law Center (CLC) and Los Angeles Dependency Lawyers (LADL) — are appointed to provide legal aid to parents only after social workers file petitions seeking court intervention against those parents for allegations of abuse or neglect.

Tuesday’s motion, which the supervisors passed unanimously, takes the first step toward creating a system that would instead allow families free legal assistance before the petition, and, more importantly, before children are even removed from their homes in the first place.

“By providing prevention services and legal remedies for low-risk issues (such as counseling, respite care, help with evictions, protective orders, etc.),” the motion states, “this model results in reducing the trauma of unnecessary child and family separation and reducing the disproportionate number of black and brown families that become system involved.”

The supervisors, in their motion, called for the county to hire a consultant with expertise in pre-petition advocacy and prevention services. This consultant will work with community stakeholders, including residents impacted by the child welfare system, and report back to the board in 120 days with plans for implementing and collecting data on a pre-petition advocacy model.

“The County stands to lead the nation in creating access to true justice and to preserve one of the most fundamental liberty rights: the right of family integrity,” said Hahn and Solis’s motion.

Those at the rally told stories of how, rather than helping to preserve their families, the system tore children from parents.

Tauheedah Shakur, a member of the Youth Justice Coalition, spoke of how she and her siblings were taken from their mother, who had experienced abuse from her ex-husband, Shakur’s dad. Because police and social workers learned that Shakur and her siblings were sleeping on the floor of their grandmother’s house, where her mother had moved post-divorce, the children were taken into DCFS custody. Shakur was six years old, she said, when she was removed from the loving care of her mother and grandmother.

DCFS is not only removing children facing serious danger and neglect at home, Shakur and the other coalition members stressed. Families are frequently separated in response to circumstances where family support is needed, not removal.

Overall, LA County has the third highest rate of removal among the nation’s largest jurisdictions, at 3.89 kids removed per 1,000 in fiscal year 2021. By contrast, the next largest cities/counties, New York, Chicago, and Houston had rates of 1.55, 1.23, and .77 removals per 1,000 kids, respectively.

In foster care, away from her family, Shakur said, she experienced severe abuse.

“Because we were taken away, I know what it’s like to be abused physically, emotionally and mentally, to be molested,” she said. “I know monsters don’t just exist on TV. They exist in real life. My foster parents were monsters. The system is a fucking monster nightmare.”

The only thing Shakur’s mother was guilty of, she said, was being “poor and black and Muslim in a world that doesn’t believe she matters.” Resources, she said, should be given to families, rather than paying “strangers” to keep other people’s kids.

And, studies have found that kids whose families are the subjects of abuse or neglect investigations generally fare better in life if they remain with their parents than kids in comparable circumstances who are sent into foster care.

As folks continued to share their stories, rally attendees sat with their phones on speaker, waiting to express their support for Tuesday’s motion on the board’s call-in line. (The supervisors have not yet invited members of the public to return in-person to the weekly meetings, after going remote at the beginning of the pandemic.)

“Intervention from pre-petition counsel could prevent perhaps thousands of removals,” said Katherine Mitchell, an attorney at Los Angeles Dependency Lawyers, and a member of the coalition. “Parents do not have the knowledge to appropriately fight their case. I can confidently state that, as someone who is present in children’s court every day.”

Having an interdisciplinary team of legal aid and service providers to engage with DCFS and the court system, would help families address their needs and avoid removals, several speakers said.

As the system stands, said Chris Martin, families are “not given the right to an attorney until DCFS has already decided that they’re going to take the children.” And that decision, he said, is made “based on statements that they have coerced out of these parents without the presence of a lawyer.” Providing counsel before a case is opened in dependency court, will ensure parents “understand the allegations against them, their due process rights, and what to expect as the investigation unfolds.”

Right now, Martin said, “they don’t get any of that. And that is fundamentally wrong.”

The coalition’s ten other demands include the creation of an independent civilian oversight commission on child welfare, and a moratorium on removing kids after a parent has been the victim of domestic violence.

An attorney with the Legal Aid Foundation of Los Angeles, Lisa Davis, told the board that nearly every time she meets with a survivor of domestic violence, they are “distraught” because they face the threat of “losing their children to DCFS because they finally sought help.”

These parents, Davis said, “should not live in fear of losing their children because they suffered abuse. These parents would greatly benefit from pre-petition advocacy services … but also social services, housing, and support so their families stay together.”

Avenues must also be opened for people with past felony convictions to be approved as relative caregivers for kids who would otherwise be placed with foster families, according to Reimagine Child Safety.

In an upcoming series supported by USC Annenberg’s Center for Health Journalism, WitnessLA will share the stories of parents who have lost their infants to the system after hospital drug tests, after calling the police for help while experiencing domestic violence, when social workers deem living conditions created by poverty to be neglect, and more.

The series will dive into what children and families face when they come into contact with LA County’s child welfare system, and how the system most negatively impacts Black and Indigenous families, and punishes parents for their lack of resources.