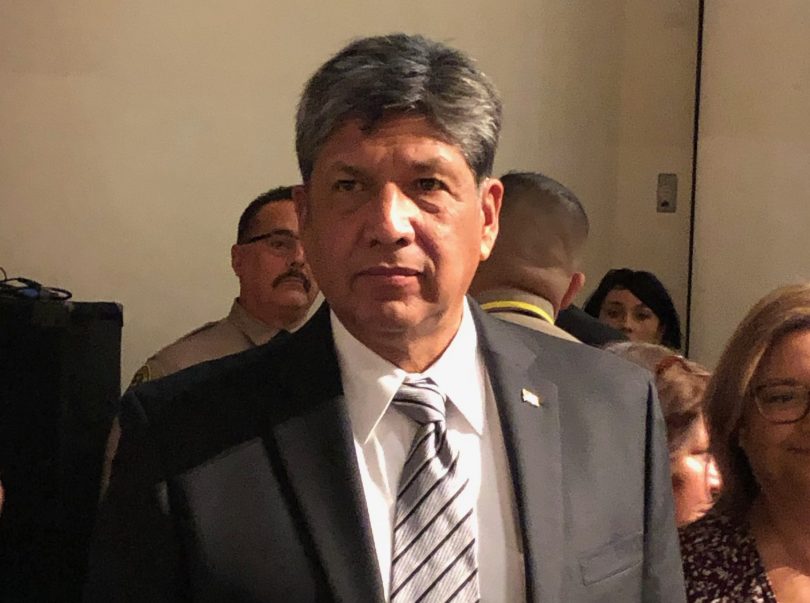 Los Angeles County Sheriff Alex Villanueva has unexpectedly parted ways with his well-regarded undersheriff, Ray Leyva, who has been the second-in-command at the nation’s largest sheriff’s department since Villanueva selected his command staff in December.

According to the department, Leyva has resigned. But several sources close to the department told WitnessLA that Leyva was asked by the sheriff to tender his resignation on Monday, effective immediately.

He is being replaced by Assistant Sheriff Tim Murakami, who was in charge of the patrol side of the department prior to this move.

Murakami was also one of those named by Villanueva to serve on the panel that could bring back fired deputies.

The addition of Ray Leyva to the department’s very top ranks was reassuring to many LASD watchers both inside and outside the department. While Villanueva ran a very smart campaign and had refreshing ideas, he retired as a lieutenant. This meant that, although he was a supervisor, he had not little or no experience with command.

Thus department watchers and most veteran department members expressed hope that the brand new sheriff, would surround himself with respected and knowledgable people, with robust, and faction-free leadership experience, who would lend strong ballast to his first command staff as Villanueva took over the massive and complex department.

Leyva was one of those who qualified on all counts.

Thus it was a surprise when Leyva, who had supported Villanueva—and had come out retirement at Villanueva’s request—was all at once shoved out the department door.

Leyva received the news that he was being fired first thing Friday morning.

“I had a meeting with the sheriff,” he said when he recounted the event to WLA.

“And when I sat down, he said ‘I’ve decided to put a sworn person in your position. Thank you for your service.’”

Leyva asked if the change was effective that day, Friday. Sheriff Villanueva said, it was.

“So I stood up, and said, ‘Well thank you for the opportunity you’ve given me. I wish you the best.’”

Then the sheriff and his now former undersheriff shook hands.

On his way out the door, Leyva also shook hands with Villanueva’s chief of staff, Larry Del Mese, who was one of those present for the firing, and is said to be one of the most influential people in the sheriff’s administration.

The other primary name on the list is Chief Eli Vera who, along with Murakami, was on the panel that participated in the still controversial reinstatement of Deputy Carl Mandoyan.

In fact, it was Vera who authored the panel’s memorandum (which WitnessLA has obtained) describing the group’s analysis of the charges against Mandoyan, whether the evidence supported the charges, and what the appropriate discipline should be as a consequence.

Some sources we spoke with suggested that the “sworn” officer issue may have been an excuse to let Leyva go, because the now ex-undersheriff has reportedly, at times, tried to advise the sheriff to redirect or ameliorate some of his more contentious actions—some actions relating to the ongoing Mandoyan drama likely among of them.

One source suggested that it may not have helped that the sheriff is said to be working on rehiring two more former department members, one of whom is reportedly a deputy who was terminated by the department because of alleged spousal abuse.

However, this deputy, reportedly, has yet to go through his civil service review, which means his case could be legally less complicated than those whose terminations have been upheld by the county’s Civil Service Commission.  Yet, outside the department, such a case could cause explosions.

Or there may have been some other bones of contention.

Leyva had been on a medical retirement when he rejoined the department, which meant he was on a different kind of contract, which lasted 120 business days.  But the contract was expected to be renewed if the sheriff had still needed Leyva after the approximately six months of the contract ran out.

Leyva previously ran for sheriff in 2006, and considered running a second time when Baca suddenly retired after federal indictments started rolling in.

Leyva told the LA Times that he was “disappointed,” at the sudden turn of events.  “I wanted good things to happen for the department, and I wanted to be part of that,” he said.

So it seemed.  When we spoke to Ray Leyva at  Sheriff Villanueva’s swearing-in on December 3, he was clearly enthusiastic about joining the new sheriff’s team.