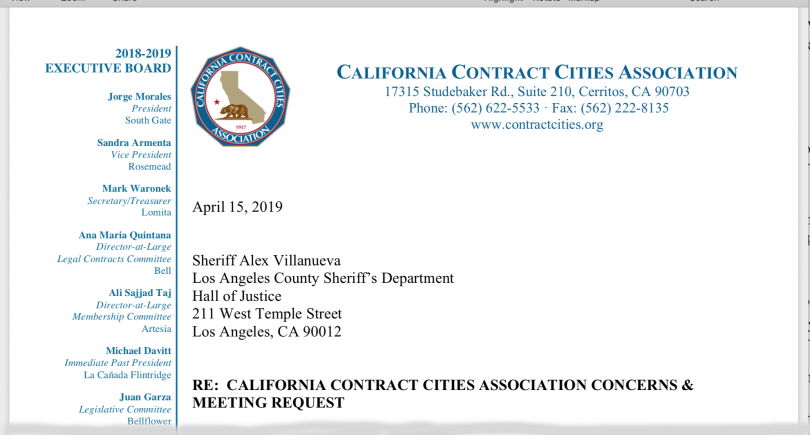 The letter, dated April 15, which WitnessLA has obtained, points in particular to news stories about the sheriff’s ongoing conflicts with the county’s board of supervisors, which the association’s executive board members said they feared could result in “fewer resources to keep our cities safe and our deputies well equipped and trained.”

But worse than that, it seemed, were the stories about Villanueva’s controversial re-hires, which the executive board called “a cause of increasing concern” among the association’s membership. 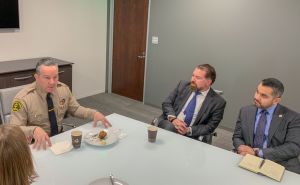 “There is significant risk associated with reinstating deputies who have a history of excessive force or other misconduct and were previously dismissed in accordance with long-established department policy,” the  board of directors wrote.  This was “particularly” true, they said,  “if those deputies are ever assigned to a contract city.”

Such an assignment would pose “an increased risk and potential for costly and undesired liability,” they continued, should one of these reinstated deputies with problematic behavior in his or her past “be involved in any future incidents that lead to litigation.”

The board said that each of the cities owe it to their “residents and business owners” to make sure their cities were “served by peace officers of the highest quality and performance.”

On top of those concerns, the association’s board also expressed unhappiness with an exchange taken from an interview with the sheriff published on April 5, in the Los Angeles Times.  The portion they referenced was as follows:

Q. Is there anything you want to say to those voters, or to the mayors of the cities in Los Angeles County who contract with your department for policing, given all the turmoil that’s going on?

A. They couldn’t care less. The mayors of the contract cities, they’re excited that we’re actually turning over the process of picking who their station commanders are — their chiefs of police. We’re breaking down a lot of barriers. We’re using a collaborative process that reflects the will of the community.

This answer Sheriff Villanueva appeared to have given the LA Times turned out to be particularly disquieting for the board.

“While we realize quotes are sometimes taken out of context or not completely accurate,” the association wrote, “any representation that mayors, council members, or city managers ‘couldn’t care less’ is inaccurate and highly troubling. Each of our elected officials and city managers places public safety as their number one priority.”

With all of this in mind, the association asked Villanueva for a meeting to discuss the sheriff’s positions on their concerns, and to clarify their own positions, both as partners, and as “your largest customer in the County.”

The contract model offers a wide range of services, and allows each city to choose the level of service they want, buffet style, thus choosing the number of deputies and supervisors, et al, that best meets the individual city’s needs.

These contract law enforcement programs are also highly beneficial to the department, in that they provide combined annual revenue for the LASD of approximately $600 million.

According to the board, with every newly elected sheriff in Los Angeles County, the association and the sheriff’s department have been pretty successful at forging good relationships “based on trust and mutual respect.”

With this  in mind, the organization threw a welcome reception for the then brand new sheriff on December 18, 2018.

Now, however, the association’s various cities and their leaders are worried.

We asked Brian Moriguchi, who is president of the Los Angeles County Professional Peace Officers Association (PPOA), for his thoughts on the letter.  (PPOA is the union that serves most of the LASD’s supervisors.)

“The comments made by the California Contract Cities Association should be of serious concern to the sheriff,” Moriguchi told us.  “These 42 contract cities are really the bread and butter of this department. And to sour that relationship could do significant damage, and not just to the department, but to the public that we serve in those contract cities.”

WitnessLA also reached out to members of the association’s board, and their executive director, Marcel Rodarte, to find out whether or not they have heard back from Sheriff Villanueva or a member of his command staff in order to set up the meeting they requested in the letter.

Rodarte got back to us late Wednesday afternoon, with kind apologies for not being available sooner.

“As we state in our letter,” he wrote,  “we hope to arrange a meeting with Sheriff Villanueva and his key staff in the near future to discuss our concerns.”

(Readers may read the letter for themselves here:  April 15 Letter to Sheriff Villanueva from Contract Cities)