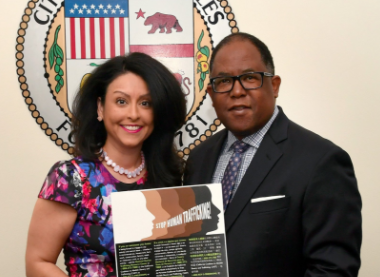 California’s SB 1193 requires certain businesses—like airports, bus stations, hospitals, strip clubs, bars, and rest stops—to put up posters that feature a hotline for witnesses to report sexual exploitation and other forms of human trafficking and for victims to receive help.

Ridley-Thomas and Martinez’s move comes after volunteers from the Human Trafficking Outreach Project reported that more than half of the California businesses they visited were out of compliance four years after SB 1193 became law.

Ensuring that the national hotline number is posted in strategic places may seem like a minor action in the fight against trafficking, but it is one of the most effective ways to increase human trafficking arrests, according to a report funded by the National Institute of Justice. Between 2007 and 2015, the National Human Trafficking Resource Center gave law enforcement agencies over 6,500 tips gathered from hotline callers.

“SB 1193 must be enforced, because having access to that hotline information can be the one thing that saves her from the bondage of sex trafficking,” Councilwoman Martinez said. “When a young girl is being trafficked by a gang member pimp, she rarely knows whom she can turn to for help.”