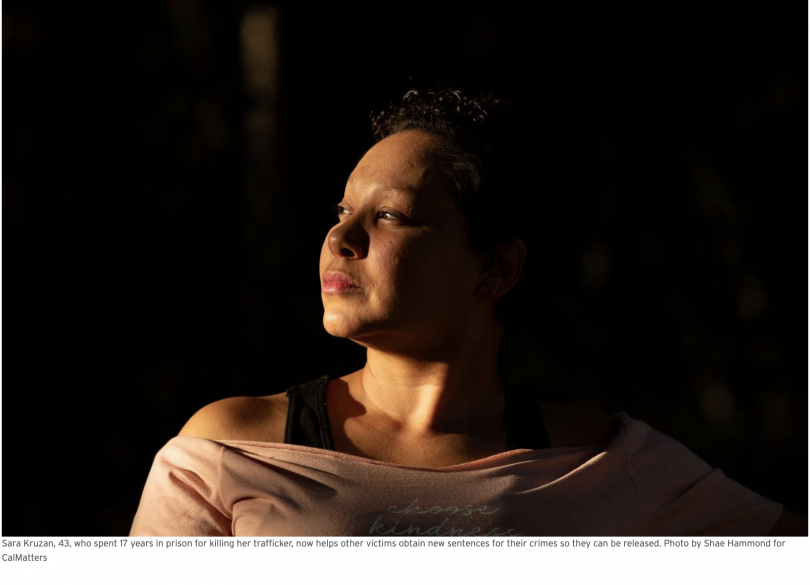 Sara Kruzan was in her cell when she received a fax that changed her life. After spending some of her teenage years, all of her 20s and much of her 30s in prison for killing her trafficker, Kruzan learned that California’s attorney general had acknowledged that she was a victim of domestic violence. That was 2012. A year later, she was released from prison.

But the same year that Kruzan received that fax, another California teenager was about to follow her same path. Keiana Aldrich was headed to prison after taking a plea deal in Sacramento County for kidnapping and robbing a man who tried to hire her for pornography even though she was a minor. The man didn’t spend a day behind bars, but Aldrich, 17, was prosecuted as an adult and served eight years in prison.

“I still feel like I’m 16,” said Aldrich, now 25, her voice cracking, a few weeks after being released from prison last November. “Everything’s not the same anymore. It’s all different. I’m learning how to drive…I’m learning how to be an adult now.”

More than a decade in age separates Aldrich and Kruzan, but their stories are similar: They both were Black girls abused as children and cycled from one failed system to the next. Schools didn’t protect them. Juvenile detention centers didn’t help them. And courts threw them in prison for violent crimes against their abusers.

California has evolved in how it treats underage and adult victims of sex trafficking. But women are still sitting behind bars for violent crimes they committed while being trafficked.

“California still doesn’t have a clear statutory off-ramp for survivors that are incarcerated whose original prosecution and sentencing didn’t take into account that they were trafficking survivors,” said Aldrich’s attorney, Maggy Krell. 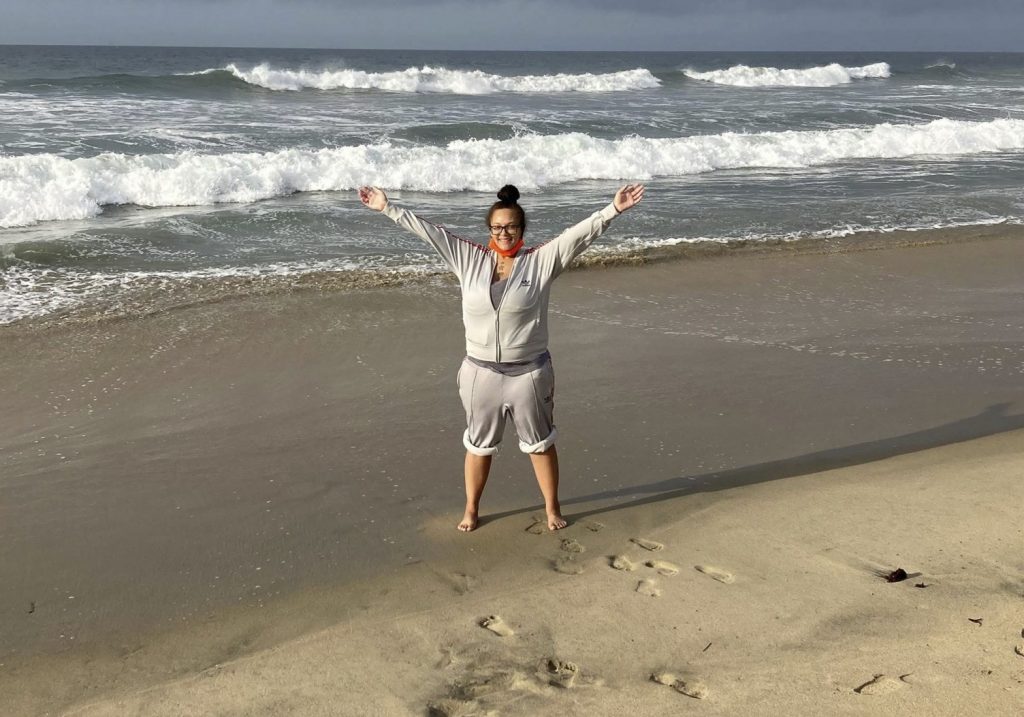 Keiana Aldrich celebrates at the beach after the motion for her resentencing was granted and she was released from prison in November. “I had chicken nuggets, I went to the beach right when I got out of prison and I got my nails done,” she said. Photo courtesy of Maggy Krell.

In 2017, police in California stopped arresting minors for prostitution under a new “no such thing as a child prostitute” law. That same year, the state also created an avenue for some adults and minors to have their convictions vacated if they committed nonviolent crimes as a result of being trafficked. In 2018, Gov. Jerry Brown signed a law allowing district attorneys to call for resentencing for any crime.

No one knows how many people have been left in California’s prisons as the policies related to arresting and prosecuting trafficking victims have changed. The data have never been collected. But advocates and attorneys say they have encountered many.

While there are avenues for some people to be released, advocates say that the state should do more to specifically address trafficking victims.

“The clearest policy changes that California could make today would be one, create an off-ramp for survivors who are currently incarcerated,” Krell said. “And then, two, to prohibit the practice of prosecuting children as adults when those children are victims themselves.”

Right now, the path toward release is petitioning the court for resentencing.

But the resentencing process often requires a savvy attorney, a willing district attorney and an agreement from the judge.

It’s how Keiana Aldrich was released.

Aldrich’s attorney petitioned the court last year for resentencing, saying that her prosecution and sentence “failed to fully consider her status as a sex trafficking victim” and her history of “chronic and severe abuse.” The district attorney concurred, and a month later, Aldrich was headed home.

“I’m thrilled that I’m out, but I want people to have a pathway to getting out, too,” Aldrich said.

While incarcerated, she met many people with stories like hers, but they lack one critical piece to being released. “They don’t have lawyers,” she said.

Although the laws that created a pathway for Aldrich’s release can be used by others who’ve committed violent crimes, there are barriers: Sometimes the prisoners don’t even understand that they’re victims.

“One of the things that we have not really mastered yet is how do we … provide that kind of mental health treatment so people can start to see their victimization and then understand that they have the right to challenge a conviction,” said Alameda County District Attorney Nancy O’Malley.

O’Malley has built her career on creating a blueprint for how police and prosecutors should fight against human trafficking, launching the Human Exploitation and Trafficking Unit in 2006.

Prosecutors have always had discretion in how they charge cases, and they still do. The difference now: More prosecutors are able to spot human trafficking victims; there are special courts in California for juveniles who have a history of trauma or exploitation, and prosecutors receive training.

For violent crimes like the ones that Kruzan and Aldrich committed, prosecutors today are usually more lenient — charging them as minors rather than adults, or sending them to juvenile halls rather than prisons. Or in some cases, not charging them with crimes.

“We had a case of a woman charged with carjacking and kidnapping,” O’Malley said. “The original story was she carjacked the guy’s car. But on a deeper dive, we could say, no. She was a victim of human trafficking.”

O’Malley’s office dropped the charges and escorted the victim back to her family in Seattle so she could recover.

“California has been ahead of the game on this conversation for a long time,” said Maheen Kaleem, a human rights attorney and co-author of a national report called The Sexual Abuse to Prison Pipeline.

In 2015, the Human Trafficking Hotline recorded 817 sex trafficking cases in California. By 2019, California cases rose to 1,118. Minors were involved in 21% of all reported trafficking cases, which includes forced labor cases as well as sexual exploitation.

The victims are overwhelmingly Black women and girls. Just one year before California law banned the arrest of minors for prostitution, Black girls represented more than 70% of juveniles referred to juvenile court or probation for prostitution, according to Juvenile Court and Probation Statistical data from the Justice Department.

Citations for minors who are sex trafficked have cratered since the “no such thing as a child prostitute” law passed in 2016. In the three years since then, 49 children under the age of 18 have still been cited (although not arrested) for prostitution, compared to 282 in 2012 alone, according to Justice Department statistics.

It took years of advocacy, mostly from women like Jessica Nowlan, to trigger the steep decline in prostitution prosecutions of minors in California.

“What we’ve seen is that at every step, these young folks —  mostly girls, mostly girls of color, mostly poor folks — are criminalized for existing and trying to figure out how to navigate these systems and navigate safety,” said Nowlan, who runs the Young Women’s Freedom Center, which is driving a legislative agenda that decriminalizes survivors.

Included in the advocates’ list of priorities: helping women who are still behind bars.

Los Angeles Assemblymember Sydney Kamlager, chair of the select committee on incarcerated women, acknowledges that this is a problem, from courts not accounting for people’s trauma to the state’s lack of data on how widespread this problem is.

She recently introduced legislation that would require courts, during sentencing and resentencing, to consider how trafficking victims’ trauma contributed to their crimes. But she said finding the right path forward is not as simple as a new law; she said the system needs to be transformed.

“We have a system in place that is not really focused on rehabilitation,” said Kamlager. “Should we be collecting data? Yes, we should. But it’s also about…figure(ing) out how they can best be served if and when they are incarcerated.”

Hillary Blout, founder and executive director of For The People, a nonprofit based in Oakland, helped write the state’s 2018 resentencing bill, which encompasses all crimes, not just trafficking. Her organization has worked with district attorneys to release more people through resentencing.

“I think there’s a lot of momentum around getting certain laws passed, and we don’t see as much attention and focus when it comes to the implementation of these laws,” she said.

“The implementation can be pretty daunting, and obviously very frustrating for people,” Blout added. “We’re a small shop, and we just got ourselves up and running to try to meet some of this demand, but it’s not enough.”

Exploitation behind bars, too

After Kruzan was released from prison, she dedicated herself to helping other women like her.

“The systems overlap one another,” said Kruzan. “Unless we go in and really fix the systems, this cycle is going to continue. It breeds harm.” 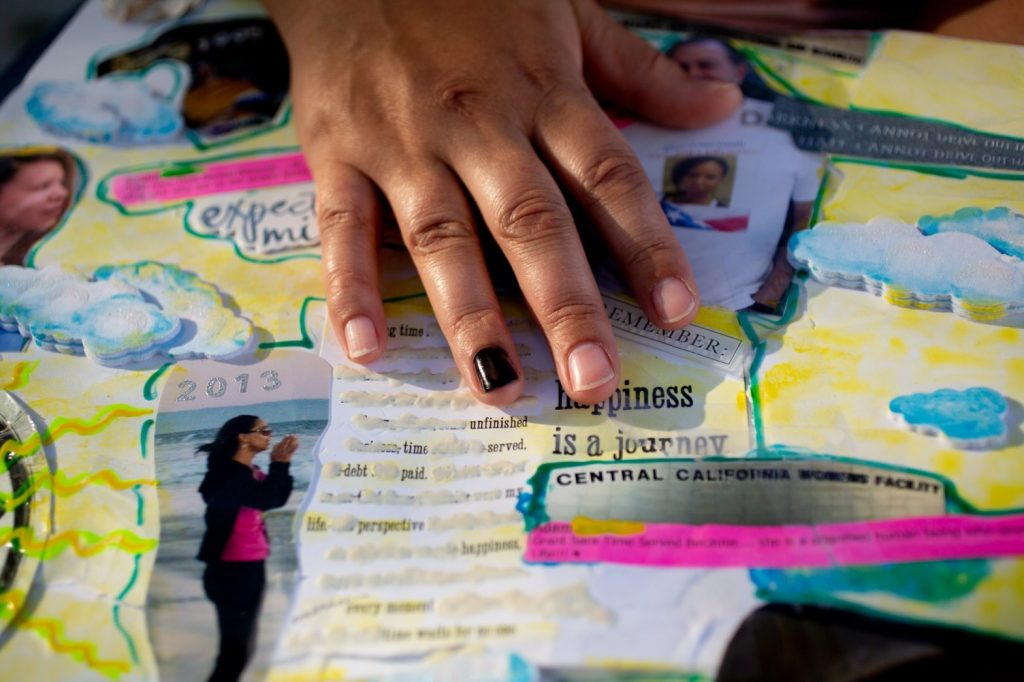 Sara Kruzan shares a poster she made while incarcerated with photos of herself and quotes that she felt were meaningful. Photo by Shae Hammond for CalMatters

Kruzan was 11 years old and living in Riverside when G.G. Howard, a man nearly three times her age, spotted her walking home from school. That was the beginning of a years-long grooming process that led to Kruzan being first trafficked at 13, according to the clemency petition Kruzan’s attorneys sent to Gov. Arnold Schwarzenegger in 2010.

By 16, she was arrested for robbing and killing Howard, 36, in a hotel room. She was tried as an adult and sentenced to life without the possibility of parole. Schwarzenegger reduced her sentence to 25 years to life, which allowed her to be granted parole. She served 17 years in prison and was released in 2013, a year after then-Attorney General Kamala Harris acknowledged that she qualified under the state’s definition of domestic violence.

Throwing herself into advocacy after her release took a toll on her.

“I needed to take some time to kind of refocus, and reboot myself,” said Kruzan, who is now 43. But the work doesn’t stop. “There are still survivors inside of prison, and there still is violence being imposed (on them in prison).”

That was true for Aldrich.

The violence against Aldrich didn’t end when she went to prison. It continued, according to a lawsuit she filed against several prison employees.

Aldrich’s lawsuit alleges that a prison guard and several employees of the Prison Industry Authority, which manages operations within California prisons, sexually assaulted her while she was incarcerated in the California Institution for Women in Chino. Aldrich also alleges that prison staff retaliated against her after she reported the abuse.

After an investigation, the prison guard was fired from his job last August, according to a prison spokesperson. The case was referred to the San Bernardino County District Attorney’s Office. In addition, some of the prison supervisors named in the case no longer work for the agency.

The corrections department is “vigorously enforcing our zero-tolerance policy for sexual violence, staff sexual misconduct, sexual harassment, and any forms of retaliation for reporting such conduct,” said a spokesperson.

As the lawsuit winds through the court, Aldrich wants people to understand that she’s more than what her past suggests.

“People like us deserve a chance,” she said, “a chance in life, and not just to be thrown away and wasted like we’re nothing.”

Byrhonda Lyons is a multimedia journalist at CALmatters, where this story first appeared.