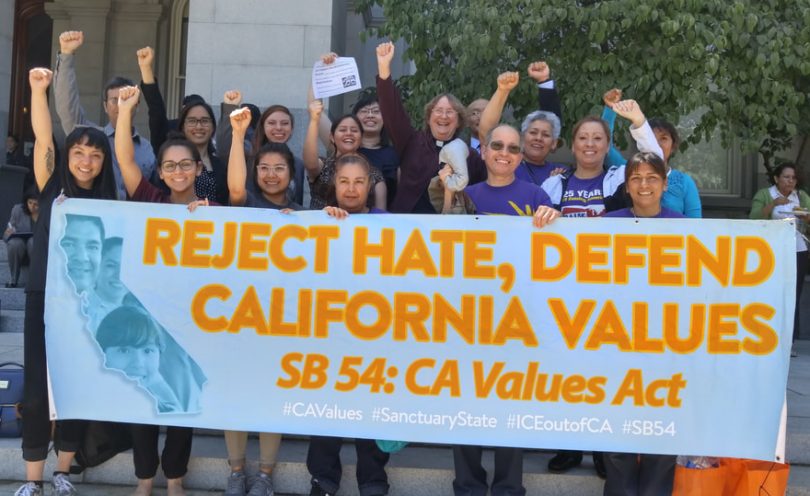 In March 7 of this year,  Attorney General Jeff Sessions announced that he had filed a legal action against the State of California, Governor of California Jerry Brown, and Attorney General of California Xavier Becerra, in order to stop implementation of three California laws, claiming that certain provisions of the three statutes “violate the Supremacy Clause of the United States Constitution.”

On Thursday morning, however, John A. Mendez of the United States District Court for the Eastern District of California ruled in the state’s favor on most of the government’s challenges.

The three statutes the feds targeted were: AB 103, which gave the state’s attorney general the power to monitor all California immigration detention facilities―both private and public; AB 450, the Immigrant Worker Protection Act, imposes various prohibitions and requirements on employers with regard to worksite inspections by immigration enforcement agents; and finally, SB 54, the California Values Act, the flagship of the fleet, which is referred to by many as the “sanctuary state” law.

So do these three laws violate the U.S. Constitution?

The government’s main target was SB 54, which  prohibits local authorities from asking about a resident’s immigration status in the course of routine interactions. The law also bans, as Governor Jerry Brown explained in his signing message for the bill, “unconstitutional detainer requests” and prohibits the “commandeering of local officials” to do the work of immigration agents.

“In enshrining these new protections,” Brown also wrote, “it is important to note what the bill does not do. This bill does not prevent or prohibit Immigration and Customs Enforcement or the Department of Homeland Security from doing their own work in any way.”

The Department of justice begs to differ, hence the government’s motion for an injunction to block the law.

Yes, “the law makes enforcement more burdensome than it would be if state and local law enforcement provided immigration officers with their assistance,” Mendez continued in answer to his own question.

“But refusing to help is not the same as impeding.”

If it were all about convenience, according to Mendez, the feds could go ahead and commandeer state resources.  But that would require subverting “Tenth Amendment principles,”

(Just to remind you, the Tenth Amendment reads: “The powers not delegated to the United States by the Constitution, nor prohibited by it to the States, are reserved to the States respectively, or to the people.”)

Further more, Mendez wrote, “standing aside does not equate to standing in the way.”

With SB 54, California simply :governs the activities of the State’s own law
enforcement agencies.” Which it gets to do, legally.

All bark, no bite

The next law the DOJ targeted was AB 105, which gives the CA attorney general the right to inspect immigrant detention facilities in the state to be assured those in the facilities were not being mistreated.   The government’s argued that such access meant information about the facilities and the detainees would be handed over to “the public.”

California attorneys countered that the state’s attorney general was not in fact, “the public,” but the state’s top law enforcement officer. Consequently, these sort of inspections fell within the AG’s “broad constitutional powers to enforce state laws and conduct investigations relating to subjects under his jurisdiction

Worksite inspections and a “cynical view”

Where the judge did side with the government was on three out of four clauses of AB 450, having to do with worksite inspections by immigration officials.

The main clause had to do with fines that the law slapped on employers who cooperated with the feds in certain ways, which Mendez didn’t like, mostly because he thought it unfair—not so much to the government, but to the employers.

“The Court finds that a law which imposes monetary penalties on an employer solely because that employer voluntarily consents to federal immigration enforcement’s entry into nonpublic areas of their place of business or access to their employment records impermissibly discriminates against those who choose to deal with the Federal Government,” Mendez wrote.

Mendez also sided with the government on two other clauses in AB 450 having to do with employers reverifying employees authorization to work, and whether the feds needed a search warrant to show up at a place of employment. In short, the judge ruled that employers could reverify, and the feds didn’t need a search warrant.

Such notice, Mendez pointed out, provides employees with “an opportunity to cure any deficiencies in their paperwork or employment eligibility,”—which one might think the feds would want, since federal law “affords” a similar courtesy to employers.

“The Court,” Mendez wrote, his tone curt, does not view “an extension” of that same “courtesy to employees” as an egregious attempt “thwart immigration regulation,” as the government contended.

Unless, of course, one’s intent is simply to be as punitive as possible.

The state’s officials seemed uniformly delighted with the ruling, especially Mendez’s rejection of the DOJ’s attempt to legally vaporize AB 54, the most significant of the three laws.

California Attorney General Xavier Becerra praised the “strong ruling against the federal government’s overreach.” The Constitution, he said, “gives the people of California, not the Trump Administration, the power to decide how we will provide for our public safety and general welfare.”

State Senator Kevin de León, AB 54’s bill’s author, said in a statement on Thursday, that while the state cannot stop the administrations “mean-spirited immigration policies,” neither did the state have to help out with those policies.

(De León, as most know, is in a runoff with U.S. Senator Dianne Feinstein for her senate seat.)

On the government’s side, U.S. Department of Justice spokesman Devin O’Malley called described the rulings on AB 105 against fines for employers, a “major victory for private employers in California who are no longer prevented from cooperating with legitimate enforcement of our nation’s immigration laws.”

Near the end of his ruling, Mendez wrote his own frustration-laced statement about what his decision meant and how it should be viewed.

The ruling was reached, he wrote, “without concern for any possible political consequences.”

But,  Mendez continued, “if there is going to be a long-term solution to the problems our country faces with respect to immigration policy, it can only come from our legislative and executive branches. It cannot and will not come from piecemeal opinions issued by the judicial branch. (Italics ours.)

“Accordingly, this Court joins the ever-growing chorus of Federal Judges in urging our elected officials to set aside the partisan and polarizing politics dominating the current immigration debate and work in a cooperative and bi-partisan fashion toward drafting and passing legislation that addresses this critical political issue. Our Nation deserves it. Our Constitution demands it.”

In his post-ruling statement, Governor Jerry Brown referenced the judge’s expression of vexation with the inaction of nation’s legislative branch.

“I agree with Judge Mendez that piecemeal judicial decisions won’t solve the nation’s immigration challenges. Only Congress can chart the path forward by rising above mindless, partisan divisions and working together to solve this problem, not exacerbate it.”

Virtually everyone, including Judge Mendez, expects the government to appeal Thursday’s ruling.