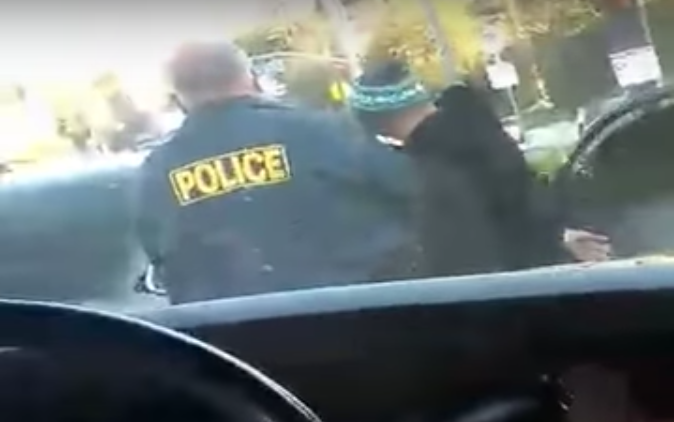 LOS ANGELES FATHER OF FOUR WITH OLD, LOW-LEVEL OFFENSES ARRESTED BY ICE WHILE DROPPING HIS DAUGHTERS OFF AT SCHOOL

Last Tuesday, federal immigration officers arrested Romulo Avelica-Gonzalez, an undocumented immigrant, while the father of four was dropping his teenage daughters off at their Highland Park school with his wife.

The 48-year-old father has resided in the US for more than 25 years and works at a Mexican restaurant. His children were all born in the US. Avelica-Gonzalez reportedly has a decade-old DUI conviction, as well as a conviction from more than 20 years ago that “related to having bought a car that he did not realize had a registration sticker on it that did not belong on the car,” Emi MacLean, an attorney with the National Day Laborer Organizing Network told LAist’s Julia Wick.

Avelica-Gonzalez’s 19-year-old daughter, Jocelyn, described her father as a hardworking man who “would do anything for his family.”

MacLean, whose organization is advocating for the Avelica-Gonzalez family, said that ICE used the old, low-level convictions to justify deporting a “bad” immigrant, despite the fact that Avelica-Gonzalez poses no threat to his community.

On Tuesday evening, the man’s family was notified that Avelica-Gonzalez had been granted a temporary stay, and would not be immediately deported. The father remains in detention, however.

The temporary stay is not the “final victory,” MacLean says. “The struggle in his case, and in many other cases, is going to continue.”

Avelica-Gonzalez isn’t the only undocumented immigrant with very old, low-level offenses being forced to leave the US.

Clarissa Arredondo, a grandmother helping to raise her two young granddaughters while their father is in Afghanistan, was deported to Mexico late last week. Arredondo, 43, was reportedly considered an enforcement priority. Her offense? According to her daughter, Adriana Aparicio, officials deported Arredondo for lying to obtain welfare. And Aparicio, a Deferred Action for Childhood Arrivals “dreamer” studying to become a nurse worries that she will not be able to travel to Mexico to visit her mother due to her own undocumented status.

Aparicio’s mother-in-law, Lt. Col. Marie Pauley, who is on active duty in the Army, told the San Diego Union-Tribune’s Kate Morrissey that she is considering retiring early to help care for her grandchildren after Arredondo, the “backbone” of the family, was deported.

“She’s not a criminal,” Pauley told the Union-Tribune. “I think we got it wrong.”

FACING DEPORTATION WITH NO CRIMINAL RECORD

In Oregon, Roman Zaragoza-Sanchez, a father of five, is one of a number of undocumented immigrants who have been arrested and detained who have no criminal history.

In Houston, immigration officials deported Jose Escobar, another husband and father without a criminal record, who had been living in the US since he was a teenager.

CALIFORNIA’S DEMOCRATIC SUPERMAJORITY PUSHING THROUGH BILL TO PROVIDE LEGAL AID TO UNDOCUMENTED IMMIGRANTS, BUT QUESTIONS ABOUT WHO SHOULD RECEIVE ASSISTANCE REMAIN

A bill making its way through the state legislature would set aside $12 million from the General Fund to ensure that immigrants facing deportation have access to legal representation.

Introduced by state Sen. Ben Hueso (D-San Diego), SB 6, the Due Process for All Act, has been fast-tracked by California’s Democratic lawmakers seeking to protect the state’s undocumented families from President Donald Trump’s “deportation machine.”

There are, however, still unanswered questions about who should benefit from the funds.

An earlier amendment to the bill would have excluded anyone convicted of a violent felony from accessing representation via the SB 6 program.

The latest amendment, however, allows all immigrants to apply to be screened for legal services. If an applicant has been convicted of a violent crime, they will not be eligible for representation unless they have a very high likelihood of not being deported based on the circumstances of their case. Critics of the proposed bill have argued that the funds should not be used to provide attorneys for immigrants with criminal convictions.

The LA Times’ Jazmine Ulloa explores the issue, telling the story of Maria, a mother who faced deportation after attempting to steal dress shoes and a shirt for her son to wear at his eighth grade graduation. Maria was charged with a felony—second degree burglary. She was also charged with five misdemeanors, which included petty theft and possession of burglary tools (the purse she stuffed her stolen items into).

San Francisco, Los Angeles and other major cities and counties have also set aside money for attorneys to represent undocumented residents.

On Monday, San Francisco Mayor Ed Lee approved the hiring of three attorneys and one paralegal with over $200,000 in savings from the city’s budget to defend immigrants facing deportation. With the four new positions, the SF Public Defender’s Office will be able to assist 150 immigrants in detention.

US Homeland Security Secretary John Kelly confirmed Monday that he is considering separating parents from their children when they illegally cross the US-Mexico border.

Kelly says parents seeking asylum or facing deportation would be kept in federal custody while kids would be placed in the care of the Health and Human Services department, in the “least restrictive setting” possible until they were taken in by US relative or other guardian. Currently, because of a federal appeals court ruling banning the extended detention of immigrant children, families are only held in detention centers for short periods before being released. An Obama administration policy blocked the feds from holding mothers and their children at family detention centers for more than 21 days.

According to Kelly, the proposal being considered by DHS aims to deter parents (particularly women who face high rates of sexual abuse) from making the dangerous trek from Central America through Mexico and into the US with their children.

Critics have slammed the proposal as a violation of human rights.

If implemented, the plan is expected to come up against legal challenges having to do with immigration and family law. The Trump administration would also have to facilitate a major increase in the immigrant detention population if mothers are no longer freed with their children.

Reuters’ Julia Edwards Ainsley broke the story over the weekend with information about the proposed new policy from three Dept. of Homeland Security officials.

Citing major backlogs in the nation’s immigration courts, Sec. Kelly has also proposed to employ fast-track deportations for undocumented immigrants who are unable to prove that they have lived in the US for two years before their arrest. Fast-tracked immigrants would not be entitled to a hearing before an immigration judge where they can obtain a lawyer and argue their case for remaining in the US.

This proposal, too, would likely face a considerable legal battle. The US Supreme Court has made it clear that both documented and undocumented immigrants are protected by the Constitution’s promise of due process.

The LA Times’ David Savage has more on the proposal.