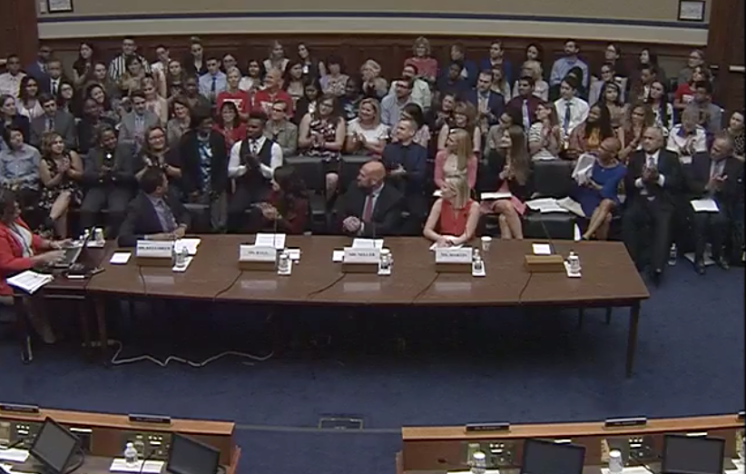 WitnessLA has reported many times, and from many perspectives, on the ways that childhood trauma and youth justice issues are often inextricably intertwined.

That’s why it was so heartening to see the bi-partisan involvement in this month’s House Oversight and Reform Committee hearing, which took the time to probe—with the help of expert witnesses—the crucial issue of childhood trauma.

Elizabeth Prewitt’s story below gives you an in-depth look at how the hearing unfolded, and what legislation on the topic of childhood trauma has captured the attention of the nation’s youth advocates.

Personal stories from witnesses and U.S. representatives packed an unexpectedly emotional wallop during the House Oversight and Reform Committee hearing on childhood trauma

The power of personal stories from “witnesses ‘and committee members fueled the July 11 hearing on childhood trauma in the House Oversight and Reform Committee,* which ran for nearly four hours of often searing testimony, along with member questions and statements. (Click here for the full video.) The hearing was organized into two panels—testimony from survivors followed by statements from experts. But personal experiences relayed by witnesses (including the experts) and the personal stories members of Congress blurred the lines of traditional roles.

Chairman Elijah Cummings (D-IL) set the tone early by recalling his childhood experience of being in special education from kindergarten to sixth grade, and being told he would “never be able to read or write.”  Still, he “ended up a Phi Beta Kappa and a lawyer.”  And a revered member of Congress.

Near the end of the hearing, Rep. Mark DeSaulnier (D-CA) spoke about the “personal and private,” multi-generational experience of addiction and abuse in his family, including the death of his father by suicide.  (Click here for video of Rep. DeSaulnier’s statement).

DeSaulnier said he often reminds himself of the tale he heard years ago about children drowning downstream before someone finally said, “let’s go upstream to see why.” 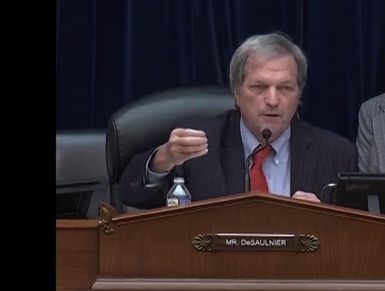 According to Pressley it was a school nurse who “saw the signs of trauma and abuse” in her own life.

It is so important that the school community “is trained in these indicators,”  she said, noting that some children act out, due to trauma.  “But there are many more that shut down. I was one of those children. ”

After the committee members’ comments, the witnesses took center stage.

William Kellibrew, the committee’s first witness, described how he’d become suicidal years after his brother and mother were killed—and his life was threatened— by his mother’s partner. He finally got help from a skilled and caring therapist, he said.

Killebrew then asked to yield the remainder of his time so that his grandmother, who was present, could stand and be acknowledged.

The room erupted in applause,  as it did one more time at the end of the survivor’s panel, with the representatives along with everyone else in the hearing room, delivering a rare standing ovation.

(Dan Press, legal advisor to the Campaign for Trauma-Informed Policy and Practice, said he had never seen a standing ovation in a hearing in his 45 years of working with Congress.) 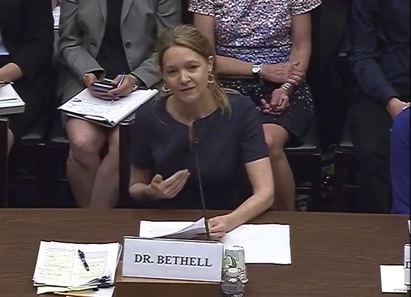 Expert witnesses Dr. Debra Houry and Dr. Christina Bethell shared some of their life experiences as well as their expertise. Dr. Houry told about the time as an emergency room physician when she discovered evidence of injury from child abuse when a child was brought to the ER for other problems.

Bethell said that her own high-ACE childhood began at her birth with multiple hospitalizations that resulted from child abuse and later injuries as a result of neglect.

The science is powerful

Much of Cummings’ opening statement focused on both the scope of the problem of childhood trauma and the “good news,” that children can heal.  He noted the warnings from a wide spectrum of researchers, medical professionals, and others that childhood trauma is “one of the most consequential and costly public health issues facing our nation today.

“The science is powerful,” Cummings said.

He also noted that damage can be healed, and children can become thriving and productive adults. He called for a robust approach to address the problem, signaling his intention to draft comprehensive legislation.

Members of the committee saluted the courage of the witnesses who told their personal stories of childhood trauma.

“I am so sorry you have to weaponize your pain in order for this and the survivor tribe to be seen and heard, but it is so critical for this work to be survivor-led,“ said Pressely.

DeSaulneir had a similar message for the witnesses.  “You are so powerful and what you did today made you…the most powerful people in Washington, DC, and it’s transformative.”

Several committee members acknowledged Pressley’s leadership in partnering with Cummings to schedule this unprecedented hearing. She mentioned her work on the Boston City Council where she served for eight years and organized seven hearings on trauma.

DeSaulneir referenced his time in Boston as a juvenile court officer and spoke about recent reforms in juvenile justice in California that have resulted in more children staying in the community rather than going to residential settings, a reform that improved lives and saved money, he said.

Strategies to prevent and address trauma

A wide range of approaches to prevent and address childhood trauma were offered during the hearing.

—Houry emphasized the critical role of prevention and pointed to Child-Parent Centers and the Nurse-Family Partnership model as well as the economic supports recommended in the CDC technical package, Preventing Child Abuse & Neglect: A Technical Package for Policy, Norm, and Programmatic Activities.

—Bethell recommended support for the use of the best, evidence-based practices and a requirement for every National Institutes of Health RFP (Request for Proposal) to consider trauma science.

—James Henry, former deputy governor and chief of staff for the State of Tennessee, said states and localities have to be committed and find solutions that work locally. He emphasized the importance of convening the key decision-makers and providing recurring (not one-time dollars) to support trauma-informed programs.

—DeSaulnier and Bethell spoke of building an infrastructure to support the reduction of childhood trauma. “We are losing people to early death because we don’t have the infrastructure to match the neuroscience and known evidence-based practices,” DeSaulnier said. “Our kids and their kids will look back on this time as both barbaric and transformative if we do what we need to do.”

Bethell said just as the US highway system connects the country, a social infrastructure will pave the way so that the evidence base of trauma combined with the knowledge of the impact of lived experiences of trauma are finally meeting with policy to create impactful programs and policies that will save money.

—Pressley inquired about the Self-Healing Communities model (SHCM) used in Washington state. Bethell briefly described the model and offered to send information on the results being achieved in the SHCM locations.

—Dr. Denese Shervington, clinical professor of psychiatry, Tulane University School of Medicine, addressed the impact of extreme natural disasters such as Katrina on communities where there is already a high-level trauma as a result of violence, racism, and poverty. Strategies to address trauma should recognize the compounding impact of natural disasters that are increasing across the country, Shervington said.

Politics mostly took a back seat

Politics entered the hearing room with discussions that included the 2017 tax bill and provisions of the Affordable Care Act (ACA). Republican members Jody Hice of Georgia and Bob Gibbs of Ohio asked witnesses if the increase in the child tax credit in the tax law would help reduce trauma by easing poverty.

Democrat Jim Copper (TN) raised the question of “the elephant in the room” that he said is the impact of states not taking the option under the ACA to expand Medicaid. (Click here for video of Cooper’s remarks—question regarding Medicaid expansion begins 1:47).

The witness responses were uniform. Medicaid coverage is essential in providing support to children and their families to prevent and reduce trauma.

Yet, while committee members expressed differences in policy, the overall tone of the hearing was bipartisan and respectful. Press said that even though the politics of members on the committee range from the very liberal to the very conservative, “the questions were focused on learning more about the issue and not scoring partisan points.

“This offers the possibility that the committee will be able to reach bipartisan agreement on at least the broad elements of legislation to address the problems identified during the hearing. While the devil is always in the details,” Press said,  “it is rare these days to have such a nonpartisan tone in any hearing room, much less in the Committee on Oversight and Reform.”

On the day of the oversight hearing, Press and other advocates made Congressional visits to raise awareness of the RISE bill and demonstrate local and statewide support for the legislation.

With the August recess coming up (the Senate recess runs from August 3 to Sept. 9; the House is in recess July 27 to September 8), advocates will be seeking opportunities to raise awareness and recommend policy approaches to their members of Congress.

For more on childhood trauma, go to ACEs Too High, where a version of this story first appeared.

And if you’re interested in learning more about  how people, organizations, systems, and communities are iworking with ACEs science, consider joining ACEs Connection, a companion social network launched by ACEs Too High editor and founder Jane Ellen Stevens.