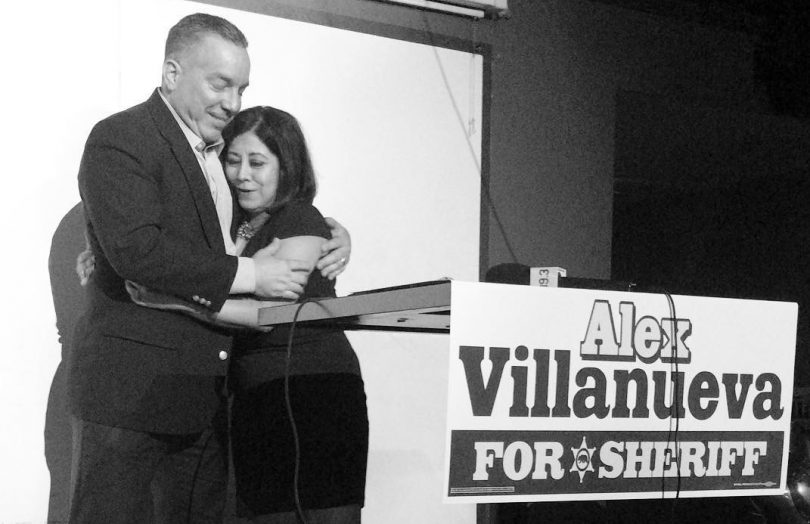 Will Alex Villanueva be the first challenger to unseat an incumbent in 100 years, for the position of Los Angeles County Sheriff?

Just under a million still-uncounted votes will answer that question.

Almost 60% of the uncounted votes are late coming vote-by-mail ballots, some of which were collected at the polls, others were mailed just before or on election day. Another 40% are provisional ballots, according to a statement released by the Los Angeles County Registrar-Recorder/County Clerk. 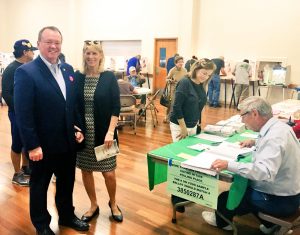 Both exhausted candidates and their respective supporters, however, will have to wait a while to find out who will lead the nation’s largest sheriff’s department for the next four years, since no one will reportedly even begin counting the last big pile of ballots until this Friday, November 9, as they are still coming in.

Both candidates claim to be upbeat, however. A source close to Sheriff McDonnell’s side of the race said that his campaign people believe that the late-coming ballots will favor the incumbent.

“I’m optimistic about the hundreds of thousands of outstanding vote-by-mail and provisional ballots that have not yet been counted,” the sheriff posted on the campaign’s Facebook page on Wednesday after the initial tally.  “I earned about 58% of the vote-by-mail ballots already processed. There are thousands more ballots in the mail. Every vote should be counted, and every voice should be heard.”

Villanueva told us on Wednesday that he has been led to believe the opposite, that it was his candidacy likely to prevail in the vote-by-mail count.

(By the way, if you’d like to see exactly how various neighborhoods in the county voted for the two candidates, using the votes already counted, the LA Times has a wonderful interactive map.)

Challenger Villanueva had a small campaign chest of only $156,000 to draw on, next to that of McDonnell’s, $1.2 million from individual donors, plus an $954,000 in additional cash from the Los Angeles County Professional Peace Officers Association (PPOA), which is the union for supervisors in the LA County Sheriff’s Department, plus an independent committee funding by a group of business donors. 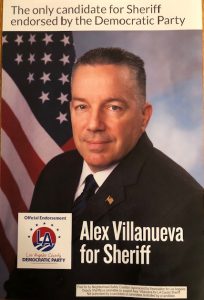 But Villanueva also had some big bucks extra support, much of it from the Association for Los Angeles Deputy Sheriffs, or ALADS, which is the union for the LASD rank-and-file, plus other labor groups, which collectively came up with over $1.3 million for his campaign.

The Neighborhood Safety Coalition, which was basically ALADS, spent much of their cash on glossy mailers, such as the one on the left, painting their guy as “The only candidate for Sheriff endorsed by the Democratic Party.”

Villanueva’s supporters also invested in aggressive phone banking, in which callers—most of them paid, not volunteers—dialed areas dominated by Latino voters, plus heavily Democratic enclaves such as Santa Monica, Topanga, and many parts of the San Fernando Valley, and more.

As in the primary election, when incumbent Jim McDonnell got 47.87 percent of the vote, but his nearly unknown, cash-poor opponent, surprised most everyone by getting 33.20 percent, in addition to the Latino communities, in the general election, 55-year-old, former LASD lieutenant Villanueva focused  on getting the support democratic clubs and organizations all over the county. According to his website, along with to the Los Angeles County Democratic Party, Villanueva managed to lock-up the support of approximately 35 other democratic clubs, some of which were very active with get-out-the-vote calls.

Villanueva’s Twitter and Instagram feeds show him appearing at gathering after gathering for many of the regional clubs, some quite small in size, others a lot larger.

His campaign got a large boost, in early August, when ALADS, announced its endorsement of Villanueva.

“Alex is one of us,” wrote ALADS president, Ron Hernandez in a much lengthier statement. “He has over three decades of experience as a deputy, has served in the United States Air Force and the California Army National Guard, and earned a Doctorate in Public Administration while studying the impact of diversity on law enforcement leadership. He has been a tireless advocate for deputies, especially during moments in the department’s history when it was necessary to speak truth to those in power.” 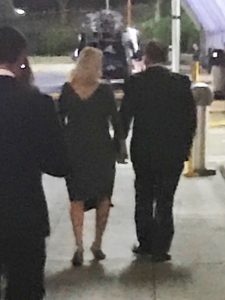 McDonnell also had far and away the longest list of elected officials, including Mayor Eric Garcetti, District Attorney Jackie Lacey, and four out of the five LA County Supervisors, among many others.

“We believe that Sheriff Jim McDonnell has the requisite experience, energy, and commitment to continue to lead one of the nation’s largest and most complicated law enforcement agencies through these particularly difficult times,” said Michele Hanisee, President of the Association of Deputy District Attorneys, in a statement that accompanied the LAADDA endorsement.

According to LA County Registrar-Recorder/County Clerk Dean Logan, the ballots we are all waiting for must be verified before they are counted, a process that takes place during what is known as the canvass period.  As this process proceeds, the vote tally will change (obviously) and those climbing numbers will be publicly posted every few days, to let the rest of us know how things are going.

So, if the obsessive among you want to follow along as the tabulating continues (we include ourselves among this group), here is the schedule of those announcements.

The first announcement was made on Friday, November 9, and now shows Villaneuva still ahead of McDonnell but only by 335 votes.

As you wait for new updates, keep an eye on the excellent series of stories that the LA Times’ Maya Lau, and some of her colleagues, have been doing on the important contest.