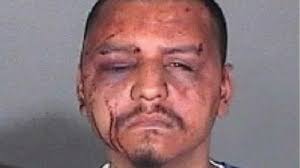 On Friday, January 18, a jury found Byron Dredd, a former LA County sheriff’s deputy, guilty of lying to the FBI as part of a conspiracy to cover up a brutal beating of a handcuffed visitor to Men’s Central Jail.

The incident that Dredd, 36, falsely described to the FBI began on the morning of February 26, 2011, when Gabriel Carrillo, his mother, and his then-girlfriend (now wife) went to Men’s Central Jail’s visiting center to see Carrillo’s brother, who had been roughed up during his arrest, reportedly causing family members to worry about his safety in the jail.

Both Carrillo and his girlfriend had cell phones in their possession when they entered the visiting center, which jail rules prohibit. After another visitor told a deputy that a young woman was using a cell phone in the bathroom,  the deputy led the girlfriend into a nearby employee break room.  When the girlfriend admitted that Carrillo also had a phone, he too was ushered into the break room, but in handcuffs, after he mouthed off to the deputy.  In the break room, the same deputy, Pantamitr Zunggeemoge, slammed Carrillo into a refrigerator, then yanked his hands, which were cuffed behind his back, up to a painful angle, at which point jail visitor Carrillo mouthed off again.

Deputies in the break room escorted Carrillo’s girlfriend out, then began beat the handcuffed man, repeatedly punching him, and spraying his face with OC spray as he writhed on the floor. Carrillo did not resist the beatdown, but made sort of swimming motions with his legs as he was being pummeled, trying to escape blows, according to Deputy Zunggeemoge, who took a plea deal in exchange for his testimony in the trial of three of the others involved.

Carrillo’s injuries were severe enough that he was later hospitalized.

Dredd was standing in an adjacent room watching the fight through a window.

After the beating, former LASD sergeant Eric Gonzalez, who was in the break room, came up with a detailed story for the official written reports of the incident. Gonzalez instructed the deputies involved to describe how they took off one of Carrillo’s handcuffs to fingerprint him, at which point Carrillo swung the handcuff chain dangerously as a weapon, and hurt then deputy Zunggeemoge.

During a July 2012 interview, Dredd perpetuated the false accusations when he told FBI investigators that he saw Carrillo hurt Zunggeemoge, punch deputy Fernando Luviano, and manhandle deputy Sussie Ayala, then attempt to escape the room—all actions, save the nonexistent room escape, that were impossible because Carrillo’s wrists were shackled behind his back.

As a result of false statements and reports made by Dredd and the others, Carrillo was charged with several felonies, including resisting an officer and battery. If convicted, he could have faced fourteen years in prison.

(Just before Carrillo was to go to trial, his attorney, Ron Kaye, discovered the existence of cell phone photos showing injuries to both of Carrillo’s wrists, corroborating his insistence that he was handcuffed during the beating by deputies.  This, along with a neutral civilian witness who also corroborated Carrillo’s story, finally persuaded the DA to drop the case.)

In June 2015, three of the department members involved in the Carrillo beating and subsequent falsification of reports of the incident—former sergeant Gonzalez, and former deputies Ayala and Luviano—went to trial, and were convicted on all counts. Zunggeemoge and another deputy, Noel Womack, took plea deals and became witnesses for the prosecution in the 2015 trial.

In September 2016, Byron Dredd became the last of six to be tried on the visitor center beating and cover-up case. A  jury acquitted him on two counts—one of writing a false report, and one of conspiring to violate Carrillo’s civil rights. Jurors deadlocked on the third count of making false statements to the FBI.

Federal prosecutors decided to retry Dredd on count number three, but the deputy’s lawyers attempted to have the remaining charge dismissed.  Their effort was denied by U.S. District Judge George King.

Now that Dredd has been re-tried and convicted of that final charge, he faces a maximum sentence of five years.

“All law enforcement officers will be held accountable for abusing their positions – whether that includes the illegal use of force or lying to cover up a civil rights violation,” said United States Attorney Nick Hanna after Dredd’s conviction. “This former deputy actively tried to conceal the illegal actions of his fellow deputies, and today a jury held him accountable for his role in the cover-up of an unjustified beating.”

Looked at from a distance, convicting a sheriff’s deputy of lying to FBI agents, after not one, but two federal trials, plus an earlier appeal, may not seem hugely significant.  But as U.S. Attorney Hanna suggested, Dredd’s conviction is an important piece of a larger puzzle.

According to the original federal grand jury indictment of the five main members of the jail beating group, the Carrillo beating was far from the only incident in which deputies abused jail visitors.

In another of the cases detailed in the original indictment, a jail visitor was allegedly slammed around by deputies to the point that his arm was fractured, all reportedly because he asked to see a supervisor when his combat veteran brother couldn’t be located in the jail.

The same longer indictment stated that former sergeant Gonzalez actively fostered a culture of abuse, reprimanding “deputy sheriffs he supervised for not using force on visitors to the MCJ if the visitors had supposedly ‘disrespected’ these deputy sheriffs through the visitors’ words or conduct.”

And in late 2015, U.S. District Judge George H. King made it clear that he wanted to send a message with the sentencing of Sussie Ayala, Fernando Luviano, and Gonzalez, whom King sentenced to six, seven, and eight years, respectively.

At Gonzalez’ sentencing, King told the sergeant he had “abused his authority and corrupted the very system he was sworn to uphold.”

When it was time to sentence Ayala and Luviano, King told the deputies they were part of a pattern, and that there was “evidence of prior violent behavior toward inmates” at Men’s Central Jail by Luviano specifically.

The ACLU’s historic class action suit against the department, Rosas v. Baca, suggested that Judge King’s perception about Luviano, in particular, was correct.

The Rosas complaint featured 70 signed declarations by victims of—and witnesses to—jail beatings.  Of those, WLA identified declarations by eight former jail inmates who described beatings, pepper spraying, threats of retaliation, and other troubling actions in which Luviano allegedly took part. In several of those eight accounts, two of them brutal enough to have resulted in high ticket civil settlements, the now-convicted Luviano was the main player.

But, until he was convicted for assaulting Gabriel Carrillo, Luviano was a department member in good standing.

Ayala, too, had a history of alleged misconduct and aggressive behavior, some of which was detailed in the original indictment.

Dredd’s conviction represents the last in a series of cases resulting from an investigation into corruption and civil rights abuses in the downtown LA County jails by members of the LASD. As a result of the investigation, 22 members of the Los Angeles Sheriff’s Department have now been convicted of federal charges, including former sheriff Lee Baca, and former undersheriff Paul Tanaka.

“The FBI will continue to hold accountable those who cover up crimes involving civil rights abuses and malfeasance by public officials inside and outside prison walls,” said Paul Delacourt, the Assistant Director in Charge of the FBI’s Los Angeles Field Office, after the jury announced their verdict on Friday.

“It is unfortunate that so many lives had to be negatively affected by previous decisions,” he said. “As a Department, we have to move forward, learn from our past, and provide the best possible public safety protection for the residents of this county. Working together, we will close this chapter in our Department’s history.”

Villanueva also stated that he had “complete trust” in the justice system, and he was “putting leaders in place who will continue our commitment to being one of the best law enforcement agencies in the world.”

U.S. District Judge Dale S. Fischer is scheduled to sentence Dredd on May 20.

The February 2011 assault on jail visitor Gabriel Carrillo resulted in a federal civil lawsuit that Los Angeles County settled in 2014 for $1.2 million.